WORLD: New challenges are emerging in Torture Prevention – In the Latest Issue of Torture Magazine 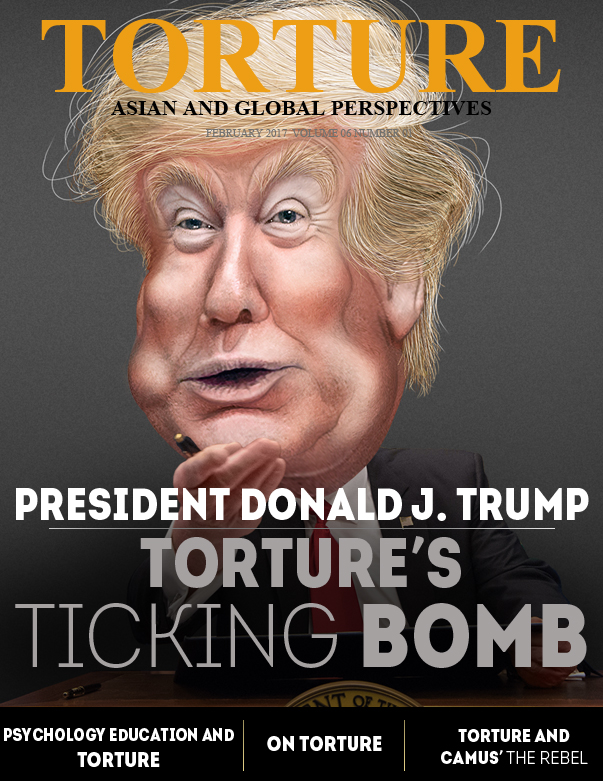 “74% of psychology students had received less than one hour of instruction about military medical ethics and most gave incorrect answers when tested on specific instances in which the Geneva Conventions apply, about when military personnel are expected to disobey unethical orders from superiors, or about how prisoners are to be treated,” J. Wesley Boyd revealed while quoting his recently conducted survey in an exclusive article for Torture Magazine.

Wesley Boyd, MD, PhD, is a Staff Psychiatrist, Cambridge Health Alliance and Associate Professor of Psychiatry, Harvard Medical School further noted that that “psychology graduate students are taught little about the professional standards that constrain unlawful and unethical practices and, in fact, may have a false sense of complacency about their knowledge of such matters.”

In our cover story, John W. Schiemann, Professor of Political Science at the Fairleigh Dickinson University, Madison, outlines Trump’s take on torture, “Bringing back torture was, of course, part of Trump’s war crimes-as campaign platform, along with intentionally targeting non-combatant civilian family members of ISIS fighters and taking Iraqi oil. Multiple times throughout the campaign he promised to bring back not just waterboarding and other CIA torture techniques, but “a hell of a lot worse.” He has offered, at various points, three rationales for doing so: it works, they deserve it anyway for what they’re doing, and, more recently, a plebiscitary justification that he would do it if the American people want it.”

“The political shock of joining the ranks of Iran, North Korea, Oman, Myanmar, Zimbabwe, and kindred regimes makes this step unlikely, even under a Trump administration that is throwing multilateralism out the window. Indeed, there are significant political obstacles to reviving torture,” he argues.

The latest edition also includes the republishing of Professor Henry Shue’s essay “On torture” wherein he examines the modern practice and its associated arguments and architypes. “When one reflects on what torture typically consists of – specially trained government agents holding a person captive and assaulting the structure of his personality by the most effective means known to modern psychology — one is strongly inclined to think that torture ought indeed to be absolutely prohibited, precisely as it has been by international law (Waldron 2005b: 1688-91; 2010: 191-94). The first step in the contemporary justification for torture is to attack the absoluteness of the moral and legal prohibitions with “a single mesmerizing example: the ticking time bomb”.

Our regular columnists Binoy Kampmark, Javeria Younes, and Ron Jacobs, give their contributions, while this issue’s guest column is written by Simon Chan.

Professor Juan Méndez, Former United Nations (UN) Special Rapporteur on Torture and Professor of Human Rights Law in Residence at Washington College of Law, pays his tribute to friend and colleague Professor Sir Nigel Rodley who recently passed away, reflecting on a trailblazer in the international protection of human rights.

The online version of Vol.6 No. 1 will be available on www.torturemag.org soon.