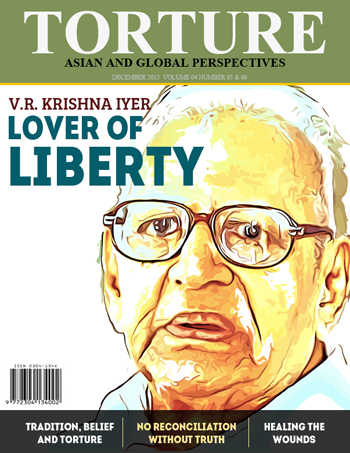 ( Hong Kong , 08 February 2016)“His judgement in the Indira Gandhi case in 1975 was controversial, and earned him both accolades and criticism. Krishna Iyer’s judgement snowballed the political crisis leading to the imposition of the emergency,”  Justice G.S. Singhvi, Former Judge, Supreme Court of India noted in his summary of one of the more than 700 judgements passed by venerated Supreme Court Judge, the late Justice V.R. Krishna Iyer.

“On July 12, 1975, the Allahabad High Court held Prime Minister Indira Gandhi guilty of corrupt practice in the Lok Sabha election of 1971. The judge held her election to parliament as void and barred her from contesting elections for six years. It is reported that before the filing of the appeal the then Law Minister H.R. Gokhale, a good friend of Krishna Iyer, went to meet him at his residence. He politely refused to see him and indicated that the correct way was to file the appeal in the Registry which would be taken up promptly”, he continued.

“Justice Krishna Iyer was always appreciated for his unique judicial contribution, not only in our country but globally. He was an exceptional judge. His judicial career signifies that a matured and scholastic mind can innovate laws and procedures, invigorate the system with dynamism and dedication, enthuse the functionaries with new thinking and accelerate the pace of progress through the instrumentality of law. He never opted for any position or work after retirement.” Justice G.S. Singhvi, delivered the first Justice V.R. Krishna Iyer Memorial Lecture organised by Campaign for Judicial Accountability and Reforms delivered the end of last year in New Delhi, India.

Contributing his own take on the late Justice V.R. Krishna Iyer, is the author of Judges of the Supreme Court of India: 1950-1989, George H. Gadbois Jr. Professor Emeritus of Political Science, University of Kentucky, USA, Gadbois observed:

“V.R. Krishna Iyer as a truly iconic  figure who is larger than life… The Supreme Court has not been spared from his biting criticism. He was very critical of the behaviour of some of the judges and of the process of selecting the ‘robed brethren’. A larger than life and truly iconic figure.”

“The first lesson, fundamental to life and law, that he learnt on the Bench, was humility without hubris and humanist hearing without “high bench” hauteur. The second value, which touched his judicial heart, was the compassionate treasury of the Preamble to the Constitution, particularly its five opening words – We, the People of India – as the democratic imperative which bound him.”

Late Justice V. R. Krishna Iyer was an Indian judge and minister who reformed the Indian criminal justice system, stood up for the poor and the underprivileged and remained committed to human rights. One of the conveners of the Asian Human Rights Commission, founded in 1984, he passed away in 2014, at the age of 99.

Meanwhile, recalling the repressive past in Sri Lanka, Basil Fernando remarks, “Collective guilt is a hard thing to swallow. That is the problem involved in the inability to mourn. However, as long as this is faced collectively, the imaginary grievances, imaginary heroisms and imaginary villainy of others are necessarily reflected on by society and the process of mourning can finally commence.”

The printed and online version of the issue will be available soon at www.torturemag.org

« INDIA: Police officer murdered for not submitting to corruption