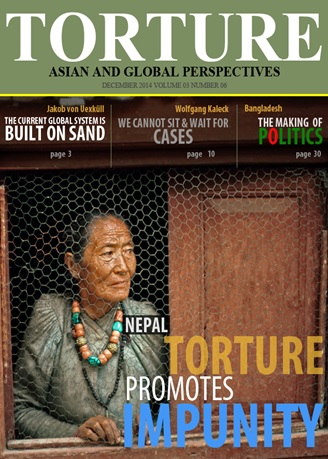 ( Hong Kong SAR, April 17, 2015) Despite the court order and provision in the 2007 Interim Constitution of Nepal, no law criminalising torture has been enacted. The Nepal Government failed to provide justice to survivors and punish perpetrators,” Kamal Raj Pathak, human rights lawyer from Nepal states in his latest paper, published in the new issue of the Torture: Asian and Global Perspectives (here after Torture Magazine).

Meanwhile talking to the Torture Magazine, Wolfgang Kaleck, German civil rights attorney and the General Secretary for the European Centre for Constitutional and Human Rights, says it is time to construct transnational and transgenerational networks transferring experience and knowledge.

“There is actually a lot going on in the younger generation of lawyers because many of the young lawyers are studying in countries other than their own and learning several languages. They see a future field of work in human rights. That is new and for me it is a source of hope. We often hear from older lawyers that the young are not political enough and lack long term political vision. Yet they do want to challenge human rights violations! We should construct transnational and transgenerational networks where we organise the transfer of experience and knowledge,” he said.

Kaleck has lectured extensively throughout the world and is US whistleblower Edward Snowden’s legal support in Europe. John Clancey, editorial adviser of the Torture Magazine caught up with him in Stockholm, Sweden recently.

“We cannot sit and wait for cases. We are very small with few resources so we think everything out fully. Yet we can react much faster than governments and corporations, so we always look for the optimal place, moment and tool. We want a continuous conversation because the problems we are facing are global problems,” he added.

In his article on the sociopolitical structure in Bangladesh, Morten Koch Andersen, programme manager for prevention of violence and rehabilitation of torture survivors at the Danish Institute Against Torture, argues that, “First, bad governance, misuse of authority and human rights violations are not singular disconnected entities but interrelated social processes that affects every corner of society. Second, as every person depends on exchange relations and networks for safety, security and livelihood, it appears wishful to expect substantial changes of conduct from within the state system.”

Torture Magazine also features two viewpoints on the recently released CIA torture report. Karen Malpede, an American playwright and writer, addresses the wrongdoing by the state. “We should apologise and pay retribution to the many innocent victims of our torture—those who were picked up by mistake, or sold to the U.S. by bounty hunters, who were rendered to black sites, and abused for many months or years—77 of whom remain to this day in Guantanamo, though officially cleared for release. We should make amends.”

Meanwhile, Lauren Glenmere, British human rights researcher and writer asks for lessons learned. “Let us refocus this debate. We need to acknowledge the true reasons for torture to have a hope of lessening its use. Let us no longer attempt to justify torture under the sanitised and ostensibly morally passable language of interrogation. It is when we are forced to really describe why we torture, why we deliberately inflict severe physical or psychological pain and deny the humanity of another, then any palatability is truly lost. “We wanted revenge”. “She needed to be punished”. “I enjoy torture”. 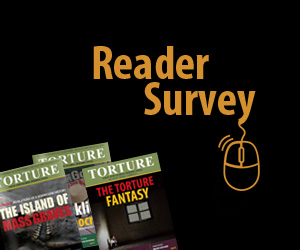 We are taking this opportunity to thank those who already take a part of our reader survey to improve our work in the future. Please participate in the survey if you have not yet done so and tell us what you think of the magazine.

Torture: Asian and Global Perspectives is a bi-monthly magazine which focuses on torture and its related issues globally. Writers interested in having their research on this subject published may submit their articles to torturemag@ahrc.asia

SRI LANKA: A call for prompt investigations into threats to lives of three journalists in Jaffna »