The Asian Human Rights Commission (AHRC) is forwarding to you an appeal from the National Coalition for the Protection of Workers’ Rights (NCPWR) regarding the murder of Edward Panganiban, a labour rights activist.

If you have any question, please contact the group’s email at: ncpwr.st@gmail.com and granahe.st@gmail.com

Trade Union and Human Rights Violations
Factsheet No. 1, Series of 2010

VII. Possible Motive: To sow fear and terror among Takata workers, and to discourage workers in other companies to form and join unions

VIII. Summary of the Incident

On June 2, 2010, Edward Panganiban left home aboard his motorcycle past 5:00 PM for night shift work. He had been on medical leave the past days (Panganiban was on medical leave supposedly for an eye surgery. Since he cannot afford the expenses, he postponed the operation but maximized the leave instead)

On way to the town center of Santa Rosa City, Panganiban was traveling on low gear since the main road is narrow and the village (Barangay Caingin) is crowded especially at this time of the day.

Along the road, four (4) motorcycles were lined one after the other. Panganiban on the first, another motorist on the second, a certain government employee on the third, and two men on board one motorcycle on the fourth.

Upon reaching De Lima Subdivision (this point about 1.5 km. from where Panganiban took off), the fourth and last motorcycle overtook the two in front of them.

Now behind Panganiban, one of the men called Panganiban by his name. Panganiban looked back. Suddenly one of the two men fired his gun to Panganiban. He was hit causing him to fall near the road gutter. The two men overtook Panganiban and ahead made a sharp u-turn to get back to him. At close range, the gunman fired a volley of shots on to Panganiban who was already lying helplessly on the ground. 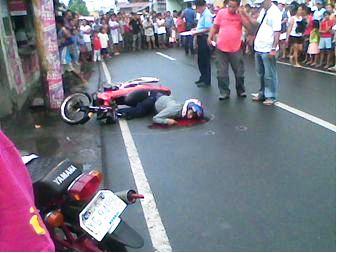 Immediately after this, the assailant pointed his gun to the two motorists behind them. Fearing for their lives, they jumped from their motorcycles. One ran to the left side of the road while the government employee ran towards Tubigan Water Refilling Station, a commercial establishment.

The assailants hit the high gear and left the crime site, going back to the direction of Barangay Caingin.

After 10 minutes, police arrived at the crime scene and cordoned the area. They restricted everyone from entry.

Meanwhile, a few meters ahead within the police line, a man aboard a motorcycle was taking pictures of Panganiban. The police did not mind him. After taking pictures, the man left.

IX. Background on the Incident

At the time of his death, Panganiban was the secretary of independent union Samahang Lakas ng Manggagawa sa Takata Philippines (SALAMAT-Independent) in the Japanese company Takata Philippines Incorporated in Laguna Technopark Incorparated. Also at this time, there was an on-going labor dispute. Takata management had been refusing to recognize the union and ignoring union’s intent to sit to a collective bargaining negotiation.

Before the murder, two (2) suspicious-looking men with a motorcycle frequented the Panganiban neighborhood. The neighbors described them to be well-built but their faces unidentifiable since they wore helmets and bonnets underneath. They never removed their bonnets even on one instance they were buying candies in a store. Though their faces irrecognizable, these were same men seen in the neighborhood on different occasions.

The two were seen on four occasions – before the national election, during the election day (May 10), after election, and on the day Panganiban was murdered. They were seen in the neighborhood on different hours of the day – daytime, nighttime, midnight or dawn. Although sure that these two were conducting surveillance operations, the neighbors had no idea for what purpose and who the targets were. However, there was an instance, a few days before the murder, when they asked one of the residents if Panganiban is from that village.

Aside from Panganiban, some union officers and active members were monitored and visited in their houses by operatives of the Intelligence Service of the Armed Forces of the Philippines (ISAFP), intimidating and dissuading them from conducting union activities. These occurred since 2007 until even after Panganiban’s murder.

During the process of union certification on January 2010, Takata management forced the workers to attend anti-union seminars facilitated by members of Alliance for Nationalism and Democracy (ANAD), a group actively engaged in red-tagging militant unions and other progressive organizations.

Justice to all victims of trade union repression and extra-judicial
killings!

We condemn in the strongest terms the brutal murder of Edward Panganiban.

At around 5:20PM on June 2, 2010 in Barangay Caingin, Santa Rosa, Laguna, Edward Panganiban was traveling on way to work aboard his motorcycle on a narrow road in their village. Two unidentified motorcycle-riding men in bonnets and helmets tailed him and suddenly fired shots at him point-blank. Panganiban died instantly, sustaining 12 gunshot wounds.

The family breadwinner, Panganiban, 27 years old, has been employed as a maintenance staff since 2004 in Japanese-owned Takata Philippines Corporation in Laguna Technopark Incoporated, Biñan, Laguna. Family and community members described Edward as a home buddy and spent most his time at work and at home. They also attested that Panganiban had no known enemies.

Panganibans death is clearly another case of extra-judicial killing. This brings the number of victims from the labor movement in Southern Tagalog region to 9, while 96th for the whole country (according to the documents of Center for Trade Union and Human Rights [CTUHR]).

The Arroyo government declared militant unions, such as Kilusang Mayo Uno (KMU), as targets for neutralization in its counter-insurgency campaign. Nevertheless, being an officer of an independent union and a low profile leader, Panganibans death is an outright statement that state forces do not spare independent unions from being targets of extra-judicial killings.

We, therefore, seek your solidarity in this moment of injustice.

3. In your capacity, hold protest and condemnation pickets in front of Philippine and Japanese embassies.

4. Any actions you deem necessary is welcome.

I am writing to call your attention on the brutal murder of labor leader Edward Panganiban who was killed on 2 June 2010 in Santa Rosa City, Laguna, Philippines.

I learned that at around 5:20 p.m. on that day, Edward Panganiban, a maintenance staff in Takata (Philippines) Corporation, was on his way to work aboard his motorcycle when two unidentified motorcycle-riding men in bonnets and helmets tailed him and suddenly fired shots at him point-blank. Panganiban died instantly, sustaining 12 gunshot wounds.

I was also informed that at the time of his death, there was an on-going labor dispute, with Takata managements continuous refusal to recognize the union despite its legitimacy and ignoring unions intent to sit to a collective bargaining negotiation. As secretary of the independent union Samahang Lakas ng Manggagawa sa Takata Philippines Corporation
(SALAMAT-Independent), Panganiban has been very active and vocal in demanding for workers rights.

It is also alarming to note that aside from Panganiban, most union officers and active members experienced surveillance operated by elements of the Intelligence Services of the Armed Forces of the Philippines (ISAFP) since 2007, threatening and intimidating them from conducting union activities.

I urge you to ensure that an impartial and effective investigation be conducted into Panganibans case. Any relevant information which could help in identifying the perpetrators must be taken seriously.

The Commission on Human Rights (CHR) and other relevant authorities must conduct an inquiry into the reported surveillance of labor leaders and their organizations and the reported anti-union seminars conducted by Alliance for Nationalism and Democracy (ANAD), a group actively engaged in red-tagging militant unions and progressive organizations.

Additionally, I urge you to ensure that adequate protection and security is afforded to potential witnesses and the family of the dead, as well as Panganibans co-workers.

Specific to the company, I urge Takata Corporation to respect ILO Convention 87 (right to freedom of association) and 98 (right to collectively bargain), and thereby recognize SALAMAT-Independent and start negotiating with them immediately.

I trust that you take action in this case.

SEND YOUR LETTERS TO: