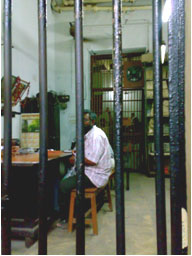 The Asian Human Rights Commission (AHRC) wishes to forward an appeal from People’s Watch Tamil Nadu (PWTN) concerning the arrest, detention and subsequent release of a human rights defender, Mr. Kirity Roy, in West Bengal. Roy is associated with MASUM a partner organisation of the PWTN that has jointly undertaken to document of torture cases in West Bengal. It is alleged that the police arrested Roy to harass MASUM and to hinder its work.

Mr. Kirity Roy, Secretary of Banglar Manabadhikar Suraksha Mancha (MASUM) has been arrested on 7 April 2010 from his residence at Serampore, Hooghly in connection with Taltala Police Station, case number 134/2008 dated 9 June 2008 and GR number 1487/2008 under Sections 120B; 170; 179 and 229 of the Indian Penal Code, 1860 by the Anti-Terrorist Cell, Kolkata Police. The police have registered the case against eight persons including Roy.

The police made the arrest pending the decision in a case at the Calcutta High Court filed by Roy challenging the legality of the police case. This case was to be heard by the High Court yesterday. The Court however did not hear the case and adjourned it to 21 April. The arrest is suspected to be a show of force and an intimidation attempt by the state police against Roy’s work and that of his organisation, MASUM.

A contingent of armed policemen of about 25 officers in civilian dress led by Inspector Mr. S. Ghosal, Inspector Mr. Biswas and Sub-Inspector Mr. Pervez arrested Kirity at about 9:45am from his residence at Srirampore, Hooghly district. It is alleged that the police officers did not follow the instructions of the Supreme Court as required in the D. K. Basu case and the Criminal Procedure Code, 1974. Police officer Mr. S Dhar, the Investigating Officer of the criminal case was not present when the arrest was made.

After arrest, the police produced Roy before the Chief Metropolitan Magistrate. The Magistrate released Roy on interim bail till 21 April.

MASUM organised a People’s Tribunal on Torture (PTT) at Moulali, Kolkata on 9 and 10 June, 2008. The tribunal is the part of a national project against torture undertaken by the People’s Watch, Tamil Nadu, supported by the European Union and the Friedrich Naumann Stiftung (FNSt). MASUM was responsible for implementing the project in West Bengal.

Nearly 1200 victims and their families were present in the public tribunal. As many as 82 victims of torture narrated their plight before the panel members consisting of illustrious persons of national repute. Justice Malay Sengupta, former Chief Justice Sikkim High Court and Dr. Mohini Giri, Former Chairperson, National Commission for Women were among those in the jury for the tribunal.

Officers from the Detective Department, Kolkata Police visited MASUM’s office before the tribunal, on 7 June 2008. The police questioned MASUM about the legality of conducting such a tribunal but refused to accept written replies.

Queries on the legality of the tribunal continued at the instigation of Kolkata police and a police case was registered at the behest of the Detective Department at Taltolla Police Station (Taltala Police Station case no. 134/2008 dated 9.6.2008) under sections 170 (Personating a public officer); 179 (refusing to answer public servant authorized to question); 229 (Impersonation of a juror or assessor) and 120B (Criminal Conspiracy) of the Indian Penal Code 1860, against Mr. Kirity Roy and other staff members of MASUM. It is noteworthy that Kolkata Police had also supported the activities of the tribunal by sending pilot cars for some of the members of the panel.

People’s Watch sent a complaint dated 12 June 2008 to the National Human Rights Commission against the registering of the case. MASUM challenged the constitutional validity of the criminal case in the Calcutta High Court and requested the court to quash the police case. This case, Kirity Roy V. State of West Bengal & others is pending consideration of the High Court as Writ Petition No. 25022(W) of 2008.

On 26 August, 2009 Justice Sanjib Banerjee heard the Writ Petition and dismissed the petition on the ground that police investigation is necessary to find out whether the petitioner (Kirity Roy) wished to organize a parallel judiciary in the country. Roy filed an appeal (MAT 1219/2009) along with a Stay Application (C.A.N. 10511/2009) against the order in the Division Bench led by Chief Justice Mohit Ranjan Shah and Justice Pinaki Chandra Ghosh.

On 10 March 2010, the case was fixed for hearing before the Division Bench as Item number 2. Mr. Sadhan Roy Chowdhury, advocate pleaded on behalf of the petitioner (Kirity Roy). He was assisted by Mr. Somnath Roy Chowdhury, and Mr. Debashish Banerjee, practicing advocates of the High Court, Calcutta. The Respondent/State also presented its case in the court. After an extensive hearing the Division Bench passed an order. The gist of the order is given below:-

This is to inform you that the above application for stay in the above appeal was taken up on 10/03/2010 by the Honble Division Bench comprised of the Honble Chief Justice sitting with the Honble Justice Pinaki Chandra Ghose.

After hearing the Learned Advocates at length Their Lordships have been pleased to pass an order staying operation of the judgement and order under appeal till the disposal of the appeal.

Their Lordships have further been pleased to pass necessary orders for expeditious disposal of the Criminal Case initiated against the Appellant, initiation of which is the subject matter of the writ Petition, and directing the State Respondents to file a report in this regard within a month.

Their Lordships were further been pleased to pass an order fixing the final hearing of the Appeal on 08/04/2010.

However, it is evident from the facts that nothing has yet been finalised. It is also evident that it is due to Roys involvement in human rights work and his continuing efforts to minimise atrocities committed by the police that he was targeted by the police and prompted the police to arrest Roy in a hurry.

Please write to the authorities mentioned below expressing your concern about the incident and the circumstances under which a criminal case is registered against eight human rights activists, including Roy.

Thank you for your solidarity
Sincerely