Home / News / PHILIPPINES: Resist the escalating fascism of the Duterte government Justice for Fr. Tito Paez and all victims of human rights violations! Stand for peace, Stop the Killings

PHILIPPINES: Resist the escalating fascism of the Duterte government Justice for Fr. Tito Paez and all victims of human rights violations! Stand for peace, Stop the Killings

A Statement from Hong Kong Campaign for the Advancement of Human Rights and Peace in the Philippines (HKCAHRPP), Bagong Alyansang Makabayan (BAYAN-Hong Kong/ Macau) and Promotion of Church People’s Response (PCPR-Hong Kong) forwarded by the Asian Human Rights Commission.

The Hong Kong Campaign for the Advancement of Human Rights and Peace in the Philippines (HKCAHRPP), Bagong Alyansang Makabayan (BAYAN-Hong Kong/ Macau) and Promotion of Church People’s Response (PCPR-Hong Kong) condemn in the strongest terms the escalating killings in the Philippines. For the past three days alone, extrajudicial killings have claimed the lives of church leaders Fr. Marcelito “Tito” Paez and Pastor Leovelito Quiniones, and eight Lumad in South Cotabato defending their ancestral land from a Philippine oligarch. 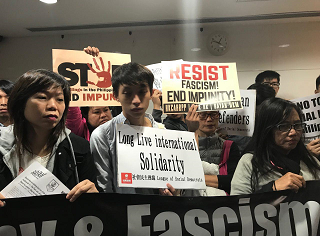 On December 4 at around 8:00 pm, Rev. Fr. Paez was shot while driving his vehicle at San Leonardo, Nueva Ecija. On that same day, Fr. Tito has just assisted in facilitating the release of political prisoner Rommel Tucay who was detained at the BJMP jail in Cabanatuan. During his stint as a parish priest of Guimba, Fr. Tito was active in advancing the human rights of people of Nueva Ecija and actively opposed foreign intervention and the presence of US military troops in the Philippines.

Meanwhile, Pastor Lovelito Quiñones of the Kings Glory Ministry in, Mansalay, Oriental Mindoro was shot by soldiers at around 8-8:30pm on December 3. Pastor Quinones was on his motorcycle, on his way home after facilitating food distribution and distributing the monthly supports for the 4Ps – government funded initiative to help the poorest of the poor in alleviating abject poverty – beneficiaries. The AFP, in their press statements, said that Pastor Lovelito was an NPA, an accusation belied by his family and the church. His family also recounted that the RMG (Regional Mobile Group) planted a .45 caliber pistol to make it appear that the pastor was indeed a member of NPA. Pastor Quiñones was tested negative during the paraffin test.

In South Cotabato in Mindanao, eight Lumad from the T’boli and Dulangan Manobo tribes were massacred by the Armed Forces of the Philippines (AFP). The said Lumad were part of the 140 families who have reoccupied their ancestral lands grabbed from them by the Consunji Farms for their coffee plantation and logging business.

The spate of killings, disregard for lives and rights, and the state of impunity show the heightening fascism of the Duterte government that is fast catching up with human rights violations against activists and ordinary civilians committed by previous administrations in the name of various counterinsurgency plans.

After Duterte’s declaration of all-out war against critics of his government’s anti-people, pro-oligarchs and pro-imperialist policies, political harassments, military operations and forced evacuations have intensified especially among peasants and indigenous peoples.

It seems the worst of Duterte’s fascism and tyranny has yet to come and the struggling Filipinos have to be ready for even more intensifying attacks to their lives and livelihood. Under Pres. Duterte’s command, the military and the police are in killing spree and make no distinction between armed and unarmed, combatant and non-combatant. Guns are pointed against human rights, justice and peace advocates, members of progressive groups and church people standing in solidarity with people in their struggle for land, jobs, justice and human rights.

Aside from abandoning the peace negotations with the National Democratic Front of the Philippines (NDFP), Duterte has also declared the CPP and NPA as terrorist organizations. This further diminished the hopes of going back to the negotiating table while also making progressive organizations and individuals vulnerable to prosecution and extrajudicial actions given the propensity of the government’s armed machinery to tag anyone opposing as members of the CPP or NPA.

Ultimately, Duterte’s government primary motive is to sow fear and terror in order to amass huge control of political and economic power that will pave the way for his anti-people and neoliberal agenda. Even the most archaic laws are resurrected to justify arrests such as that of transport group leader George San Mateo whose group PISTON has led actions to thwart the moves that will deprive jeepney drivers of livelihood for the benefit of oligarchs and foreign companies.

The Duterte government must be held accountable for these barbaric and dastardly acts against Fr. Paez, Pastor Quiñones and all victims of extra-judicial killings and human rights violations.

The Duterte government must realize that there is no amount of militarization, killings and filing of trumped up charges can stop the poor, the deprived and the oppressed Filipino people in attaining justice, human rights and peace. It will only fuel their resistance against the current structure and aspiration for a society that is truly humane, just and compassionate.

Justice for Fr. Tito Paez!
Justice for Pastor Lovelito Quiñones!
Justice for all victims of extrajudicial killings!
Continue the peace talks between the GRP and CPP/NPA/NDF
……………..

NEPAL: Government must move beyond partisan interests for realization of rights »