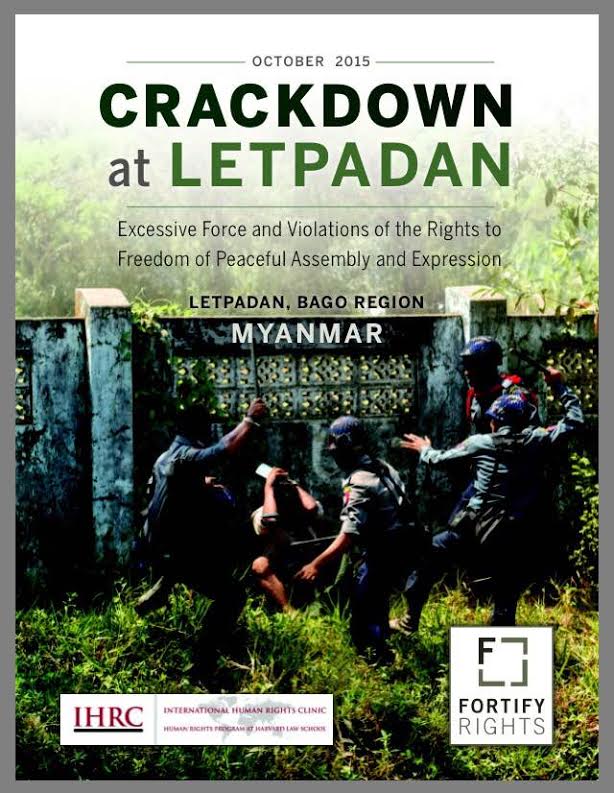 (YANGON—October 27, 2015) Myanmar police officers used excessive force during a crackdown on protesters and arrested more than 100 individuals in Letpadan, Bago Region in March, according to a new report released today by Fortify Rights and the Harvard Law School International Human Rights Clinic (“the Clinic”). Authorities should release individuals wrongfully detained for exercising their rights to freedom of peaceful assembly and freedom of expression, the organizations said.

Compiling evidence from dozens of eyewitness accounts, more than 500 photographs, and 40 videos, Fortify Rights and the Clinic found that police brutally punched, kicked, and beat unarmed protesters with batons on their heads, backs, and legs in the town of Letpadan on March 10. Police also beat protesters in police custody, including at least one protester being treated in an ambulance and others whose hands were bound behind their backs.

“The government should hold to account those police officers that used excessive force against the protesters,” said Matthew Smith, executive director of Fortify Rights. “This crackdown occurred in broad daylight. Police officers are clearly visible on film and in photos beating unarmed protesters, yet they walk free while the protesters are behind bars.”

The new report, Crackdown at Letpadan: Excessive Use of Force and Violations of the Rights to Freedom of Peaceful Assembly and Expression in Letpadan, Bago Region, Myanmar also details how not all police officers at the scene participated in violence during the crackdown. Some police officers used riot shields or their own bodies to protect protesters from attacks by other police officers, providing further evidence of the unjustified use of force by some officers.

Police arrested 127 protesters, journalists, and bystanders in Letpadan on March 10. Seventy-seven men and women of those arrested in Letpadan face charges that carry sentences of up to nine years and six months imprisonment. Several student leaders face multiple counts under a law relating to peaceful assembly, potentially adding years to their sentences. In the weeks and months following the crackdown at Letpadan, Myanmar authorities have arrested dozens of additional student leaders and activists for involvement in the protests at Letpadan and elsewhere.

“The decision of Myanmar authorities to prosecute protesters rather than those police officers that committed abuses doesn’t bode well for a country on the cusp of national elections,” said Tyler Giannini, Director of the Clinic. “Justice demands the authorities release those wrongfully arrested in Letpadan and drop charges against peaceful protesters.”

On September 11, the Myanmar National Human Rights Commission (MNHRC) issued a statement calling for police officers responsible for the use of excessive force at Letpadan to be disciplined. The statement alleged that the beating of protesters led to injuries, and that the protesters should not be facing charges under the penal code.

Fortify Rights and the Clinic welcomed the MNHRC’s investigation and statement on the events in Letpadan, but noted that it failed to address all the violations related to the protest and crackdown in Letpadan. In particular, the MNHRC failed to address restrictions on the rights to freedom of peaceful assembly and freedom of expression as well as the arbitrary arrest and detention of individuals connected to the protests.

Under international law, arrest and detention are unlawful when individuals are engaging in a protected activity, such as exercising their rights to freedom of peaceful assembly and freedom of expression.

In January 2015, protesters began to march south from Mandalay to demonstrate their opposition to the National Education Law passed by Parliament in September 2014. In early March, police blockaded the protesters at Letpadan. As the protesters attempted to challenge the blockade on March 10, police officers violently dispersed the group of 200 protesters.

“The events leading up to the crackdown failed to justify the massive wave of violence unleashed by police officers,” said Matthew Smith. “This crackdown is ongoing and reveals the shallow depth of human rights reform in Myanmar.”

PAKISTAN: Christians are required only as sweepers »