ASIA: NEW BOOK – CHILDREN AND VIOLENCE; THE POLITICS OF CONFLICT IN SOUTH ASIA 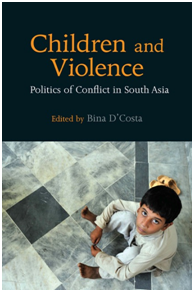 Those charting the history of conflict in South Asia with particular reference to violence against children may be interested in this recently released book edited by an Australian National University (ANU) Senior Fellow, Bina D’ Costa and published by the Cambridge University Press.

This volume is based on the premise that children’s diverse experiences during periods of conflict, post-conflict and peacetime reveal that their roles in society and in their political communities, such as ethnic, religious, linguistic and territorial, are complex. It further suggests that understanding these roles also involves a critical analysis of where the child is situated within her/his family, socio-political networks and within the state.

Tracing through various case studies in South Asia, a region that is marked as much by its homogeneity as by its immense diversity, the volume observes that significant tensions exist between universal and local approaches to childhood. It reflects how the development of international and national discourses on children’s rights and protection is relevant to children’s everyday lives in situations of conflict.

Children and Violence also underlines the impacts of a variety of political violence on children in the region. It puts forward the argument that in South Asia, childhood is culturally constructed and contested, that its diverse conceptualisations emerge from historical and social crises in the region and are the product of particular power relations.