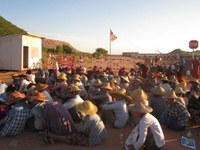 In the latest turn of events in the struggle against the Letpadaung copper mining project in upper Burma, about which the Asian Human Rights Commission has been campaigning since mid-2012, the government has issued an announcement ordering that demonstrators abandon their protest sites or face criminal action. In an attempt to make its order look less like those of old and more like one responsive to parliamentary processes, the government has dressed the order up with the pretext that a special state-level commission will visit the area to investigate whether or not the project should go ahead but that, “The commission will not be able to look into the project as usual if the project activities are suspended. The commission will be able to independently investigate and correctly assess the project only when it is running as usual” (Press Release No. 7/2012). So that the project run “as usual”, the logic goes, the protestors must first all leave.

This pretext for ordering thousands of demonstrators out of their strike camps is absurd. It is rather like saying that an offence–in this case, the partial or complete forcible eviction of some 26 villages from houses and farmland, and pollution and degradation of that land by unregulated heavy industries–can be investigated only when the offence is bing committed. The same principle applied to crimes would require the police to appear on the scene in the middle of a murder, assault or robbery or declare that as they were not present when the event occurred they are unable to investigate what has happened.

The pretext is also offensive, because while pretending to be responsive to protestors’ legitimate demands for an inquiry into the Letpadaung Mountains project, it is in effect stating that until the demonstrators and their demands go away, the government will not consider whether or not their grievances have any legitimacy. Like the hospital ward that works perfectly as long as it has no patients, the commission of inquiry can work perfectly as long as it has no complainants. The whole thing is preposterous, and hardly gives any cause for encouragement as to the likely outcome of such an inquiry.

Not only do the farmers and their supporters have legitimate rights to stay put and have their grievances heard by whoever turns up, but as the AHRC has previously pointed out, the orders declaring that the areas they occupy are off-limits themselves have no basis (AHRC-STM-222-20112). The manner in which the orders were issued may be consistent with those of military dictatorship, but they are not consistent with the contents of the law to which they claim to refer. If the current government of Burma wants to pretend that it has any more political and legal legitimacy than its predecessor, then it is going to have to do better than throw the same old rubbish at its opponents and claim that it is “legal”.

In this regard, the Asian Human Rights Commission is informed that already three leaders of the demonstrators, Han Win Aung, Ye Lin Kyaw and Naw Ohn Hla have been arrested and will be charged under section 18 of the 2011 Peaceful Procession and Marching Law with having organised people to demonstrate without first obtaining a permit under the law. The AHRC has studied the law carefully and rejects its provisions as anti-fundamental human rights and anti-democratic, and consequently, as a matter of principle it rejects these arrests and calls for the immediate release of all three accused persons.

Events at the Letpadaung Mountains are shaping up for a major confrontation because they put pay to the idea that Burma’s democratization process is primarily about the rights of its citizens, when in fact the army, former army officers and army-connected businesspeople, all of whom are involved in the current project, have their sights set on vast expansion of foreign investment and growth of business opportunities with as little accountability as possible. The farmers of Letpadaung and their allies are posing a challenge simply by virtue of the fact that their standpoint on democratization is that it is actually about democracy–the rights of citizens to stand up, have their voices heard, and resist unlawful and unjust attempts to take from them what they believe is rightfully theirs. For these reasons, they strongly deserve our support.