Home / News / PHILIPPINES: How could the ‘Maguindanao massacre’ have been allowed to happen? — Asian Human Rights Commission

PHILIPPINES: How could the ‘Maguindanao massacre’ have been allowed to happen? — Asian Human Rights Commission

(“We dont care about it, we dont know about it”  the Acting Head of the Provincial Police)

As it has been widely reported, 57 people-including two human rights lawyers and 30 journalists – were slaughtered on November 23 in Maguindanao, a province in central Mindanao. While much of the stories and worldwide condemnation focused on the number of, and manner of the deaths – describing them as gruesome, barbaric and animalistic amongst others things, the Filipino people, even in this country’s war-torn southern part, still grapple in disbelief as to how it could have happened.

It is incomprehensible, not only to the Filipino people, but the international community as to how, in an area with a modicum of governance and law enforcement and the right to the protection of life could have been so easily dismissed in a democratic state. How is it possible that a group of over 100 armed men, reportedly led by a scion of a powerful political clan, the Ampatuans, blocked a convoy of vehicles of over 50 people in broad daylight, took them to a remote hilly area, executed them and then buried them in shallow graves? 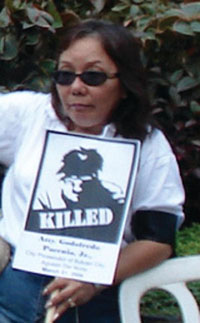 There were indications that the massacre was premeditated and thoroughly planned; for example, the graves where the 57 dead bodies had been buried had already been excavated using a government-owned backhoe. Its engine was still running when the soldiers arrived at the scene of the massacre after they had received reports of the incident. When the soldiers arrived, dead bodies littered the scene, vehicles used in the convoy were riddled with bullets and three of the vehicles had been flattened and buried together with the dead bodies. (Photo: Concepcion Connie Brizuela, lawyer, victim; source: Inqiurer.net)

Before the massacre happened, some journalists had already received information that should they persist in covering the filing of Certificates of Candidacy of (CoC) of Esmael Mangudadatu, they would be killed and buried. However, because they were given assurance by Alfredo Cayton, commanding general of the Army’s 6th Infantry Division, that they could push through telling them that area is safe, the group decided to proceed. The group also had seriously discussed matters on security arrangements for two hours before leaving. It was unfortunate though that organisers and the group of journalists may have underestimated the situation. Threats of this nature are common in this part of the country.

Mangudadatu is a bitter political rival of one of Ampatuan’s scions, Andal Ampatuan Jr, incumbent town mayor of Datu Unsay, a town named after him by his father, Andal Ampatuan Sr., who is also the incumbent provincial governor of Maguindanao. The younger Ampatuan is now considered the prime suspect in the slaughter, according to witnesses. After his arrest on Thursday, November 26, he is being held in detention at the National Bureau of Investigation (NBI) in Manila.

The carnage left Esmael’s wife, Genalyn; his two sisters, Eden and Farida Sabdula; several of his political supporters; two human rights lawyers, Concepcion Brizuela and Cynthia Oquendo; and 30 journalists dead. Brizuela and Oquendo were assisting Mangudadatus’ wife, Genalyn, to file the CoC on behalf of her husband at the provincial election office in Maguindanao while the journalists were covering the would-be filing. The event, in the local context, would have been a big story for local journalists as the filing was an act upon which the Mangudadatus, also a powerful political clan in the adjacent province, Sultan Kudarat, would be challenging the Ampatuans for a gubernatorial post.

The younger Ampatuan is reported to have been groomed by his father to run as governor for the May 2010 general elections. The elder Ampatuan is the close ally of the Philippine President, Gloria Macapagal-Arroyo and her party; and had served as the governor of Maguindanao, a province under the Autonomous Region of Muslim Mindanao (ARMM), for three consecutive terms as governor. Three of Ampatuans political leaders were expelled from the President’s political party because of the massacre.

The Ampatuans and the Mangudadatus are bitter rivals and powerful political clans in the local politics. In this southern part of the country, the notion of governing for the ‘common good of constituents, good governance, rule of law and human rights and democracy’ has hardly ever existed. The politicians’ motivation in running for public office is for protecting their territory, expanding their influence and cementing their de facto

In Shariff Aguak, the capital of Maguindanao, the display of wealth and power can be illustrated by the huge palaces that these political leaders of the province have built, dwarfing the town and shanties of their constituents. The province is one of the poorest in Mindanao, and is a long term recipient of foreign development aid. The constituents in remote municipalities have been for decades victims of massive protracted displacements, killings and abductions and summary executions either by the government or military forces in the decades-old conflict in Mindanao. Thus, the people’s threshold to violence is higher than other place, but the extent of this massacre is, even for them difficult to comprehend.

That the alleged mastermind, the younger Ampatuan, was reported to have been able to command and have given the order to kill the victims is well established and illustrates the local government’s policy in funding, training and recruiting militia forces. The Civilian Volunteer Organisation (CVO) is one of the government’s militia forces and is also accused of having been involved in the Maguindanao massacre. The functioning of the CVO should have been under the control and oversight of the Philippine National Police (PNP); however, the existing system is so heavily politicized, effectively making the police authorities underdogs of the politicians.

The top local executive has the authority to expel, appoint and recommend, for example, who should be the head of the provincial police and the head of the town police. The local executives also decide whether or not the local police and its security unit should be given budget allocations from the local government’s coffer for their operation. This deliberately brings the policemen and security units under the politician’s control and influence. The extent of the policemen’s control by the politicians has been affirmed and shown when Esmael, upon learning of the massacre, was told by the acting head of the Maguindanao provincial police when he sought his assistance that: “Wala kaming paki-alam d’yan, hindi namin alam ‘yan (We dont care about it, we dont know it).

After the massacre, the PNP had to relieve six of its top officials in Maguindanao for their alleged complicity–the chief of police of Shariff Aguak and Ampatuan towns and three other police inspectors from their position. According to the PNP though, they are not yet considered as suspects, but reports indicate that one of them, was seen by the witnesses to be present at the scene when the victims were executed. Also, it would be difficult to accept that these top policemen would not know of the presence of heavily armed men in their area of jurisdiction. The national highways of these towns where the convoy passed also had check points of only few hundred meter distance from one place to the other – either set up by soldiers, policemen or militia forces – thus, it is hard to believe that they would not know of the movement of armed men, unless they were complicit or had been co-opted.

When the convoy was blocked and the victims subsequently executed, reason dictates that the victims may have thought the perpetrators would not do such horrendous acts. They unfortunately walked to the grave virtually blindfolded for reasons that their numbers and composition – there were over 50 of them mostly women  that the town mayor who was the prime suspect, the government’s militia forces and armed civilians; and the policemen, who were seen by witnesses at the crime scene were all present. 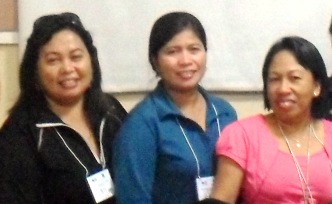 The killing of 30 journalists, mostly local journalists, is the largest number of deaths in a single incident in the Philippines’ recent history. It has virtually crippled the press freedom in this part of the country. The fight for press freedom and right to information itself is a notion that local journalists had struggled to fight for. Before the massacre, some of the journalists who were reporting on the corrupt practices of the government officials in these provinces were themselves subjected to threats. At least two journalists had already been killed in the past, one of whom was Marlene Esperat in October 2006 in Tacurong, Sultan Kudarat. (Photo: journalist victims, from left to right: Marites Cablitas, Gina Dela Cruz and Marife Montaño; source MindaNews)

As one of the eyewitnesses to the massacre said, they were just following orders when the alleged mastermind ordered them to shoot and kill not only the relatives of the Mangudadatus but also the human rights lawyers, the journalist; and all of those who had joined the convoy. This eyewitness had come out in an exclusive television interview but is said to have gone into hiding. There are also several other persons who had witnessed and survived the massacre but are too frightened to come forward.

The plight of the witnesses and the survivors also exposed the realities of the absence of any protection mechanism within the country. At least three of the journalists who survived the massacre sent feelers out to the Department of Justice (DoJ) informing them of what information they had to help the investigation and prosecution of the case, but they (the DoJ) paid no attention, according to the survivor’s family. Like the eyewitness, these survivors too had to take their own security measures to protect themselves. It is also not practical to seek for a police escort since one of the policemen relieved from his post was once assigned in the survivors’ hometown; and given the small community of journalists there–who often covers the police and military beats–even without exposing their names, those who want them dead know where they can be located.

Also, how could the survivors consider asking for police protection when, in fact, prior to covering the filing of CoCs the Mangudadatus, had already sought police and military protection. Such request was rejected. The military had to excuse themselves saying they were unable to provide escorts because their troops were deployed somewhere and that providing escorts is primarily a police duty; while the policemen to whom the group had sought security escort for the convoy turned out to have reportedly were complicit or had taken part to the massacre.

PHILIPPINES: Three journalists who survived the Maguindanao massacre fear for their lives »