Home / News / SAUDI ARABIA/SRI LANKA: Rizana Nafeek stated to court that her confession had been taken under duress

SAUDI ARABIA/SRI LANKA: Rizana Nafeek stated to court that her confession had been taken under duress

A Statement by the Asian Human Rights Commission

INDIA: World Food Day and International Day for the Eradication of Poverty: Do not give food, give the ‘right to food’ 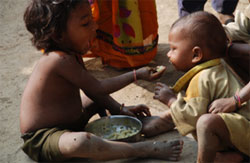 India is a country moving too slowly to ensure food and health security to malnourished children. The Global Hunger Index 2009 shows that the child malnutrition and child mortality rate in India have not improved even slightly. In the last twenty years, the hunger index of India has decreased only 7.8 points from 31.7 to 23.9. The index of South Asia on average is 23, which is higher than the 22.1 average index for Sub-Saharan Africa. The Government of India has contributed to maintaining the high index along with its neighbor Bangladesh.

The domestic data of the National Family Health Survey (NFHS) also says that the proportion of underweight children under three years old has reduced only one percent from 47 to 46 in the last seven years. Moreover, given the fact that the government cannot collect all data from all the villages and tends to underestimate the reality, the number of malnourished children is thought to be more than 46 percent.

However, according to the economic report by the Ministry of Finance the overall production of food grains during 2008-09 has increased, as compared to 2007-08, despite drought and other climate-effected natural disasters which affected food production this year. Furthermore, food distribution to the poor and malnourished children by various government schemes have also increased this year along with fantastic economic growth and the development of science and technology. The food production growth rate shows therefore that the problem is not with production but with the structure of food distribution.

In the last year sixty two malnourished children in 28 villages in Madhya Pradesh died in the gap between these two extreme scenarios. Again this year more children in the villages died of malnutrition and still suffer from hunger. Madhya Pradesh has the highest hunger index among states, followed by Jharkhand and Bihar according to the India State Hunger Index 2008.

The Asian Human Rights Commission (AHRC) by reporting Hunger Alerts have highlighted many situations of child malnutrition and government failure to prevent the deaths in Madhya Pradesh. The AHRC has observed that the government, who holds the key to alleviating malnutrition and poverty, has not made authentic efforts to lead substantial improvement. Rather, the state governments are accustomed to denying the deaths of children from malnutrition and thus ignoring their obligation as a member of international society to achieve the Millennium Development Goals and to obey International laws.

Importantly the tribal and low caste communities fighting against child malnutrition and starvation do not have access to food and other sources to guarantee their food security. The population engaging in the agricultural industry amounts to 17 percent of total GDP in 2008-09 an industry that is made up of nearly 70 percent of the total population. Nearly 60 percent is comprised of small, marginal and landless farming households, who mostly belong to tribal or low caste communities in the villages. The children of these households suffer from malnutrition.

The unequal opportunities in education and knowledge and the inherited poverty, due to caste-based discrimination which strongly exists in rural areas, allow people to depend only on farm labour, daily casual labour or migrant labour. The farmers who do have small or marginal farmland do not have accessibility to food security as they do not have other resources to harvest infertile land. The AHRC has observed that they have to migrate to other districts or states after farming which creates not only food insecurity but also life insecurity.

However, even these government-led public schemes do not fully reach the poor. In many cases, which the AHRC has highlighted in the past three years, corrupt government officials and influentials in the villages, who are usually upper caste persons, have extorted the benefits from the poor who are entitled to get them. The existing laws fail to punish those officials who commit a crime of violating right to food. Not a single official or public servant has been brought to court. In fact, economic or social rights like the right to food have not been protected by law, but rather have just been given bread after death.

The human rights group Vikas Samvad working in Madhya Pradesh also gives its opinion that the state has the highest number of malnourished children and it is not because the Integrated Child Development System (ICDS) is not functioning properly. However, the taking away of resources and unaccountability in the system are major concerns.

In particular, Vikas Samvad estimated that the government development projects have resulted in the displacement of two million people in last three decades in Madhya Pradesh alone. The majority of the displaced families belong to tribes. The government is violating its own law by evicting tribal families from their farm land and violating community rights, even after the implementation of the Recognition of Forest Rights Act 2006.

A vicious cycle of malnutrition and poverty will be never-ending in India unless the poor are given the full right to food, rather than just food alone. The national food security law currently under discussion cannot contribute to the eradication of child malnutrition and poverty if it is merely concerned about food distribution. In order to create food justice it should be a law guaranteeing the right to food by equal distribution of resources and education, authentic implementation of public schemes and punishment before the law of public officials who violate the right to food, this is truly food justice.

« INDIA: World Food Day and International Day for the Eradication of Poverty: Do not give food, give the ‘right to food’

BURMA: Two men and a woman are illegally jailed for allegedly getting money from abroad »