BURMA/MYANMAR: An end to sham politics

The results of the 2015 general election held on November 8 in Burma, or Myanmar, have slammed the door shut on the sham politics of the last five years. Gone are the days of a concocted legislature comprising for the most part of yes-men and sleepy heads. With this election, people in Burma have not spoken but rather have shouted resoundingly that they want no more of the pretense of politics. They demand the real thing. A new era has truly begun. 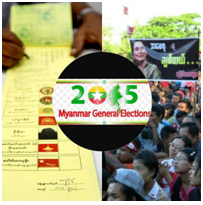 Although the official results are still being released, according to the latest estimates, the National League for Democracy led by Aung San SuuKyi will get at least 255 of the 330 lower house seats and 135 of the 168 upper house seats in the national legislature that are up for election. Of the remainder, the army-created Union Solidarity and Development Party, the NLD’s purported main rival, looks set to get a mere 29 lower house and 12 upper house seats.

Among the new representatives are over a hundred former political prisoners, many of them people on whose behalf the Asian Human Rights Commission in earlier years issued urgent appeals, among them people with whom the AHRC has worked closely for many years—people like senior lawyer and human rights defender U Aung Thane, elected to the upper house. We congratulate all of them on their magnificent achievement.

Much of the commentary abroad has concentrated on the success of the NLD and defeat of the USDP, which turned out to be a pathetic and meaningless prop. The results have shown, as they did in 1990 when the last freely conducted general election occurred, that Burma’s soldiers have no aptitude or possibility of transforming themselves or their proxies convincingly into politicians. People of all walks of life right across the country have again shown that, unlike the army officers who have presumed to take a leading role in the country’s politics for the last half century, they are not stupid. A few buffoons taking off their uniforms and masquerading as parliamentarians will not so easily fool them.

But it is not just the USDP that has been totally exposed by Burma’s voters for the bogus institution that it surely is. Practically all of the fabricated parties that contested the fraudulent 2010 elections have been obliterated. These parties include many minority ethnic parties that ran in the place authentic political groups which struggled for over two decades for this moment. The people setting up these parties, businesspeople with army connections, former bureaucrats and others who failed to fight for political freedoms when it mattered most also have failed to convince anyone of their authenticity. Instead, parties like the Shan Nationalities League for Democracy, most of whose leaders were imprisoned throughout the 1990s and 2000s, have been restored to their place in the legislative process, winning 12 seats in the lower house, and three in the upper.

In the country’s west, however, the rise of the Arakan National Party represents a new and dangerous phenomenon, and one that brings us to the question of who has been disenfranchised through this otherwise happy election outcome. Extremist ethno-nationalists have taken seats across the north of Arakan State, bordering Bangladesh, through the expedient of excluding Muslim candidates and denying the vote to hundreds of thousands of Muslims as well.

But it is not just in the west that the disenfranchisement of Muslims is a problem. Muslims who applied to run as candidates in these elections were rejected by the Union Election Commission on spurious grounds that they did not have paperwork to prove their identities as nationals of Burma. None of the handful of Muslims who succeeded in running got elected. Thus a country in which perhaps seven per cent of the population is Muslim will not have a single Muslim representative in its 664-member national legislature—barring the almost inconceivable event that the army would appoint a Muslim army officer to one of the 25 per cent of seats that it reserves for its own personnel.

Furthermore, that 25 per cent military bloc means that despite its massive victory, ultimately, the NLD will still be in a power sharing arrangement, one in which the army continues to occupy a quarter of seats in the legislature: a role that, among other things ensures that it can block any attempt to amend the constitution, for which it was responsible. The army also continues to appoint its own personnel to key ministries, including home affairs—responsible for the police, prisons and general administration departments across the country—defence and border affairs. And, institutionally it remains in every respect beyond the purview of the legislature or any civilian politician.

So the days ahead to the formation of the new parliament in 2016 are still long, and the arrangements for a transfer of power, which in the past has proven to be the main hurdle in Burma’s electoral process, still to be sorted out. Nevertheless, the election’s achievement is in showing that people who were denied power for so long now have again unequivocally secured the right to exercise it.