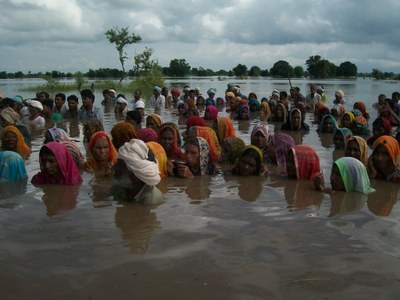 AHRC is deeply perturbed with the crackdown on the Jal Satyagraha in Khardrapani village of Madhya Pradesh’s Harda district. Here, villagers have been staying in neck-deep water for the past 15 days protesting against state’s decision of increasing the water level in Indira Sagar Dam to 262 meters without compensating the villagers for the loss of land and livelihood the decision has caused them. Being peeved at the indifference and apathy of the government towards their legitimate demands had, in turn, caused the desperation leading to the protest. 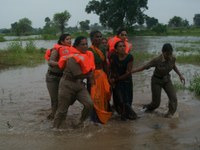 We have learnt that the government acted in most inhuman way by first imposing IPC 144, that declares any gathering of 4 people or more unlawful, on the area and then started a massive mobilization of police personnel numbering more than 800. The police officers, throwing all democratic norms out of the window, started with disconnecting the cables of the OB vans of electronic media present at the protest site so as to erase evidence of their action. It is needless to say that they did it also for preventing the  outside world seeing the pictures of their wrongdoing. The police, then, entered the water and ‘fished’ the protesters out using excessive and disproportionate force. 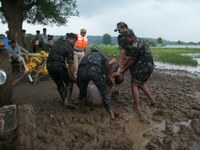 That the ‘police action’ followed threatening statements issued by Mr. Kailash Vijayvargiya, a cabinet minister in the state government, betrays its complicity. He has threatened the people yesterday by telling them that the state is ‘all powerful’ and they knew how to deal with them. As if making such an antidemocratic statement giving license to the administration committing atrocities on the citizens it was oath bound to protect, the police actually carried out the order in most cruel way amounting to ill treatment of people.

We condemn this attack, which is an unambiguous violation of basic rights of Indian citizenry including the most impoverished sections of it like indigenous people who are desperately trying to attract the attention of the government and the fellow citizens regarding their plight. We call upon everyone to condemn this crackdown and stand in solidarity with the people fighting for their legitimate rights.  Here are some of the photographs so far available with us.
In addition, we will provide more information as soon as possible.

« THAILAND: Review of the extension of the enforcement of Emergency DecreeI the Southern Border Provinces (SBPs)

INDIA: Thuggery is no administration  »