Home / News / BANGLADESH: Aspirations for democracy and the rule of law cannot be defeated by authoritarianism

BANGLADESH: Aspirations for democracy and the rule of law cannot be defeated by authoritarianism

Bangladesh’s incumbent government, its law-enforcement agencies, and its Judiciary, complement each other in maintaining the spree of gross human rights abuses. They have operated in tandem to intensify the pattern of human rights violations to a new level in the nation’s history. The country’s gruesome human rights realities have, apart from numerous other things, contributed to changing public knowledge and perception about institutions of the State, heightening alienation.

The ongoing unabated enforced disappearances tell the truth about Bangladesh’s judicial independence and political bankruptcy. The State has reintroduced enforced disappearances in a big way for the first time since the mid-1970s, and institutionalized this “crime against humanity” in the last eight years. Over 320 enforced disappearances have been recorded since January 2009, including 84 in the last 11 months of 2016. The pattern consistently being applied in disappearing the people involves denying the involvement and responsibility of the law-enforcement agencies and preventing access to the justice mechanism. This showcases the country’s justice institutions and rights realities.

Similarly, extrajudicial executions have been institutionalized in the law-enforcement systems in such a fashion that denial of justice to the victims is the only guarantee. Since January 2016, over 160 people have already been extrajudicially killed. Whatever crimes law-enforcement agency personnel commit, they enjoy immunity; the Constitution and laws of the land be damned.

Torture is conceived as an inseparable part of law-enforcement and crime investigation, one that facilitates the process of extorting people’s wealth and renewing political power. So is the use of illegal arrests leading to prolonged arbitrary detention for numerous people who end up languishing in prisons and at other disclosed and undisclosed detention centers.

The other freedoms, such as the freedom of press, expression and opinion, either in print, electronic or virtual spheres, is only allowed to the extent allowed to a caged bird, permitted only to sing songs that soothe the rulers. Likewise, freedom of association and assembly in all spheres, from socio-politics to culture, are at the absolute mercy of the incumbent regime. Practicing of diverse religious or ethnic beliefs encounter more challenges than ever, often with violence facilitated by the government. Grabbing the wealth of the ethnic or minority communities by influential groups is now inevitable, given ruling party leaders are on missions to plunder the wealth of minority communities. 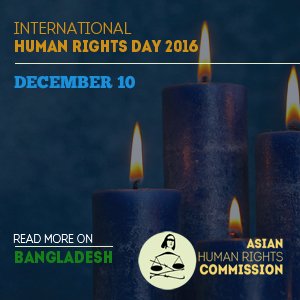 Once in a while the higher Judiciary comes out with a so-called landmark judgment to pretend that it maintains a certain quality. As a matter of fact, the same institutions never hold any public servant, be it a policeman or a judge, accountable for not implementing their landmark order. Thus, the Judiciary passes few orders in compliance with normative standards for its own survival, as such jurisprudence is not put to practice. In another words, the Judiciary, from the Magistrate’s Courts to the Supreme Court, is meant to be deaf and dumb in the face of growing coerciveness of law-enforcement agencies. The justice institutions repeatedly prove to the public that the institutions do not have any business in protecting people from State-orchestrated human rights violations or to ensure ‘justice’ to victims. Bangladesh’s justice institutions, designed to protect the elites at the costs of the lives, liberties, and livelihoods of the ordinary masses, wish to keep surviving just so, as facades.

The consequences of the ongoing inter-institutional complementary process of human rights violations and denying accessibility, availability, and affordability of justice to the victims are high. The government and the justice institutions are collectively traumatizing the entire nation.

Particularly, victims of torture and those whose limbs have been shot at, and the families of enforced disappearances and extrajudicial killings, are all going through unthinkable psychological agony and socio-economic hardship. The country’s social fabric – in terms trust in society – among ethnic and religious communities – has been rapidly and severely damaged in recent years. The ordinary people, most of whom are poor, are being forced to spend whatever savings and assets their families have for saving their lives, limbs, and liberties from coercive institutional practices.

The wealth of the ordinary hardworking masses is being forcibly snatched through the coercive institutions and the goons of the ruling political parties. Many are fleeing the country while others are still searching for options to escape beyond national the boundary, and this is causing a huge influx of Bangladeshi migrants, regionally and internationally.

All that said, Bangladesh’s history suggests that the vast majority of the people are ever ready to strive for democracy and rule of law, for the establishment of ‘equality’, ‘human dignity’, and ‘social justice’. This drive, and the collective inability and failures of the State and its institutions, will ultimately pave the way for victims of injustice to get together and push for radical changes in the flawed systems. It is the people, whose aspirations for justice prevail despite all odds, who will ultimately defeat all that plagues Bangladesh, including the authoritarianism that marks its present.

« SRI LANKA: AG asked to appeal from a Judgement of the Puttalam High Court as the decision amounts to a miscarriage of justice

INDIA: Neither democracy nor justice as core values »