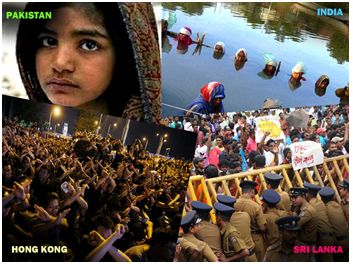 Last week we reported on three great protests taking place in Asia. We will now add a fourth from Pakistan where there was a worldwide protest against the charging of a 14-year-old girl, Rimsha, under the notorious blaspheme law.

We can now briefly look at the partial results of these protests. In India the protestors at the Omkareshwar Dam, who took to standing neck-deep in water to protest the failure of the government to implement the orders of the Supreme Court relating to their lands, won worldwide attention as the media in India and also the international media highlighted their protest. There was an expression of outrage within India and strong calls on the government of Madhya Pradesh condemning their neglect and demanding immediate attention to the problem. This led to a reaction from the government of Madhya Pradesh which initially promised to send two ministers to meet the protestors. The Madhya Pradesh Chief Minister, Shivraj Singh Chouhan, agreed to reduce the water level in the Omkareshwar dam to 189 metres and set up a 5-member panel to review the demands of the local people within the next 90 days. He also agreed to rehabilitate the displaced protestors.

This is a partial victory for the protestors. However, the protest will continue until the final settlement of all the issues which led to the protest.

In Hong Kong the hunger strike and occupation by the students demanding the immediate withdrawal of the proposed introduction of a new curriculum to include moral and national education replacing civic education which, in the past was not compulsory, gained massive support from the local population. By last Saturday (September 8) huge crowds gathered at the occupation site to support the hunger strikers and the students. By Saturday night the government announced that it was scrapping the mandatory Chinese civic education subject, leaving each school to decide on the implementation of moral education. The hunger strikers and the students engaged in the occupation saw this as a partial response by the government to their demands and called off the hunger strike and the occupation. However, the university students will continue with their proposed plan for a one-day strike demanding the complete withdrawal of the government proposal. The students will continue their protest until the entire plan is completely withdrawn.

In Pakistan the protest against the filing of blasphemy charges against 14-year-old, mentally disturbed Rimsha, led to a global protest and the court granted bail and released her. The government provided armed guards to move her out of the court and take her away to a waiting helicopter. Meanwhile, the cleric who made the false charges against her was arrested and charged with instituting a false case and also for committing blasphemy for burning some pages of the Koran which he used to plant the evidence on the girl. This is the first time a cleric has been charged with instituting false charges of blasphemy.

In Sri Lanka the students who were protesting in Colombo in front of the Grants Commission were arrested by the police and tear gas was used to disperse the students engaged in a peaceful demonstration. Later the government spokesman announced that the students would be investigated and charged for allegedly attacking the police.

While all three of the other protests led to partial responses from the authorities the response of the Sri Lankan government was completely negative and further the government also used violence against peaceful demonstrators. It has become the usual practice of the Sri Lankan authorities to take a completely negative approach to protests and to use violence to stop such protests and thereafter blame the protestors for instituting the violence themselves. Even the slightest space for democratic protest is denied to protestors who take to the streets on the basis of very genuine demands. The Sri Lankan government has closed the democratic space for all protests. Besides this while in all the three other protests there was wide coverage in the media, in Sri Lanka the media has been so suppressed and the coverage of the student’s protests was minimal. Intimidation and generating a fear psychology is the strategy that the government adopts relating to all protests however peaceful and legitimate these protests are.

NEPAL: The ALRC urges Nepal to invite new UN Special Rapporteur on transitional justice to the country without delay »