The Asian Human Rights Commission (AHRC) strongly condemns the Nepal Police who arrested Dr. C. K. Raut and more than two hundred supporters of his campaign. They came from different districts of Nepal’s Terai. Excessive force was used. Illegal arrests were made. By contrast, Dr. Raut and his supporters were commemorating 25 November (Mangsir 10, 2071) in a peaceful manner, as anti-racism day. 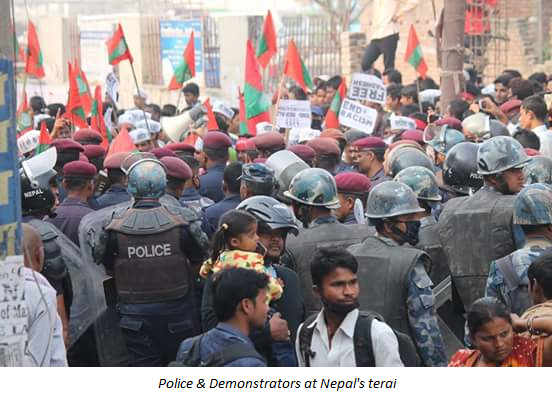 Dr. Raut and his supporters decided to observe 25 November 2016 as more than an anti-racism day. They wanted to remember the racism that the three Hundred Madhesis suffered after being arrested in Kathmandu on 26 November 2014 for being black. Last year, in November 2015, some 150 persons were arrested from different districts of Nepal’s Terai.

According to information provided by local human rights defenders, Dr. Raut and his 73 supporters were arrested by one hundred police officers. They were gathering at Barabigah of Janakpur, Dhanusha District where Dr. Raut was to deliver a speech. Likewise, were, 55 supporters from Nepalgunj, 19 from Nawalparasi, 70 from Rupandehi, 7 from Kapilvastu, 50 from Rautahat, 19 from Morang, 7 from Jhapa and 13 from Parsa Districts arrested by the police.

Supporters, other than Rupandehi and Banke Districts, were released the same day at 10:00 pm. Most of the protestors were participating in rallies and chanting slogans in support of Dr. Raut and Madhesh. In many places, when the police came to stop the program, the supporters tried to facilitate mass arrests, but they were not successful. The police ended up beating and forcefully arresting them. About 50 supporters were injured due to police assaults.

In the Rupandehi District, the police came, led by Police Inspector Dilip Raja Jha. He illegally arrested 70 people, including by-standers. Police rushed and forcefully attacked the group, kicking and punching them. They were remanded in the District Police Office (DPO) Rupandehi. Here, non-Madhesi detainees were forced to beat Madhesi detainees. Deputy Superintendent of Police (DSP) Bel Bahadur Pandey threatened to shoot them. As a result of this torture in the Rupandehi district, 28 protestors were injured.
In the Nepalgunj District, 150 police officers were mobilized to arrest 55 Madhesi supporters including their spokesperson Abdul Khan. The police vigorously dismantled the rally, and lathi-charged them before making illegal arrests. Some of them were released the same day at 10:00 pm.

Most of those arrested were tortured. Bamboo sticks and plastic pipes were used to subdue the protestors. In addition, the police threatened to revoke their citizenship if they continued supporting Dr. Raut. Police Officer Bir Bahadur Thapa was a perpetrator of the torture. Because Irfan Sheikh, Abdul Khan, Rajendra Paswan, and Harpal Singh had additional torture, they experienced difficulties with mobility. They have informed the AHRC that other non-Madhesi detainees were used to beat Dr. Raut’s supporters.

All of the arrested supporters were released at 5:00 pm on 27 November.

The AHRC reiterates its position that the Right to Peaceful Assembly and the Right to Free Speech must be respected. The government of Nepal needs to adhere to the international conventions it has ratified, and is a party to. All those who suffered injuries should receive urgent pro bono medical treatment. Any police officers who were involved, and used detainees to torture Dr. Raut’s supporters, must be subject to internal investigation, and departmental sanctions.