According to information provided by Protection International to the Asian Human Rights Commission (AHRC), human rights defenders and other members of the Klong Sai Pattana community in Surat Thani province have been intimidated and threatened with eviction from their homes and villages. The Asian Human Rights Commission is concerned that the in the general atmosphere of lawlessness created by the 22 May 2014 coup by the National Council for Peace and Order (NCPO), very few avenues of protection remain for the human rights defenders and other community members in Klong Sai Pattana. 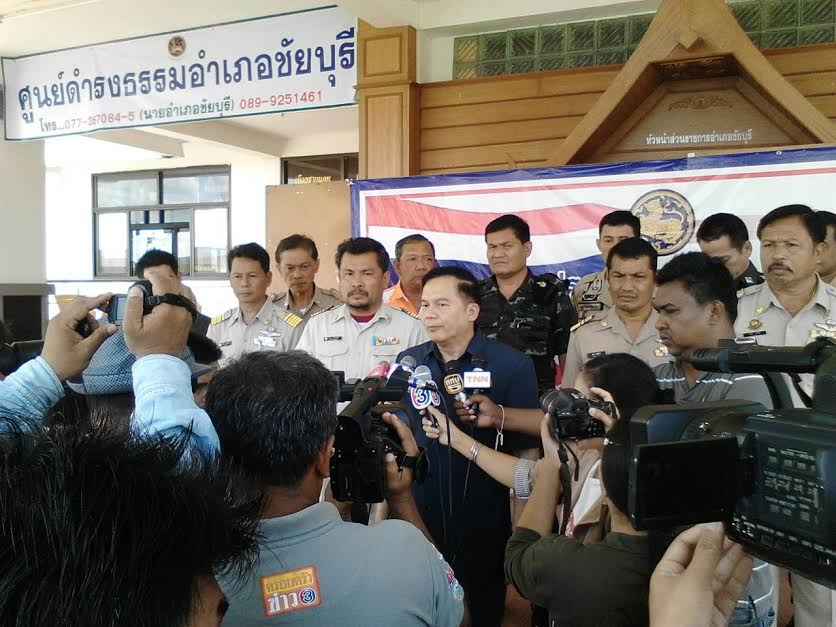 The Klong Sai Pattana community covers a land area of 906 rai (362 acres) in Sai Thong sub-district, Chaiburi district, Surat Thani province. All of the villagers are members of the Southern Peasants’ Federation of Thailand (SPFT), which was established to coordinate between the state and local communities in order to implement agricultural land reform based on the community land entitlement and the establishment of the Land Management Fund. The land inhabited by members of the Klong Sai Pattana community has been a focus of contention between villagers and agribusiness capitalists for an extended period of time, but the right of the villagers to inhabit the area has been repeatedly confirmed.

For over thirty years, the area of the community has been illegally occupied by oil palm plantations who have challenged the right of the villagers to remain in the area. The villagers’ right to remain has been granted and affirmed by the Agricultural Land Reform Office (ALRO), who acted on the authority of a resolution made during a meeting of the Committee to Solve the Problems of the Land Reform Network of Thailand in the Parliament in 2009. The ALRO filed a case against the Jew Kung Juy Development Company, which owns the plantations to evict them from the land. The ALRO was successful in both the Court of First Instance and the Appeal Court and the Jew Kung Juy Development Company is now appealing the case with the Supreme Court. Concomitant with the legal struggles, since 2009, extrajudicial violence has been used in an attempt to evict the villagers from the area. Three community leaders and human rights defenders have been assassinated in Klong Sai Pattana community.

Since mid-August 2014, the intimidation and violence against members of the Klong Sai Pattana community has again intensified. On 16 August 2014, two local ‘mafia’ brought fifty soldiers to conduct searches of eight houses in the community. They did not have warrants for the searches. Then, on 24 September 2014, two policemen, one military intelligence officers, two local ‘mafia and three unidentified men came to the community in a Toyota Fortuner SUV and a white Isuzu pickup truck. The villagers were told that they had to leave their homes and land within seven days, and they are concerned that the reason is that there will be an attempt to illegally sell the land to a third party.

Following this incident, four representatives from the SPFT contacted the National Human Rights Commission, who sent a letter to the governor of Surat Thani. On 1 October 2014, they learned that he had not yet received the letter. On the same day, the SPFT also went to meet with representatives of the military at the Vibhavadi Rangsit Army Camp in the province.

When they met with Colonel Sombat, deputy commander of the Internal Security Operations Command (ISOC) for the province, they asked why a public notice had not been posted in their community informing them of eviction, as has been done in other communities where the authorities are planning to carry out evictions. Colonel Sombat informed them that under martial law, an eviction can be carried out without prior warning. He insisted that the community needed to procure an official letter from the ALRO stating that they were authorized to live on their land; this is the case even though their occupation of the land has been legal since 2009. The ALRO has already put a large signboard in front of the community stating that the land belongs to the ALRO. Rather than harassing the members of the community and threatening them with eviction, the military should contact the ALRO directly.

He further informed them that the ISOC planned to go to every village in which the SPFT has members, which includes seven communities, to collect information on each member of the SPFT. The four SPFT representatives at the meeting were forced to provide their citizen ID cards to the soldiers and their details were recorded. Sergeant Somsak, a soldier who was present at the meeting who also went to the Klong Sai Pattana community on 24 September in the incident noted above at one of the women human rights defenders from the SPFT and told Colonel Sombat that she had made a video and released it to the press.

Following the meeting, Sergeant Somsak, along with former district and village heads  and a former police officer believed to have links with the company went to visit Numdaeng village, which is close to Klong Sai Pattana community.  They did not take any action but the villagers were frightened by their presence.

At 9 am on 2 October, the SPFT members had a meeting at the Chaiburi district office to negotiate with the Surat Thani governor. At 11 am, a landbroker and local influential figure, drove around the Klong Sai Pattana community and there are reports that the Army and the media will go to the community later today. Following the weeks of harassment, intimidation, and surveillance by the authorities, the SPFT is gravely concerned about the safety of their members in and beyond Klong Sai Pattana community.

At present, the villagers face a constant threat of violence and forced eviction from land for which they have a legal right to occupy. They are under threat from a combination of state security forces and private capital. Similar to other instances of threatened eviction since the 22 May 2014 coup, this is an example in which the coup has created a gap in which the rights of ordinary citizens are violated in the service of protecting the interests of influential elites.