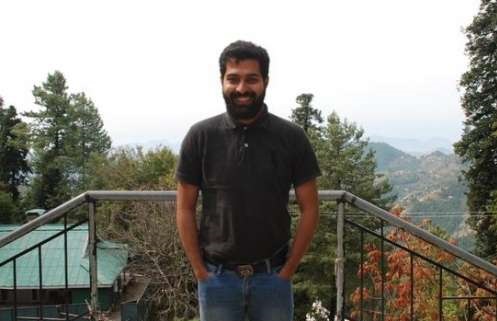 Pakistan’s law enforcement agencies have extended their tentacles to a web blogger who found cyberspace the only avenue available to him to expose the underbelly of corruption in the country. On October 28, a 19 year old blogger and political worker of Pakistan Tehreek Insaaf (PTI) was arrested by the Federal Investigation Agency (FIA) allegedly for criticizing a sitting judge of a Peshawar High Court. Following his arrest, there has been an uproar on Twitter and hashtag #JusticeForQazi is trending.

Qazi Jalal has been arrested for his tweets against the judiciary, and the FIA confirmed on Wednesday that Qazi was arrested under the Pakistan Electronic Transaction Ordinance 2002, and is in FIA custody. Media reports have also stated that action against teenager Qazi Jalal has been taken on a complaint registered by unknown Pakistani citizens and he was arrested on charges of creating negative propaganda against the judiciary. Jalal has reportedly been criticizing decisions of the judiciary for a long time via his twitter account@JalalQazi.

Jalal, a blogger and presenter at Insaf Radio was said by the FIA to be posting on Twitter profile “slanderous and defamatory tweets against the justice Irshad Qaiser”. On 22 September 2015 Qazi Jalal tweeted a reference to an engagement card of Mr Faizan Malik – the future son-in-law of Honorable Justice Irshad Qaiser. Faizan Malik is a lecturer at Abdul Wali Khan University who has been under investigation for his illegal appointment. 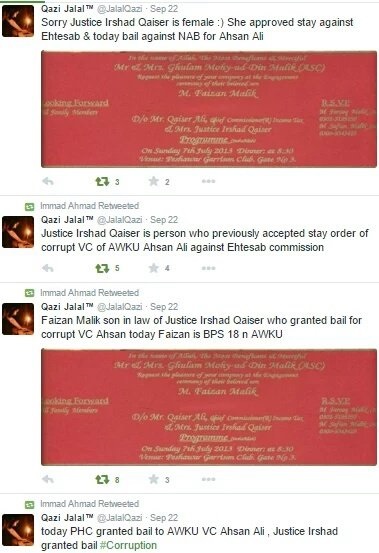 The vice chancellor of the university where Faizan was serving as a lecturer, Ihsan Ali, was arrested onSeptember 15 by the Ehtesab Commission and sent to a 14-day remand to the Peshawar Central Jail for involvement in corruption to the tune of Rs 550 Million.Seven days later, on September 22, Ihsan Ali was granted bail by Justice Irshad Qaiser. Qazi Jalal contended that granting of bail by Justice Qaiser is a conflict of interest, and that she should not have heard the case.

The FIA has charged him for violating the Electronic Transaction Ordinance of 2002, specifically clauses 36 and 37. Offences under these sections are triable by Court of Sessions, are non-bailable, compoundable and cognizable.

—  (2) Any person who does or attempts to do any act with intent to impair the operation of, or prevent or hinder access to, any information contained in any information system, knowingly that he is not authorized to do any of the foregoing, shall be guilty of an offence under this Ordinance.

— (3) The offences under sub-section (1) and (2) of this section will be punishable with either description of a term not exceeding seven years or fine which may extend to one million rupees, or with both.

Legally speaking, Qazi cannot be tried under the above sections for retweeting/posting an invitation card. Since when has sharing an invitation card become a triable offence or violation of privacy of information? At most, Qazi can be charged with contempt of court. The trend of curbing free speech within Pakistan has reached an alarming level, and no one is deemed safe anymore. In particular, investigative journalists who expose corruption at the highest echelons of Pakistani society are more prone to the selective application of laws curbing free speech under the guise of penalizing cyber crime.

The Prevention of Electronic Crime Act (PECA), which has been sent to the parliament for approval and which has been severely criticized by civil rights activists, can prove to be the last nail in the coffin for freedom of expression in Pakistan. Such draconian laws make it impossible for citizens to express their views without fear of repercussion or backlash from law enforcement agencies. What is even more alarming is that the country’s judiciary, the bastion of equality and protector of fundamental rights, is becoming a party to the injustice.