The Asian Human Rights Commission (AHRC) calls for the release of all detained student protesters from prison, who have been charged with multiple sections. Student protesters awaiting trial have spent more than six months in prison, prosecuted under sections 143, 145, 147, 332 and 505(b) of the Myanmar Penal Code, allegedly over unlawful assembly and alarming the public. These students were demanding an amendment to the education law enacted last year and faced a brutal crackdown by the police on 10 March 2015. Initially 127 student protesters and their supporters were arrested after the crackdown. They were held in Tharawaddy prison for more than 24 hours without any legal assistance. Some were released without charge a few days later, some were granted bail, but most have been detained in prison. 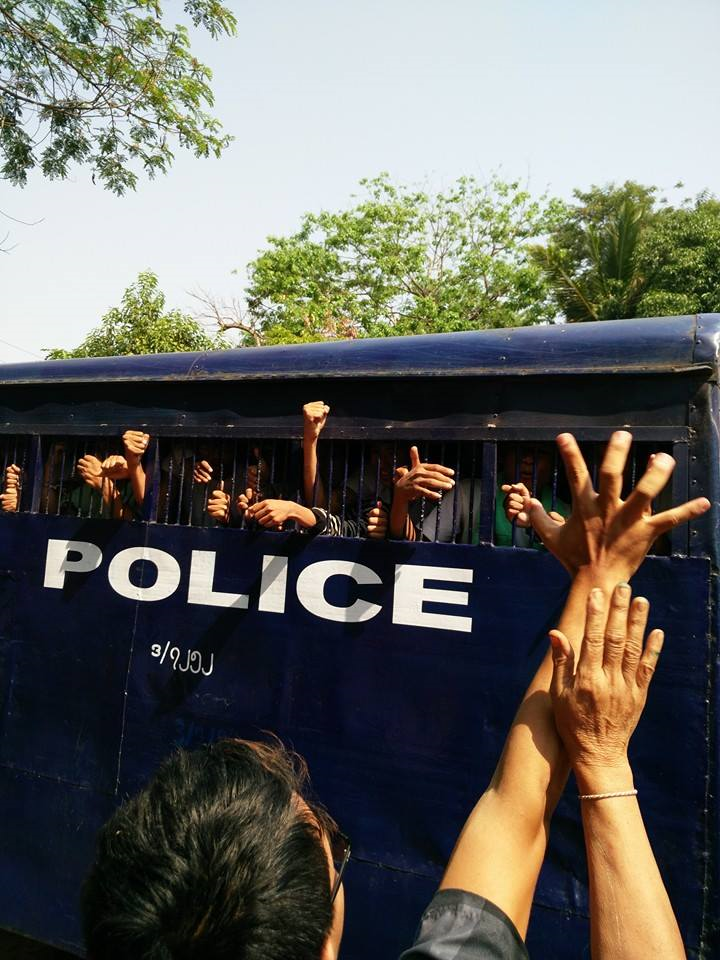 On 30 June 2015, the Confederation of University Student Unions (CUSU) peacefully protested in Yangon, calling for amending the current Constitution and demanding that 25 percent of unelected military personnel leave the parliament. Five student protest leaders had cases filed against them under article 18 of the Peaceful Assembly and Procession Act. Among them, Paing Ye Thu, Zayar Lwin and Nan Lin were charged under section 505(b) of the Penal Code. Paing Ye Thu and Zayar Lwin were arrested on 2 and 7 July 2015 respectively, while Nan Lin remains at large.
In addition, Zayar Lwin’s lawyer requested bail for him on 7 September 2015 to sit for an exam held during the third and last week of the month. The judge said if the Ministry of Education allows him to sit for the exam, the court will grant bail. On September 14 however, the administrative department of the Yangon Institute of Economics responded that they would not allow him to sit the exam.

Moreover, four members of the All Burma Federation of Student Unions (ABFSU) studying at Mandalay Yadanarbon University were arrested on 1 July 2015 for allegedly spray painting, “We don’t want the National Education Law” and “Release students in Tharyarwaddy prison immediately”, on the front wall of the university. The students Naing Ye Wai, Aung San Oo, Jit Tu and Nyan Lin Htet, face charges under sections 143, 147 and 505 (b) of the Penal Code and Section 18 of the Peaceful Assembly and Peaceful Procession Law. The four students requested bail on August 12 to sit an exam, but it was rejected on August 21.
One of the student defense lawyers, Khin Khin Kyaw, has been sued under Section 228 of the Penal Code over allegedly obstructing the public servant on the 1 September regular court hearing.

Article 18 of the Peaceful Assembly and Peaceful Procession Law and Section 505 (b) of the Penal Code are commonly used for activists exercising their rights to freedom of expression, assembly and association. Their rights have been denied and their lawyers are targeted for their political actions. According to Assistance Association for Political Prisoners and the Former Political Prisoners Society, there are 95 political prisoners with an additional 465 people awaiting trial for political actions.
If the country claims to be democratizing, there should not be such a large number of political prisoners in prisons. The AHRC therefore calls on the Burmese government to release all student protesters immediately and unconditionally, and drop all charges against them. The AHRC also calls on the international community to pressure the government over its oppression of freedom of expression, assembly and association.

« PAKISTAN: teenage victim of torture committed suicide after being distraught by the judiciary