PAKISTAN: 18 days pass, no hope of justice in sight for the 10 year boy 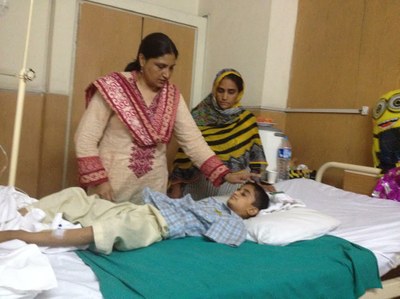 Eighteen days have passed since the tragic incident where the arms of a 10-year-old boy were severed from his body by a landlord and to-date, no positive developments have been taken nor has there been any progress in the case against the perpetrators of this horrific crime.  According to reports, doctors are being tight-lipped to reveal the actual medical prognosis of the child to his parents, i.e., if artificial limbs can be fitted.  Further, although the government has promised to provide compensation to the boy and his family, no such compensation has been received. According to reports, police have detained the perpetrator landlord, who is enjoying all the privileges that entails with being in the good books of the police force and vice versa. He is being held at the police premises with all modern comforts of life instead of being locked up in the remand prison. The Chief Minister’s announcement to make arrangements to send the boy to a hospital anywhere in the world to receive due medical care has also been conveniently forgotten. In its stead, government officials are conveniently avoiding even discussing the issue. To make matters worse, the Supreme Court which is infamous for taking action on its own motion, ( suo motu cases ) – even in cases of least importance such as  to recover a bottle of alcohol from an actress , on a sudden hike in the price of short cakes etc.,-   are in this instance of gravest public interest,  maintaining a deafening silence and no action suo motu or otherwise action is even forthcoming. Perhaps, the Supreme Court is of the view that a life of a child who has lost both limbs to a sheer act of thugery warrants no public interest.

The reason for this mass inaction is simply that the victim’s family is poor and are unable to purchase justice and security. In contrast, the perpetrator has the power to purchase justice, security and thereby maintain impunity. This impunity is maintained throughout Pakistan by the rich and affluent, landlords, land owners, and alike due to the absence of a functional public justice delivery system and the non-existence of rule of law in the country added to which there is a judiciary which is unable to deliver justice in such a state of collapse of the public justice delivery mechanisms.

According to reports received from medical officials at the Jinnah Hospital in Lahore, despite being provided with best available medical care, as claimed by the hospital authorities, the young boy’s health has considerably deteriorated, he has lost weight and is looking paler each day. He is continuously suffering from fever and cold and hospital authorities have termed these symptoms as common.

Even after 18 days of the incident a Committee set up under the Deputy Inspector General of Police (DIG) of Lahore has not yet received any conclusive results. Although the incident is a clear and a deliberate act of bodily harm to a minor, in tying the hands of the boy and running both his hands through a wheat thrashing machine – the inquiry and investigations have not yet been concluded. It is reported that the officers investigating this incident have on many occasions visited the child and his family members in hospital in futile attempts to try and force a withdrawal of the case by the victim’s family. It is reported that high ranking police officers from Gujrat District have also visited the boy and his family as well as members of the special investigations committee.

The authenticity of the police investigations committee too is in doubt as the police have also been responsible for aggravating the situation by failing to file a First Information Report until three days has passed. The police were eventually forced to file the FIR, after the incident had been widely publicized throughout local and international media.  Hence a police investigations unit has been appointed to investigate among other things, their own actions in neglecting to file the FIR and to assist the victim.

The only progress in the investigations so far, has been to transfer the victim to the Jinnah Hospital in Lahore which is a better equipped hospital. However there has been no improvement in his medical condition. The boy’s wounds where his arms were severed have not yet healed. Doctors say that they cannot confirm whether artificial limbs can be reattached to his limbs which would give the child a future – which for him and his family is a bleak proposition. That is the nature of justice, which is being promised by the government and its failed public justice system.

The failure of law enforcement and the justice system in Pakistan to treat this case with the care and professionalism that it deserves is a tragic example of how the lives of vulnerable Pakistanis are too often wasted and destroyed. It demonstrates to the world, that in Pakistan, if you cannot afford to pay for justice, you are made a victim to this state of lawlessness. No compensation can justify the child’s loss nor the pain and suffering inflicted on his family. The failure to pursue justice adds to the resolve of other potential ‘landlords”, those with political patronage and criminals that they too can  avoid punishment for any wrongful act, criminal or otherwise.

Finally, the callousness with which  the violence was perpetrated on this young child which  has robbed him  of his limbs, has also robbed him, his family, and all people of Pakistan  of any opportunities his future may have held and replaced it with the weight of another victim. The Pakistani government must act immediately to protect the vulnerable, help rehabilitate victims, provide them compensation and hold perpetrators accountable – deliver public justice – before the entire nation is crushed by the despair, hopelessness and helplessness that arise from such violence.