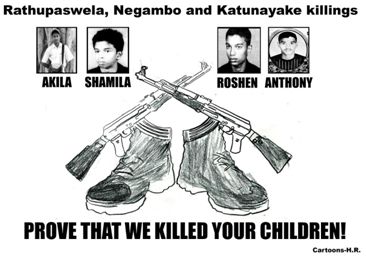 The killings at Rathupaswela, Weliweriya have brought into sharp focus the crisis of the rule of law in Sri Lanka. The burden of proving the allegation of being killed or otherwise seriously injured by the actions of the military has now been shifted to the people. Meanwhile the people live in fear of reprisals due to being witnesses to these assaults by the military.

When the allegation is that the offenders are state agents then there is a greater burden on the state to have the allegations properly investigated and to bring the culprits before the courts as soon as possible. Regarding this basic obligation Sri Lanka seems to be the exception. The people themselves are left to prove the crimes committed by the state agents and at the same time they are being harassed and intimidated.

When the allegation is that the state agents engaged in killings and other crimes the state has its own agencies to investigate these matters. The methodologies of such investigations are well prescribed in both the military and police manuals.

It is one of the expectations from those who are state agents that they will reveal to their superiors whatever took place. If even this is not possible the very nature of the relationship between the state and those who conducted the operation and those who participated in it comes into question.

If the state cannot ensure that degree of discipline then it is the government leadership that must hold itself responsible to ensure that the state agents carry out their obligations.

However, what the above cartoon shows is that everything has been turned on its head in Sri Lanka and the people who were victimised are also being pushed to be their own investigators and the prosecutors of their cause.

« SOUTH KOREA: The authorities’ conducts to take DNA samples from those Yongsan displaced persons and SSangyong workers and to establish and use a database containing said samples are constituted the serious violation of the constitutionally protected human