Home / News / PAKISTAN: The last nail in the coffin of democracy

PAKISTAN: The last nail in the coffin of democracy 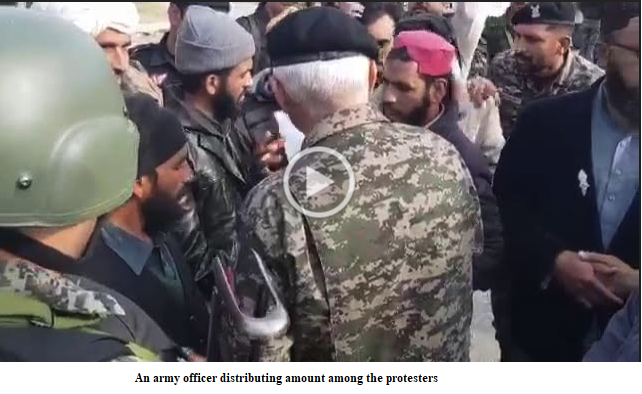 The year 2017 in Pakistan has been marked by tussles between state institutions and the army. The chain of events that started with a seemingly whimsical news item about the war of words between the military and civilian top brass, known as the Dawn Leaks, culminated into a sit-in the capital city of Islamabad that lasted for more than 21 days in November, and ended with bloodshed and a surrender document duly signed by the civilian government under the bayonet of army.

The sit-in was called by religious cleric Khadim Hussain Rizvi, Chief of the hitherto unknown Labbaik Ya Rasool Allah (LYRA), a militant and political organisation that purports itself to be peaceful. The sit-in was a reaction to the alleged amendments in the Election Bill 2017, which changed the wording of the declaration required of elected parliamentarians proclaiming the finality of the prophet hood. The government soon reverted back to the original text, but the damage was done.

The clerics called a sit-in the heart of Pakistan’s capital city, and kept the twin cities of Islamabad and Rawalpindi virtually inaccessible for 21 plus days, causing severe troubles for daily commuters. The situation was a Lahore Model Town de ja vu of 2012, with the care taker government of Prime Minister Shahid Khaqan Abbasi unable to take any action against the violent protestors.

Finally, after being served several ultimatums, the government was forced to take action against the protestors on November 25. What ensued is a textbook example of the utter break down of state apparatus and police incompetence. The police forces were beaten up by the protestors, with many officers receiving severe injuries (footage of the attack on the police can be viewed here). In total 173 were injured by the fundamentalists including 54 police officials and among them 32 police officials are seriously injured. According to the electronic media, seven persons including one child were killed, whereas other sources claim that around 45 persons were killed.

The freedom of expression was the first casualty of the pandemonium, with TV channels ordered to go off air by the Pakistan Electronic Media Regulatory Authority. For 42 hours, the channels remained off air, unprecedented in the country. Meanwhile, journalists, cameramen and photojournalists covering the protest were brutally beaten by the protestors (watch the footage here).

The army was then called on to take control of the situation, in aid of the civilian government, under Article 256 of the Constitution of Pakistan. In contravention to the clear orders however, the military chief refused to intervene and “suggested” that the government find a peaceful solution to the chaos. Given the circumstances and the refusal to act despite orders from the Premier of the state, it must be questioned why Article 6 of the Constitution was not applied against the General? 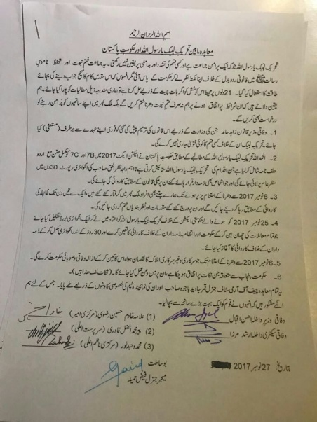 Abandoned by the army, the government was forced to meet the demands of Rizvi and his band of hooligans. The agreement, hailed as a suicide note by analysts, includes preposterous demands, such as ease of filing an FIR for blasphemy cases and having three representatives of LYRA in the Punjab textbook board to review the curriculum. Other salient features of the agreement were that a board of clerics led by Pir Muhammad Afzal Qadri will be set up to probe remarks made by Punjab Law Minister Rana Sanaullah against the persecution of Ahmadis, and Sanaullah will have to accept the decision made by the board. Also, no leniency will be given to those convicted by courts for blasphemy, and no ban will be imposed on the use of loudspeakers.

Furthermore, the agreement notes that two representatives of Tehreek-i-Labaik (LYRA) will be included in the panel assigned to decide changes in textbooks. The officials will push for inclusion of translation of the Holy Quran, and chapters about Seerat-un-Nabi (PBUH) and Muslim leaders. Every year, November 25 will be observed as “Martyrs of Prophet’s honour” day.

The agreement clearly reveals the influence of the extremist clergy in Pakistan’s state affairs. The preposterous demands were accepted by the state to the letter, and the surrender document was duly signed by Interior Minister Mr. Ahsan Iqbal and cleric Khaidim Hussain Rizvi. Ironically, the guarantor of the agreement was the army itself. Moreover, in a TV interview, Khadim Hussan Rizvi admitted that he dealt only with the military leadership and the ISI, and it “must have been” the army leadership which got the Interior Minister to sign the agreement. A video of the director general Rangers disbursing money amongst protestors after the sit-in ended caused many to question whether this was a soft coup or a conspiracy to over throw the elected civilian government. However, shamelessly the army general was making the selfies with the protestors and assuring them that army stands with you.

By ceding to the demands of the violent demonstrators, the state has virtually given absolute power and blanket immunity to fundamentalism and militancy in the name of religion in the country. The government has set a shameful legacy for itself, wherein some 1500 people managed to overcome the government and a country of 200 million people, a 600,000 strong army and the world’s sixth nuclear state. The whole world saw the drama unfold that leased the people of Pakistan to non-state actors, who will now decide who is ‘Muslim enough’ to live in the country.

This agreement is the last nail in the coffin of Pakistan’s democracy. The Army is using pressure tactics to create a political vacuum, thus paving the way for a new military rule.
The army is creating a monstrosity of great proportion, which will not be brought down easily and can turn hostile against its masters, as witnessed earlier with the Taliban. When will the military policy makers learn their lesson?

The Asian Human Rights Commission foresees a rule of fundamentalism in the country if the government does not strengthen its resolve to root out militancy. If this agreement is enforced, the government will have to seek validity of its every action from Islamic militants. Policy makers must work on a state narrative to counter religious extremism and propagate the true teaching of religion, which has been distorted by fanatics.

« INDONESIA: Critics Using Meme Against Public Authority is Part of Freedom of Expression