The AHRC releases a dossier on all relevant documents relating to the campaign to obtain release for Rizana Nafeek. 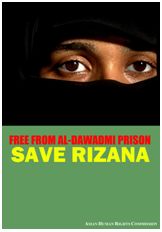 Rizana Nafeek, arrested in 2005 and sentenced to death by beheading in 2007 is still languishing in the Dawadami Prison in Saudi Arabia as the government of Sri Lanka has failed to take the necessary diplomatic steps to obtain her release despite of their promises to do so.

As pointed out by the Asian Human Rights Commission the allegations against Rizana, who was 17 at the time of the alleged incident was baseless. She was charged with the murder of an infant under her care while by all circumstances it is clear that she had no involvement of any sort regarding this death and that in all probability the child died of natural causes. No foul play of any sort by her was alleged, even at the courts and there was no post mortem report giving the cause of death. Purely on the basis of a confession obtained under severe duress by police officers who spoke only in Arabic, a language she had no understanding of and without the benefit of a translator.

The sole basis for her conviction and the later affirmation of the conviction during appeal was that under Saudi Arabian laws a confession has finality and there is no room to challenge such confession during the trial.

There was an international outcry against the sentence and concern for her has been expressed by way of massive interventions on her behalf requesting her pardon from His Royal Highness, the King of Saudi Arabia.

His Excellency the President of Sri Lanka, Mahinda Rajapaksa also wrote a letter to His Royal Highness requesting a pardon. In Sri Lanka the government spokesmen have repeatedly claimed that missions have been sent and negotiations conducted with the family of the deceased child to obtain a pardon. However, in close examination of reports available in the media it becomes clear that the Sri Lankan government has failed to established contact with the family and therefore there are no effective negotiations going on at all.

This means that the order for her execution could be carried out at any time.

Among those who have expressed concern for this case is the European Parliament where the EU High Representative and Vice President, Catherine Ashton has said that, “The EU will continue to follow it (Rizana’s case) very attentively in close coordination with the authorities in her home country, Sri Lanka (May 10, 2012).”

The Asian Human Rights Commission is today issuing a dossier on all documents relating to the case of Rizana Nafeek and call upon everyone to make a renewed attempt to get her release by intervening with His Royal Highness the King of Saudi Arabia and also pressuring the Sri Lankan government to undertake effective diplomatic efforts to obtain her release.

« INDIA: Lesson on lawlessness: of child trafficking, and a father’s lonely, long-drawn struggle against criminal cops and authoritative apathy

SRI LANKA: Interview with editor who was threatened by defence minister  »