The Asian Human Rights Commission (AHRC) is alarmed at the Nepali police’s firing in broad daylight, with an intent to kill, at protesters who were protesting at the lack of investigation in the death of an 11-year-old child. Laxman Shiwakoti was found dead in a pool of floodwater on 1 October 2017 after he went to his neighbor Suresh Pokharel’s house on September 30. Laxman’s family has filed a complaint with the police, citing the hand of the Pokharel family in his death. 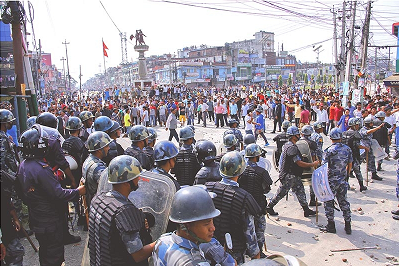 Due to police indifference in apprehending Laxman’s murderers nearly a month later, on October 27, family members and supporters organized a protest rally. The protesters accused Deputy Superintendent of Police Raj Kumar Silwal of not properly addressing the concerns of the victim’s family and villagers, and of being in collusion with the family of those suspected of the murder.

Soon after the locals began protesting, police resorted to indiscriminate baton charges. The agitators then started pelting stones to protest police excess. The police fired hundreds of rounds of rubber bullets and lobbed more than eighty rounds of tear gas shells. The police also fired on protesters without providing clear warning. In a clear infringement of the international practice of crowd control and use of firearms, protesters Naresh Thapa (31) and Dev Bahadur Chaudhary were shot dead with bullet injuries above their waists. Two other protesters are in serious condition, and dozens more have received bullet injuries and are receiving treatment at the Birtamod based B & C Hospital and Mechi Zonal Hospital. Mani Nepali of Danawari, Ilam, was critically injured and has been referred to the Dharan based BP Koirala Institute of Health Sciences after his treatment was not possible at the B & C Hospital.

In order to control the situation, the District Administration Office (DAO) Jhapa placed a curfew on the area after 1:30 pm on Friday, without adequately informing the public. Only after the police fired shots, did they mention that protesters violated the curfew. The police entered houses and beat innocent people.

Available YouTube videos clearly show that the police used excessive force while controlling the crowd. The police did not use any standard crowd control mechanism like handheld sprays or water cannon. It can be clearly seen that the police were the ones fueling the crowd to become more aggressive and unruly. The police can be also seen pelting stones back at the protesters.

While the curfew has now been lifted, people in Jhapa district are living in fear. Demands of investigation of a mysterious death resulted in police shooting and killing more people. The AHRC condemns the excessive use of police force, which was unnecessary and unjustifiable. An immediate investigation into the incident must occur, as well as into the police manhandling of human rights activists and journalists. All those found guilty must be prosecuted and punished. Furthermore, the police must also effectively investigate the death of 11-year-old Laxman and arrest those responsible.

« SRI LANKA: Police neglect leads to the death of a young man