Home / News / PAKISTAN: Capital punishment still an excuse as deterrent against terrorism and other crimes

PAKISTAN: Capital punishment still an excuse as deterrent against terrorism and other crimes

On 10 October 2017, the 15th World Day Against the Death Penalty aims at raising awareness about the reasons why people living in poverty are at a greater risk of being sentenced to death and executed. 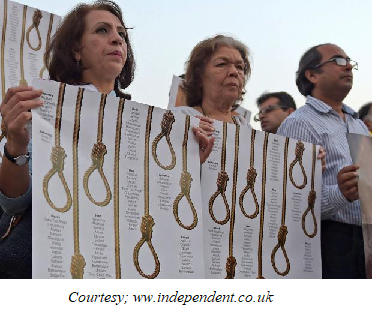 Pakistan is one of the states in Asia that continues to carryout capital punishment. It is also a country with a highly problematic criminal justice framework notorious for miscarriage of justice and deep corruption. The civilian as well as the military courts in Pakistan sentence persons for capital punishment, often without following any form of due process. The Pakistani state promotes capital punishment since it firmly believes that this form of punishment will deter terrorism and other serious crimes.

Pakistan had once implemented a moratorium on capital punishment. This was lifted in December 2014. Since then, that is between 27 December 2014 to date, 482 persons have been executed in Pakistan under capital punishment. The moratorium was lifted after the terrorist attack at the Army Public School in Peshawar on December 16, 2014, in which armed militants killed 141 persons including 132 students. Instead of investigating the incident, the civilian government came under pressure from the Pakistan military to lift the moratorium on capital punishment. On its own, the military got established special military courts to try persons accused of terrorist activities.

Pakistan is believed to have the largest number of death row inmates in the world. According to the government, in October 2015, 6016 prisoners were awaiting execution of their sentence. Other estimates are however higher placing this number above 8000. What is shocking further is that about 1000 of these death row convicts are minors.

Carrying out capital punishment upon juveniles is prohibited in international laws to which Pakistan is party to. Proper verification of age is extremely difficult in Pakistan, particularly of those from the poor communities where the practice of recording the date of birth does not exist. This renders the above numbers as mere estimates.

The root causes of indoctrination of people into terror syndicates are omnipresent in Pakistan. This includes poverty, unemployment, illiteracy, and increasing radicalization. The government of Pakistan however is not interested in addressing any of these issues. It believes that extreme forms of punishment can address terrorism in Pakistan. It is a deeply flawed notion.

The current state of Pakistan’s criminal justice framework is such that it is misused mostly against the underprivileged, marginalized and therefore vulnerable communities. The unfortunate case of Mr. Khizar Hayat, a person whose psychological state deteriorated during his 17 years waiting period as a death row convict in Pakistan is an example. Due to relentless civil society efforts, the execution of Khizar’s death warrant has been delayed to allow for a proper medical evaluation. But the government of Pakistan remains determined to carryout the sentence.

A paraplegic, 43-year-old Mr. Abdul Basit, also is facing the gallows. A wheelchair bound prisoner at Lahore Jail, Basit was convicted and sentenced to death for murder in 2009. In 2010, he contracted tubercular meningitis in prison. The prison authorities did not provide him sufficient health care, that paralysed him, waist down. Despite a government-appointed medical board having confirmed the continuing severity of his condition, in September 2017, a “black warrant” has been issued for his execution.

Khizar and Abdul Basit’s death warrants are in violation of the UN Convention on the Rights of Persons with Disabilities, which Pakistan has ratified in 2011. But, the administration in Pakistan is in no mode to oblige.

There are absolutely no guarantees in practice to fair trial and due process in Pakistan, as prescribed in Article 10-A of the Constitution of Pakistan, and Articles 9, 14 and 15 of the International Covenant on Civil and Political Rights. This means that those who are sentenced for capital punishment faces the enormous risk of losing their life as the direct result of a failed criminal justice framework.

The Asian Human Rights Commission therefore urges the government of Pakistan to:

Release from custody all prisoners who have already completed more than 10 years in the death row;

Respect the right to life of every citizen and ensure that due process is followed in every legal proceedings;

The state of Pakistan re-engineers and overhauls its archaic criminal justice framework ushering in a humane and independent justice system that depends of modern science to undertake crime investigation.