PAKISTAN: No place for slum dwellers

In urban planning, slums are thought of as a tumor; an alien growth that can risk the overall development of an urban mega project. The notion ignores the fact that the labor force needed to materialize the urban dream often comes from this underbelly, which provides shelter to lives lived in the shadow of ostentation. Militancy, terrorism, natural calamity, and operation against militants, are driving mass migration to the cities of Pakistan at an unprecedented rate.

According to UN Habitat report, in 2000, nearly 50 percent of Pakistan’s most populated city, Karachi, lived in slums. Around 40 million of Pakistan’s urban population lives in katchi abadis, where they are deprived basic facilities like water, sewerage and electricity.

Islamabad, the capital, has witnessed mass migration from other provinces, particularly from Khyber Pakhtunkhuwa (KPK), following operation Zarb-e-Azab that intends to root out militants. Those evicted so have turned to urban centers for job opportunities and better educational facilities for their children. 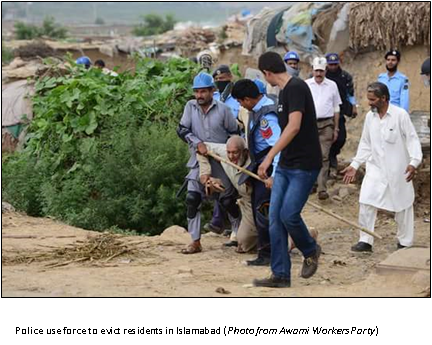 The settlement of Internally Displaced Persons (IDP) in Sector I-11 in Islamabad is the largest such informal settlement, housing more than 20,000 people. These settlements are developed on encroached lands, many having been encroached upon for two to three decades.

On June 26, the Capital Development Authority (CDA), the development authority for the City of Islamabad, submitted a four-phase plan to the Islamabad High Court (IHC), for the removal of illegal slums. The IHC directed the CDA to remove slums from Sector I-11, as it was argued that a new sector could not be developed due to the presence of illegal settlers for over three decades. The CDA plan has not explained where the thousands of displaced slum residents are expected to go when their homes are demolished.

On July 30, the CDA enforcement wing and hundreds of police and Rangers personnel entered and demolished around 150 shacks and mud houses of this settlement. The police used brute forces against the residents, dragging the women and those enfeebled, to forcefully evict the settlers and clear the land for development. There have been unconfirmed reports of the deaths of an 8 year old and a 6 months old baby in the eviction drive. #Stopeviction is currently trending in social media in Pakistan, as a result, with many terming the action as state brutality against a hapless population, calling for immediate cessation of the forceful eviction.

The city administration initially offered the slum dwellers the option to voluntarily vacating around 230 plots that were allotted to individuals about 25 years ago. Slum dwellers claimed that they were not given enough time to remove their valuables from their houses. Policemen in riot gear fired tear gas in response to stone pelting by the slum dwellers.

In 1985, the government allowed nearly 400 Afghan refugees to settle in Islamabad. With the passage of time, the slum grew, mostly through internally displaced persons from KPK and internal migrants from Punjab. The authorities insist that those evicted are illegal Afghan immigrants, though most of the slum population hold Pakistani National IDs and are, in fact, internally displaced persons from tribal belts of FATA and Waziristan.

In Pakistan, there is an inherent elite bias in national housing development; more and more colonies for the rich are being built in the big cities. Some think that the government should resume the old policy of regularizing the slums. They cite the example of the Sindh Kachi Abadi (slums) Development Authority in the Sindh Province. The urban planners blame inefficient supply of housing for low- income people for the rapid proliferation of slums in Pakistan’s big cities. Instead of admitting its failure in providing shelter to the poor, the government has declared slum dwellers as illegal encroachers and branded them criminals. The eviction is a reminder of the failure of the government of Pakistan to make room in the cities for millions of rural migrants escaping earthquakes, floods, wars, or just plain misery back home. 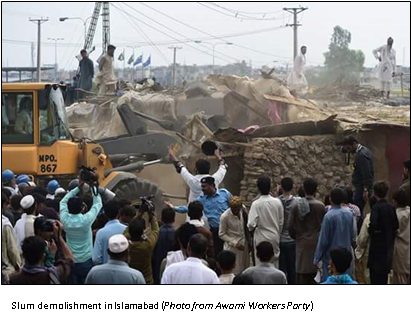 It is the responsibility of the State under Article 38(D) of the Constitution of Pakistan to provide housing to the poor. The Article mandates that for the “promotion of social and economic well-being of the people” the State shall: “provide basic necessities of life, such as food, clothing, housing, education and medical relief, for all such citizens, irrespective of sex, caste, creed or race, as are permanently or temporarily unable to earn their livelihood on account of infirmity, sickness or unemployment”.

It is no secret that the Lal Masjid, which has become a hub for militants in Islamabad City, is also built on encroached land. However, no State action has ever been made to evict the encroachers as the powerful and well-placed head of the mosque can take law and order in his hands, as witnessed in the Lal Masjid operation in 2007, which caused the death of hundreds of innocent students of the religious seminary associated with the mosque. The land encroached upon by the Military to establish elite housing societies is also neglected by the Authority, as the most powerful institution of Pakistan is given free reign to take whatever it fancies. According to All Pakistan Alliance for Kachi Abadis and AWP, a Rs. 20 Billion allocation for a housing scheme for the poor in the budget is a sham. With 40 million people living in slums, the Budget allocates merely Rs. 500 per slum dweller.

According to the Quarterly report of the State Bank of Pakistan, the country is facing shortage of over 9 million housing units; the formal financial sector caters to only around 2 percent of all housing transactions, the lowest ratio in region. Because of population growth, Pakistan must build an extra 0.9 million houses every year to meet the demand. However, private and public sector developers construct only 0.3 million houses a year. Urban planners blame this policy for having encouraged the rapid growth of slums in Pakistani cities.

The slum rehabilitation model of India is better suited to make the eviction as humane as possible with meager resources. This includes setting up of temporary camps to accommodate the evicted until they found other options. By the 1970s the government of India gradually started adopting strategies that enabled the communities to help alleviate themselves. The model was used in the Orangi Town pilot project, i.e. in the world’s second largest slum.

Technically, only 10 years old, the Township in Karachi is home to 1.5 million people and still growing. Orangi, with 22 square miles of space, is significantly less dense than most urban slums and also more structured. There are 13 official neighbourhoods, each with its own council, and this has allowed the township to build its own sewer system. Additionally, as one of the 18 districts of Karachi, Orangi has government representation, albeit in the lowest tier of government. Over the last 14 years, the Sindh Slum Development Authority has regularized 626 squatter colonies in the Province, earning 550 million rupees (10 million dollars) from the dwellers.

Urban development experts say that a better way to address slums is to tackle the cause of their formation and growth by developing more medium size cities to act as alternative magnets for rural influx. The State needs to come out of its elitist mindset; it must provide affordable housing to its citizens. The slum dwellers, being equal citizens, have the same right to housing and dignity as the well to do class. The State must develop rural centers to discourage mass migration, while raising the standard of living in the slums.

PAKISTAN: Sabeen’s case-Confession of a jihadi perplexes more than it clarifies »