SRI LANKA : An addiction to torture 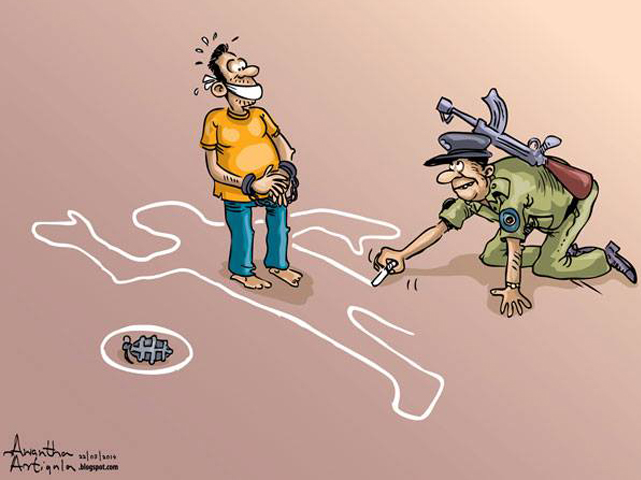 17-year-old Sandun Malinga died in police custody on May 9, 2014. He had been wrongfully arrested and beaten. His repeated entreaties for medical attention because of the chest pains he suffered after the beatings were ignored. After his arrest and initial beating, he had been brought before a magistrate. He and his lawyers told the magistrate that he was suffering chest pains. Instead of following protocol and asking for the boy to be examined, the magistrate ignored their pleas and ordered the boy to be detained. He died the next day, still in custody.

His torture and death are part of a pandemic of abuse by state agents. Impunity for the perpetrators is virtually guaranteed. Torture is used for all kinds of reasons, including as revenge for complaints about torture. High-ranking police officers and the judiciary are also compliant in the abuse; complaints to IGPs and ASPs are rarely responded to, and magistrates register even the flimsiest cases by the police.

The Sri Lankan government encourages torture despite public gestures at the international level claiming that it is opposed to torture. The Convention against Torture Act (No. 22 of 1994) is not implemented anymore and this is a policy decision. Another avenue open for torture victims in the past was the filing of fundamental rights applications. This, too, has been discouraged for policy reasons.

The Supreme Court follows a policy of encouraging lawyers to settle cases by negotiation. A torture victim, therefore, is pressed to negotiate with the perpetrator. As a result of this policy, the number of fundamental rights applications on torture has dropped drastically. Thus, by way of official policy, torture victims are deprived of any possibility of finding legal redress. There is also no witness protection law and victims have been assassinated for pursuing justice.

Common methods of torture used in Sri Lanka range from beatings, sometimes with the victim hung upside down, to the use of chili powder applied to the eyes and genitals. Another common method is the use of the ‘dharma chakra’, when the accused is tied up between two poles and beaten. Victims are also often humiliated, forced to strip naked or, upon asking for water, told to drink from the toilet.

Another common practice is, subsequent to severe torture, police officers force the victims to sign blank sheets of paper. These are later used when fabricated charges are laid against victims. The compliance of the magistracy in police abuse is often seen in these cases.

In some cases, collective punishment is exercised in response to complaints about torture. For example, in April this year a group of nine men were arrested and tortured by the Matale police in response to a protest in front of the office of the Superintendent of Police. The protestors were responding to the Superintendent’s attack on a man who had been legally collecting firewood on the estate for this late wife’s almsgiving. The nine men arrested and tortured included people who were not present at the protest.

It can be said that the Sri Lankan police are addicted to torture. The responsibility is not only with low-ranking officers who may be directly involved in torture but also with high-ranking officers like the OICs, ASPs and DIGs, who fail to exercise their command responsibility to prevent torture. There is a belief among policemen that without the use of torture they are unable to do their job. The truth is also that torture creates opportunities for corruption.

Complaints of torture are filed with the IGP and also with the Human Rights Commission, despite the fact that human rights organisations are aware that no real investigations or prosecution will take place. There are hundreds of presentations on Youtube where victims tell their experiences of torture in graphic detail. Besides this, there are other documentations, such as for example the book that was published last year by the Asian Human Rights Commission documenting 400 cases of torture experiences, taken from around 1,500 cases studied by the Commission. The United Nations agencies dealing with torture, including the Committee against Torture, have made so many recommendations to SRi Lanka to investigate torture complaints and to prosecute offenders but the government ignores such recommendations. Besides the police, the Sri Lankan military are also accused of very serious acts of torture, particularly relating to the operation of anti-terrorism law. None of these complaints are being investigated.

Often, there are reports about custodial killings. Some are cases in which victims die due to excessive beatings, such as for example the 17-year-old Sandun Malinga, who was beaten to death recently in police custody. There are other instances in which so called bad criminals are killed, allegedly because they tried to escape from police custody or tried to harm policemen. Of course, such stories are fabricated but there is no authority that is ready to examine the circumstances of these deaths in custody. Therefore, it is no exaggeration to say that Sri Lanka is a torture republic. The only inaccuracy may be about the word ‘republic’, given the constitutional changes which have virtually created an authoritarian system.

Torture is part of the day-to-day operation of the Sri Lankan state. The democratic, rule-of-law-based system that existed in Sri Lanka has been systematically undermined and its governing institutions have been no longer function in their assigned roles. Following the collapse of the rule of law and a functioning criminal justice system, an alternative system based on state violence has been entrenched in Sri Lanka. The impeachment of Chief Justice Shirani Bandaranayake was the death knell of the Sri Lankan judiciary, the end of a slow death from multiple blows, one of the strongest of which was the 1978 Constitution itself. Without a functioning judiciary, there is no recourse for the citizen in the defence of their rights. At the highest level, Chief Justice Mohan Peiris asks torture victims to settle their cases, and at the lowest level magistrates ignore complaints of torture and return victims to custody, and refuse to inquire into deaths in custody, accepting police claims about self-defence.

At the moment, there are no reasonable grounds on which to believe that torture will be brought to an end in Sri Lanka. All indications are that this problem will increase due to the impunity enjoyed by the perpetrators.

« INDONESIA/PHILIPPINES: Events in Hong Kong to mark the day for torture victims