Home / News / PAKISTAN: A call to recover the Turk teacher and his wife and daughters who have disappeared after arrest

PAKISTAN: A call to recover the Turk teacher and his wife and daughters who have disappeared after arrest

Despite being the host country of the highest number of refugees of the world, Pakistan is still not a signatory to the 1951 Refugee Convention or to its 1967 Protocol. The result is that the issues associated with hosting refugees are being addressed arbitrarily and inequitably. Social decency and hospitality demands that a country treats its foreign academia with respect for imparting education to its citizens. Sadly, this is not the case with Pakistan where Turk national teachers of Pak Turk School, Islamabad, were laid off and some of them forcibly returned to their country after a failed coup to remove Turkish President Mr. Recep Tayyip ErdoÄŸan. 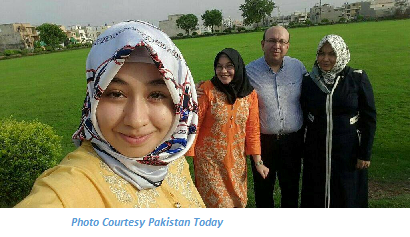 Unfortunately, not even those who have sought refuge with the UNCHR are spared. Recently a Turkmen Mr. Mesut Kacmez – the former principal of a Pak-Turk School – who was residing in Pakistan legally and peacefully, was taken away along with his family by unknown persons from his residence in WAPDA Town, Lahore, Punjab province, in the early hours of September 27.

Kacmez’s house was reportedly raided by about 20 persons in plainclothes along with five uniformed women police officials. They came in more than 10 vehicles having no registration plates. The persons forcibly took Kacmez, his wife and two daughters, and as per the eye witnesses the women were roughened up and tortured by the lady officers who dragged the women into an unmarked car and car sped away with the family.

Since then their whereabouts are unknown. However, the media has raised apprehensions that the family will be deported to Turkey upon the request by Turkish government.

The police have refused to not record a First Information Report (FIR). However, an application was filed at Sattokatla Police Station, Islamabad. It is mentioned in the application that around 20 people, including some women officers, arrived at Kacmaz’s residence and took him along with his two daughters into custody.

As per media reports, Kacmaz had sought asylum in Pakistan and that Pakistan has revoked the visas on the request of the Turkish government of foreign nationals working at the Pak-Turk International School. Turkey blamed US-based preacher Mr. Fethullah Gulen for a failed coup in July 2016 and has launched a crackdown against his supporters globally. The Pak-Turk Schools are administered by a foundation linked to Gulen.

Kacmaz’s colleagues fear that the Turkish family might have been picked up by law enforcement agencies for deportation to their country because they were living in Pakistan illegally without visa, though they have acquired a UNCHR certificate of asylum that permitted the former school director and his family to stay in Pakistan till November 2017.

Since February 2017 as many as 108 Turkish employees of the Pak-Turk Schools, along with their families, have been under the protection of the UN after Pakistani authorities denied them an extension of their visas to work in Pakistan.

As per Dawn News, the Turk families had requested the UNHCR that they be resettled in a country other than Turkey after Pakistan ordered to deport them. A spokesperson from the UNHCR confirmed that the affected will stay under UN protection until November 2017.
Earlier this year in February, the government of Pakistan has abruptly closed down 28 Turkish schools and colleges, issuing deportation orders for the 108 teaching and administrative staff to leave the country within three days. This arrangement was adopted on the orders of the Turkish government, prior to the arrival of Turkish President for a two-day official visit to Pakistan on November 16, 2016. For details see our statement;

The closure of 28 Pak-Turk Schools located across Pakistan has been done without considering the staff and students involved. More than 108 Turkish citizens are working as teachers and in other capacities at the schools run by the Pak-Turk Education Foundation in various cities of Pakistan, and many of them have been serving for more than a decade.

The fight between President Erdogan and cleric Gulen is an internal matter of Turkey. However, Pakistan’s government was unable to refuse to bring Turkey’s fight to Pakistan. Sadly, Pakistan has become a party in the political fight in Turkey.

Why are internal affairs of Turkey allowed to influence the local sensibility of a sovereign nation is beyond comprehension? The teachers and other staff of the Turkish schools and colleges have largely remained peaceful throughout their stay and have no track record of any criminal or seditious activity within or outside Pakistan. The disappearance of the entire family is politically motivated action to appease Erdogen Turk regiment with whom the Pakistan Government is on close terms. The arbitrary decision of the government of Pakistan is in violation of its own constitution and laws related to the right of equality before law.

Though the decision to deport the Turk staff of Pak-Turk School was made in February 2017, the Sindh High Court suspended the deportation order. The high courts of KP, Punjab and Baluchistan have done the same.
Enforced disappearance of foreign nationals is not a rarity in Pakistan. A Norwegian, Mr. Arjumandi has been missing for the past seven years. The Turk national are fleeing torture and ill treatment and it is Pakistan’s responsibility being a signatory to the UNCAT not to extradite them to the country where they fear for their lives, as per Article 3 of the UNCAT.

Certain rules of customary international law are so important that no government can violate them. The obligation not to send the Turk nationals back stems from the fundamental principles of humanity and therefore must not take a back seat to diplomacy and diplomatic ties.

The AHRC therefore urges the Government of Pakistan to immediately recover safely the Turk teacher and his wife and two daughters and provide them protection. If, there is any case against Mr. Mr. Kacmez, then he must be tried in open court. The perpetrators responsible for their abduction must be arrested and tried on the charges of abduction, torture and for detaining them incommunicado.

SRI LANKA: Mother was illegally arrested instead of the son »