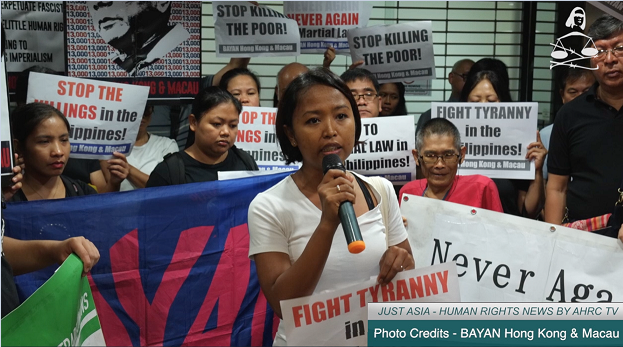 This week Just Asia begins with two shocking judgments in India, in two different cases of sexual assault. In the first, the Punjab and Haryana High Court suspended the sentences of three law students convicted of raping and blackmailing their female classmate, on the basis of unrelated and irrelevant aspects of the survivor’s lifestyle. In the second judgment, the Delhi High Court acquitted Mahmood Farooqui, a film director and artist, of raping a researcher in March 2015, on the basis that the testimony of the survivor was not reliable. The judgment bizarrely stated that, “Instances of woman behaviour are not unknown that a feeble “no” may mean a “yes”. This ridiculous basis for reversing the conviction once again shows how little judges in India understand the concept of consent.

Next, a protest action was held at the Philippines Consulate in Hong Kong on September 21, to mark the 45th anniversary of the declaration of martial law by former dictator Ferdinand Marcos. Organized by BAYAN Hong Kong and Macau, the protest was part of the internationally coordinated action against rising tyranny, dictatorship and martial law of the Duterte administration in the Philippines. Just Asia speaks to Eman Villaneuva, Chairperson of BAYAN, for more information.

Moving to Indonesia, after being attacked on September 16-17 and being closed for nearly 10 days, the office of Jakarta Legal Aid and Indonesian Legal Aid Foundation (YLBHI) reopened on September 25. Many civil society groups, activists and lawyers attended the reopening ceremony. They also demanded that the government guarantee the security and protection of the legal aid workers, and collected donations to repair the damages sustained in the mob attack.

A new United Nations report warns that a growing number of human rights defenders around the world are facing reprisals for cooperating with the UN on human rights. Asian countries mentioned in the report include China, India, Pakistan, Sri Lanka and Thailand. The retaliations range from travel bans and asset-freezing, to detention and torture. Just Asia speaks to AHRC’s MD Ashrafuzzaman, Liasion Officer, for his views.

Next, Human Rights Watch called on the UN to press the North Korean government to protect child victims of sexual abuse and harassment. Despite the North Korean government claiming acts of child sexual abuse are “inconceivable” for the country, Human Rights Watch has documented four cases of abuse between 2008 and 2015, and three other cases that took place in the early 2000s.

In Pakistan, the AHRC held its annual folk school for the year 2017 with the collaboration of the Pakistan Institute of Labour Education and Research (PILER). Selected human rights defenders from all over the country attended the event in Karachi, with the theme ‘Human Rights Defenders and the Criminal Justice system’.

PAKISTAN: A call to recover the Turk teacher and his wife and daughters who have disappeared after arrest »