Home / News / PAKISTAN: Press freedom in the line of fire

PAKISTAN: Press freedom in the line of fire 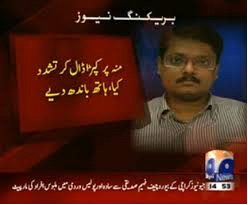 Freedom of the press is the cornerstone of every democracy. However, in states where democracy is little more than fascism in the façade of democracy, press freedom is the first casualty. This is the case in Pakistan, where journalists are suffering from an epidemic of violence.

The latest attack has been on Geo News Bureau Chief Fahim Siddiqui, who was abducted and subjected to torture before being dumped in Manghopir, the outskirts of Karachi, on 26 July 2015.

According to media reports, four men dressed in police uniform picked up Fahim. The men intercepted the car Fahim was travelling in. He was dragged out of the car and taken away in a police van. The alleged police officials continued to beat Fahim the entire way, abusing him as well as channel that he works for. They also took away his cell phone and licensed firearm.

Fahim used to host a weekly programme called FIR, covering the world of crime, before he was elevated to the position of Bureau Chief of Geo News. Apparently the programme did not go down well with the police officers, who were being regularly criticized for their inefficiency and ineptitude. Though the motive behind the incident has yet to be ascertained, the Federal Minister of the Interior has promised to conduct an inquiry.

Freedom Network, Pakistan’s first media watchdog organization, has noted in its press freedom alert that “the kidnapping of Fahim Siddiqui is a reminder of the threat journalists in general and Geo News staff in particular face in Karachi and elsewhere in the country since the attack on Hamdi Mir in April last year”.

With 14 journalists killed between May 2014 and April 2015, Pakistan remains the most dangerous country in the world for journalists, according to the International Federation of Journalists. Ranked 159 out of 180 countries in the 2015 Reporters without Borders press freedom index, Pakistan is prey to every kind of enemy of freedom of information and is a place where journalists are most at risk.

Journalists in Pakistan are prone to violence and threats from militants and military alike, who are unaccustomed to dissent and criticism. The murders of journalists usually go unpunished, as the law enforcement agencies are afforded full impunity by the State.

On 29 April 2015, Yasir Rizvi, a prominent journalist and professor at Karachi University was gunned down in his car outside Karachi University. The murder occurred just four days after media and human rights activist Sabeen Mahmudwas gunned down in Karachi, immediately after she organized a discussion about violence in Baluchistan. Both the murders have gone unpunished.

The relentless spree of violence against media personnel is likely to lead to more self-censorship and a further erosion of Pakistan’s already fragile media freedom. Journalists working for Urdu-language TV and print media are most often in the line of fire, targeted by military intelligence especially, because Urdu language media has a mass viewership and deeper penetration in the country as compared to English dailies, and is more influential in building public opinion.

Pakistani journalists are being forced to flee or go into hiding to escape acts of violence and intimidation. The authorities have not kept their promise to protect media personnel and are sometimes even responsible for these abuses. The fact that crimes of violence against journalists are rarely investigated and punished reinforces the threat to freedom of expression and press.

Mainstream media channels such as Geo News have been brought to court on blasphemy charges and have even been suspended from broadcasting, following a rift with security agencies. The phones of journalist are regularly tapped by military intelligence, whenever they feel that a journalist is not toeing the line and criticizing the military openly, particularly in the electronic media. Hamid Mir and Raza Rumi are cases in point; both the journalists were attacked for openly criticizing military. Many journalists divulge that they have been harassed and they share this information to their employers on the understanding that it would be made public only if they are killed or kidnapped. Such is the prevailing fear of reprisals from the military and militants the most powerful forces roaming Pakistan with impunity.

The Constitution of Pakistan guarantees freedom of press under Article 19, subject to “reasonable restrictions”. However, the freedom of the press is curtailed by the ambiguous wording of the provision, which states that

“There shall be freedom of the press, subject to any reasonable restrictions imposed by law in the interest of the glory of Islam or the integrity, security or defence of Pakistan or any part thereof, friendly relations with foreign States, public order, decency or morality, or in relation to contempt of court, [commission of] or incitement to an offence.”

The article falls short of meeting international standards for the protection of the right to freedom of expression. The use of words like “reasonable restrictions” are themselves curtailing freedom, when the international standards and the rest of the world advocate “necessary” or “legitimate aim”, as well as “clear and present threat.” The long list of exceptions weakens the strength of this guarantee. The muzzling of freedom of expression thus ensure that Pakistani democracy, which, in essence, is an autocracy, perpetuates its autocratic regime without being questioned by societal conscious that is its press.

A recent letter of joint solidarity, signed by more than 70 high-level journalists, has called on media owners to create a code of ethics that incorporates best practices on ethical journalism, in order to reduce the risks that journalists face.

The attacks on journalists are an attack, not just on individuals, but also on freedom of expression, and therefore an attack on civil society and the very State itself. When the public’s right to know is threatened, and when the rights of free speech and free press are at risk, all of the other liberties held dear are endangered.

The State must ensure that journalists are protected and freedom of press is ensured. It is incumbent upon the Pakistani State, being a signatory to the ICCPR, to ensure that the right to freedom of expression is guaranteed to every individual.

WORLD: Gross Adulteration of the US TIP Report »