Violence has spread in Aluthgama. According to reports, it has so far caused three deaths, as well as injuries to many persons and damage to some Muslim places of worship and gathering. The violence has driven many women and children out of their homes into places of refuge. The man leading this mayhem is a Buddhist monk named Galagoda-Atte Gnanasara Thera.

His threats are quite clear. He threatens to destroy Muslim businesses at Aluthgama, Beruwala and other places. He instructs his listeners to grab any bags with Halal signs and throw them on the ground. He asks his audience to fight against the minorities. Part of the audience shouts back saying yes, they will do it. The monk calls the President of Sri Lanka Mahinda Rajapaksa a brainless person and asks whether any person with brains would appoint a Muslim to be a Minister of Justice. He tells the crowd that party politics have destroyed us and calls upon the crowd to unite and take things into their own hands. 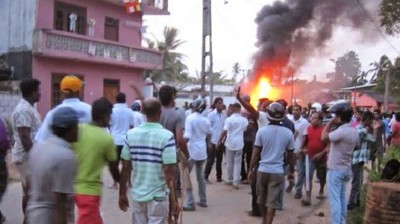 Things are set on fire and another disciple of his sings poetry to the crowd, asking them to rise up.

According to the monk, the minorities are organizing themselves and he calls upon the Sinhalese to wake up and fight back before they get destroyed.

Large numbers of policemen can be seen in the background with heavy weapons. They do nothing to stop the violence or the calls for more violence.

In recent years, every student demonstration, every attempt by the trade unionists to bring their grievances to the public, and even the protests by fishermen on issues relating to their livelihood have been met by severe repercussions by the police, the Special Task Force (STF) and even the military. In such attacks on demonstrations, many people have even been killed and many others have been seriously injured. Even more persons have been arrested, brought before courts and remanded.

However, when the BBS openly call people to violence and engage in rioting and arson, there is no retaliation. Instead, the police provide protection for holding such gatherings aimed purely to cause violence on minorities, particularly against Muslims.
June is a month away from July and it is natural for memories of Black July to come forward when such rioting and mayhem is unleashed.

There is no doubt that this violence has the blessings of the government and the Ministry of Defence. Strangely, the idea of national security in Sri Lanka seems to incorporate allowing a free hand for violence against the minorities. Using mobs for this purpose and allowing lawlessness is strangely a part of a “security plan”. The Asian Human Rights Commission has constantly warned that lawlessness, when allowed, knows no bounds. The Rajapaksa regime is committed to the pursuit of lawlessness. Without any doubt, the country is facing extremely dangerous times.

It is under these circumstances that the government is asking the parliament to decide on whether to give permission to UN investigators to come to Sri Lanka. At no stage has the government opened a debate on the violence caused by the BBS and the threats to peace caused by rioting and mayhem under the leadership of Galagoda-Atte Gnanasara Thera. The government is concerned about the possibility of investigations being held on crimes, including war crimes. Sri Lanka is turning into a strange country, one in which investigating crimes, no matter how serious, is disallowed.