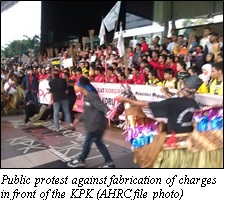 The Asian Human Rights Commission (AHRC) condemns the actions of the police of the Republic of Indonesia, which has been actively working towards fabricating charges in numerous recent cases. Last month, the AHRC issued an urgent appeal AHRC-UAC-070-2015 in such a case, wherein a senior Corruption Eradication Commission investigator has been arrested and charged.

President Widodo cancelled the candidacy for Komjen Pol Gunawan, a candidate for the National Police Chief, because the Corruption Eradication Commission (KPK) named him as a graft suspect. The President finally took serious consideration of the input of team nine, an ad hoc team established by the President to provide information about whether or not Komjen Pol Gunawan should be considered as candidate for the Chief of National Police.

However, the AHRC has learned that following the cancelation, in the past 6 months, the number of cases involving fabrication of charges by the police has risen sharply. This spike in illegalities has arrived under the watch of the Head of Criminal Investigation Bureau (Kabareskrim), Commissaries General (Komjen Pol) Budi Waseso.

Komjen Pol Waseso, had a previous rank of Brigadier General, when he was in charge as the Chief of Police of Gorontalo Province police area (Kapolda Gorontalo), and, within one year, he subsequently become Commissaries General (one star to a three star General).

According to the Commission for Disappeared and Victims of Violence (KontraS), a prominent national NGO, and also the Civil Society Coalition for Security Sector Reform (Koalisi Masyarakat Sipil untuk Reformasi Sektor Keamanan), before being in charge as Kabareskrim, Komjen Pol Waseso had allegedly abused his power.

For instance, in 2012, when he was in charge as the Head of the Bureau of Internal Security (Karopaminal), he illegally transferred Senior Commissary (Kombes Pol) Jenmard Mangouli, a Vice Chief Of Police of North Sulawesi Province police area (Polda Sulawesi Utara), to the National Police Head Quarters without clear job and position. At that time, Kombes Pol Mangouli reported Waseso to Provost and Security (internal police mechanism), but the result of the ensuing process never became public.

Additionally, Komjen Pol Waseso declined to report his wealth to the KPK, as well as the Financial Transaction Reports and Analysis Centre (PPATK), as is required by law. He instead challenged the KPK to launch an investigation if it was so interested.

The AHRC has been informed that Komjen Pol Waseso was promoted to be Kabareskrim due to intervention from Komjen Pol Gunawan (a suspect of graft), who was charged while he was in a very strategic position in the National Police Headquarter; he is currently the Vice Chief of National Police (Wakapolri). After Komjen Pol Waseso was appoitned as the new Kabareskrim, he sought to fabricate charges and implicate everybody that was or is against the interests of Komjen Pol Gunawan.

For instance, consider the fabricated charges in the cases of Mr. Abraham Samad, the Chairperson of KPK, and Mr. Bambang Widjojanto, a KPK Commissioner. They were charged and named as suspects in minor cases, immediately after they publicly named Komjen Pol Gunawan as a suspect of graft. Finally, they resigned from KPK due to requirement of law – whenever KPK commissioners are named as suspects they must resign.

The police – particularly since Komjen Pol Waseso took charge as Kabareskrim – have been practicing discriminatory law enforcement. For instance, when there are reports submitted to the police on torture cases, and allegations of police abuse, the police will not take up the cases seriously. And, on the contrary, when there are reports related to the allegation of corruption against Komjen Pol Gunawan, the police will immediately process and charge the persons that report such allegations of corruption.

Therefore, the AHRC calls for the Government of Indonesia, in particular President Widodo, to order the Chief of National Police, General Baddrodin Haiti, to immediately stop any form of fabrication of charges against anyone calling for investigation on allegations of corruption involving Komjen Pol Gunawan. Furthermore, the allegations of corruption related to Komjen Pol Gunawan must be investigated immediately and impartially without undue delay.

The President, as the ultimate commander of the National Police, should immediately ensure the investigation and examination of Komjen Pol Waseso for his involvement in fabricating charges and replace him with another ranking police officer that has an unblemished track record and a history of professionalism.

The AHRC also respectfully requests President Widodo to ensure the continuance of police reform, which has been proceeding since the police separated from the Military in 2002.

Lastly, the AHRC would also like to ask President Widodo to examine whether the current police structure, under the President, is the ideal structure. Consideration needs to be given to whether the institution should be moved under the Ministry of Interior, because under the President there is currently no effective internal and external oversight to ensure the continuation of police reform.

About AHRC:The Asian Human Rights Commission is a regional non-governmental organisation that monitors human rights in Asia, documents violations and advocates for justice and institutional reform to ensure the protection and promotion of these rights. The Hong Kong-based group was founded in 1984.