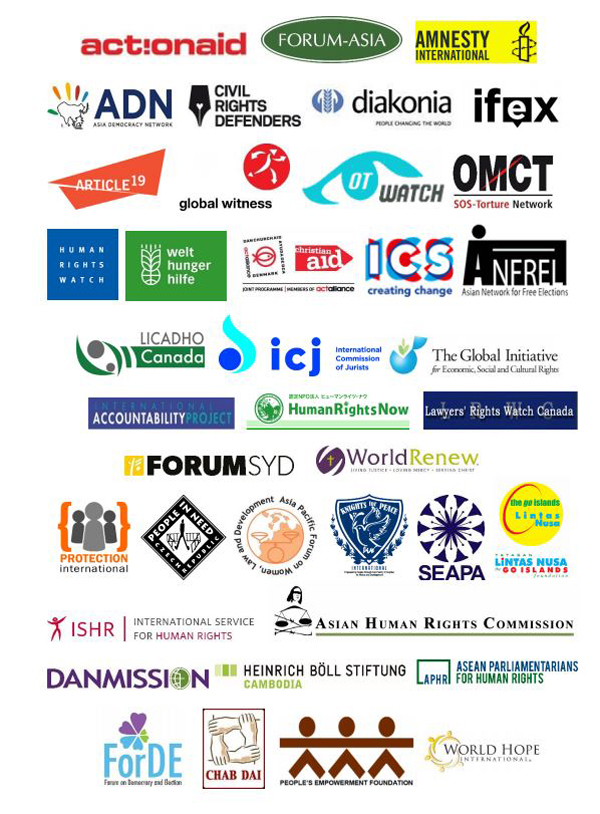 Re: Law on Associations and Non-Governmental Organizations

We, the undersigned international non-governmental organizations (NGOs) and membership organizations call on the government of Cambodia to immediately withdraw the draft Law on Associations and Non-Governmental Organizations (LANGO) submitted before the National Assembly and apparently scheduled for a vote on 10 July 2015. The government has failed to engage in serious and meaningful consultations with affected groups or the wider public. At the National Assembly, the draft law has been subject only to a pro-forma review by assembly commissions controlled by the governing Cambodian People’s Party (CPP), continuing to ignore civil society concerns about the unnecessary restrictions it imposes and its potential for arbitrary implementation against critical groups and individuals. A law affecting fundamental rights should not be given so cursory consideration.

This legislation, if adopted, would seriously damage the ability of many domestic and international associations and NGOs, as well as community-based advocacy movements, to work effectively in Cambodia. The law would give the Interior, Foreign Affairs and other ministries sweeping, arbitrary powers to shut down existing domestic and foreign membership groups and staffed organizations, unchecked through judicial review, and to prohibit the creation of new ones, while criminalizing activities by non-registered groups.

Furthermore, the restrictions on the right to association contained in LANGO go beyond the permissible limitations allowed by international human rights law and are unnecessary for any legitimate purpose. Legislation already in force in Cambodia is fully sufficient to appropriately regulate the activities of NGOs and other associations and to allow prosecution where criminal acts have been committed.

Recent events and the manner in which the LANGO is now being rushed through the National Assembly on an expedited schedule have heightened our concern that the almost certain consequence will be to impose new draconian and impermissibly excessive restrictions on the exercise of the rights to freedom of peaceful assembly, association, expression and opinion – rights safeguarded under the Constitution of Cambodia and the International Covenant on Civil and Political Rights (ICCPR), to which Cambodia is a party.

Initially, a CPP member of the National Assembly was reported as saying there would be a parliamentary consultation with civil society on the draft in early August. The CPP then announced such a consultation would happen on 10 July. It has since been re-scheduled again, with the CPP saying the consultation will happen on 8 July, and announcing at the same time that the National Assembly would meet in an extraordinary session to consider the law on 10 July, on which date it seems very likely that LANGO will be adopted.

This acceleration of the legislative schedule comes after security forces attempted to suppress peaceful civil society protests against the draft law on 28, 29 and 30 June, such as preventing the launching of balloons to symbolize this opposition and obstructing peaceful marches. The concerted efforts of the authorities to frustrate peaceful opposition to the draft law has been accompanied by threats from national and local government officials to use the LANGO to curtail human rights monitoring activities once the law is in place. International groups considering establishing themselves in Cambodia are also being deterred from doing so by the prospect of the law’s implementation.

We believe the two-and-a-quarter hour parliamentary “consultation” consisting of question and answer sessions for civil society and others now scheduled for 8 July is not intended to be a genuine consultation and offers little prospect of bringing the law into compliance with international human rights standards, including those in Cambodia’s Constitution, the ICCPR and the United Nations Declaration on the Right and Responsibility of Individuals, Groups and Organs of Society to Promote and Protect Universally Recognized Human Rights and Fundamental Freedoms (Human Rights Defenders Declaration). As described by CPP parliamentary spokesperson Chheang Vun, the event appears to be little more than an opportunity for the government to reiterate its insistence on passage of the draft as is, and to make groups who oppose the law “understand” the need for it. Moreover, the advance scheduling of the National Assembly session on 10 July leaves little doubt as to the government’s intent to go through LANGO without substantial changes. In any case, the failure of the government to effectively consult on the LANGO draft with relevant stakeholders throughout the process has led to an inherently flawed draft contrary to international law.

If the government of Cambodia is truly serious about the protection and promotion of human rights, it should stop rushing down this precipitous path to the adoption of this unnecessary and non-human rights-respecting legislation now before the National Assembly. It should instead embark upon a path of general legal reform to guarantee in practice the rights of which Cambodians are currently being denied and have been denied for much too long.

« SRI LANKA: Modernising of the police – an example from Kerala