SRI LANKA: A tribute to Ranjith Abeysuriya – an exemplary civil servant and a conscientious citizen 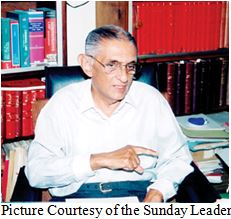 The Asian Human Rights Commission is saddened to learn of the death of Deshamanya Ranjith Abeysuriya PC, a man of impeccable integrity who contributed for many years in various capacities to the protection of the rights of Sri Lankan citizens in a period which saw some of the most devastating attacks on democracy and the rule of law system in the country.

He is best remembered as the first chairperson of the National Police Commission (NPC), which was created under the 17th Amendment to the Constitution. He held this post at a time when, due to the adverse impact of the executive presidential system the Sri Lankan police service acquired the reputation of being a highly politicized institution which was suppressed and subordinated to the whims of the ruling party politicians. The 17th Amendment arose when the bitter realisation of the destructive nature of the executive presidential system dawned on the members of parliament representing different political parties. The worst part of the criticism was on the policing system.

As the chairperson of the NPC it fell on Ranjith Abeysuriya to rescue this all-important national institution so that it could serve the purposes of protecting the citizens within a framework of the rule of law. It was to his credit that he was able to get the cooperation of the police officers themselves of various ranks and many others for this purpose. The great success he achieved within the short period of three years so shocked the corrupt politicians that a conspiracy to undo the independent police commission and other similar commissions was launched and the 17th Amendment was unceremoniously buried.

During the period of the NPC’s operations under this chairmanship the AHRC worked in close association with him and therefore on the basis of close observation we were able to see his enormous dedication to the task and even more impressively, his dedication to the principles which he so cherished. His way of critiquing the destructive political interference was by way of practical action in steering this new institution in such a way to demonstrate that it was possible for a committed bureaucrat to defeat devastating political schemes. The 18th Amendment to the Constitution, adopted by the Rajapaksa regime, drove the final nail into the possibility of the repetition of such attempts as those undertaken by Ranjith Abeysuriya.

As the chairperson of the NPC he paid serious attention to the public criticism of the police. Being a senior prosecutor for many decades he was sometimes unaware of the experience of the public and their perceptions of the Sri Lankan policing system. For example, initially he was skeptical about many reports concerning torture taking place in the police stations. However, as an honest and conscientious person he made inquiries into these allegations and soon came to realise that torture exists as an endemic problem within the policing system. He was keen to take firm action to stop this practice and for that purpose he took many genuine initiatives. He even requested the draft of legislation under the powers of the Police Commission in terms of the 17th Amendment in order to implement a system of credible inquiries by the NPC.

He was quite open to receive complaints and recommendations from civil society organisations and dealt with such contributions in a professional and serious manner.

For a man so imbibed with the basic philosophies and the principles of the rule of law the last years of his life would have been a bitter disappointment. A man who never curried the favour of those in power or sought their patronage he lived a quiet life and left an example of integrity and dedication to principles.

The AHRC offers its condolences to his family.

« SRI LANKA: The dying of men and institutions

PAKISTAN: An Ahmadi humanitarian activist is shot dead – the police show no interest in investigating the case »