At 3am on May 20, 2014, General Prayuth Chan-ocha, the Commander-in-Chief of the Royal Thai Army, announced that martial law was immediately in force. After two days of uncertainty, in which martial law co-existed with the constitution and the caretaker government remained nominally in power, General Prayuth led a coup at approximately 5 pm on May 22, 2014. A military junta, acting in the name of the National Order Maintenance Council (NOMC), abrogated the 2007 Constitution and installed itself as the government. Under martial law, there were already significant restrictions on freedom of expression and political freedom in place, and the military possessed extensive power to arrest and detain arbitrarily. Prior to the coup, there were severe restrictions on political demonstration put in place; subsequent to the coup, all political gatherings are illegal. The coup has intensified the power of the military. After over six months of increasing political contention during which the military remained largely silent, they have spoken through the violence of the coup. 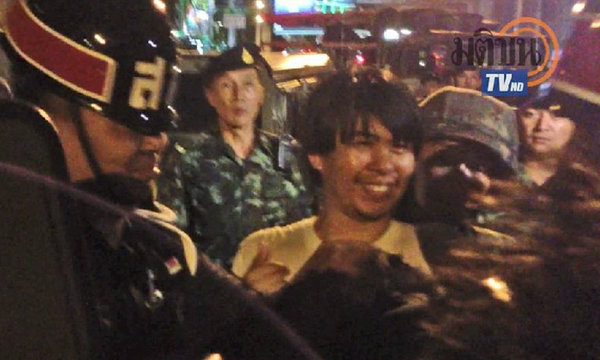 One day after the coup, citizens began to peacefully express their opposition to the coup in defiance of martial law and the junta’s orders. Beginning at 5 pm on May 23, 2014, hundreds of Thai citizens began peacefully demonstrating against the coup in front of the Bangkok Art and Cultural Center in Siam Square in central Bangkok. Citizens lit candles and stood in groups and held signs criticising the coup and the imposition of military rule. Similar gatherings were held in other cities throughout the country.

After allowing the protest to take place for several, the military then took action to arrest peaceful demonstrators and end the event. Prachatai online newspaper has reported that 7.30 pm, at least five persons, two women and three men, were arrested by the soldiers in front of the Bangkok Art and Cultural Center. The identities of the two women are not known, but Prachatai has reported that the three men who were arrested and taken are Thanapol Eawsakul (editor of Same Sky magazine), Apichat Phongsawat, and Bunyarak Wattanarat (age 20) (A video of the arrest was made by Matichon TV and can be viewed here) By 8.10 pm, the soldiers had taken control of the area and the demonstrations had dispersed. At this time of this statement, the location and conditions of the five people taken by the soldiers is not known. 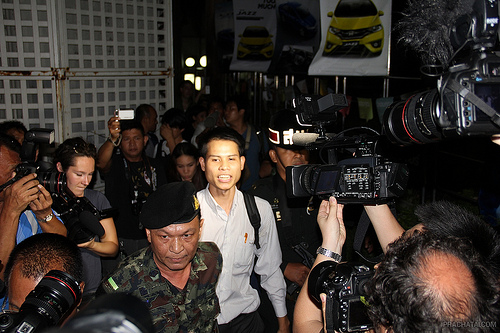 Under the terms of martial law, which have been in place since two days prior to the coup, soldiers can detain and interrogate anyone for up to seven days without having to provide evidence of wrongdoing or bring formal charges. People arrested can be held at irregular places of detention, including permanent or temporary military bases or other sites designated as places of detention. Detention in irregular places means that the possibility for rights violations, including torture, forced disappearance and extrajudicial execution is greatly increased. In southern Thailand, where martial law has been in continual force since January 2004, the instrument has been used to arbitrarily detain and activists as well as ordinary citizens.

In the years of political turmoil since the September 19, 2006 coup, a strong and robust culture of human rights protection and criticism of injustice has grown in Thailand. Scholars, intellectual and writers outside universities, human rights lawyers and nongovernmental organization activists, students, and others have publicly written, spoken, and demonstrated against state violence, the lack of accountability for state abuses, the unequal application of law and the constriction of freedom of speech. This awareness and action in the service of human rights is behind the peaceful protests against the coup on May 23, 2014. These protests are likely to continue. The AHRC is concerned that human rights defenders and dissidents who peacefully protest, or who have expressed criticism in the past eight years, will be targeted by the junta. The AHRC is further concerned that given the extensive powers granted to the military under martial law and in absence of a constitution, the actions taken by the junta will lack transparency and accountability, and will function to create an atmosphere of fear that is detrimental to human rights and the rule of law.

The Asian Human Rights Commission unequivocally condemns the coup and crackdown on rights and liberties in Thailand. The AHRC is gravely concerned about the safety of Thanapol Eawsakul, Apichat Phongsawat, Bunyarat Wattanarat and others who were arrested and taken by the military following the peaceful demonstration on May 23, 2014. They are citizens who were expressing their opinion peacefully and are a danger to no one. The AHRC calls on the National Order Maintenance Council to immediately release them and any others who are being arbitrarily detained.

THAILAND: Army issues summons to activists, academics, writers, and others »