Home / News / PAKISTAN: Press clubs are under threats of suicide attacks by the Taliban — typically the government takes no action

PAKISTAN: Press clubs are under threats of suicide attacks by the Taliban — typically the government takes no action 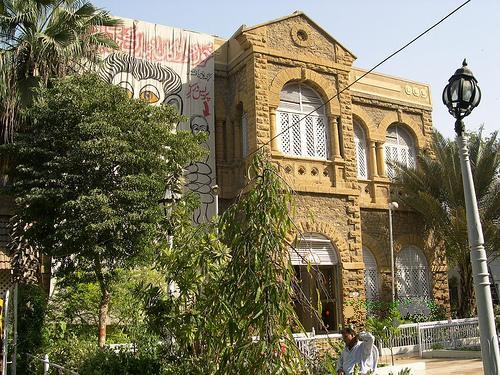 The correspondents of international media houses have been warned not to attend meetings or gatherings at the premises of the different press clubs in the major cities of the country. A circular from a well known international news agency that wishes to remain anonymous for security reasons, was issued to its correspondents asking them to refrain from attending events at the press clubs of major cities which are under threat of suicide attacks by the Taliban.

Sources close to the international media say that the Taliban is planning to attack these press clubs as they have become the focal point of different gatherings and protests by civil society. It is known that the Taliban has made a hit list which mentions the names of the targeted clubs. The Karachi Press Club (KPC) is at the top of the list and as far as the Taliban are concerned the KPC is the ‘worst offender’ in providing space for members of civil society who wish to air their grievances. It has become a center point for demonstrations and protests which attracts hundreds of people on an almost daily basis. The journalists allege that the Taliban’s main intention is to intimidate the media, the journalists and their institutions so that they stop reporting and commenting on their activities and their ultimate aim which is to create an Islamic society. The other motive of targeting the press clubs is to create a psychosis of fear in general and suppress those who firmly believe in the freedom of speech, of the media and the freedom of thought.

The news of Taliban’s threat was issued over the websites of the different international news agencies but after some hours the same agencies withdrew the news because of threats to their correspondents in Pakistan and particularly, for their sources who are stationed in the conflict zones. There is also the very real possibility of the security of the stations being compromised. The local journalists and the office bearers of the different press clubs and journalists organizations informed the federal and provincial governments about these threats but typically, no security measures has been instigated by them.

This is a very alarming situation not only for the security of the press clubs and journalists but also for the growth and development of a democratic society. Since the creation of Pakistan, 63 years ago there has been a constant struggle for the freedom of the media during which hundreds of journalists have sacrificed their lives. They have been victimised not only by the military regimes but also by the elected governments. Now, the plan to conduct suicide attacks on the press clubs will in every aspect serve the purpose of undermining the freedom of thought, expression and freedom to adopt an opinion based on conscience and belief without interference.

The journalists see the inaction of the government as confirmation that it also wishes to have them silenced. It must be noted that the press clubs are not only places for journalists but for the people themselves. Due to the arrogant, cruel and indifferent attitude of the law enforcement agencies regarding protest gatherings it is only the press clubs that people can go to and use to get their messages across.

The Asian Human Rights Commission urges the government to take this threat seriously. It has a sworn duty to provide security for any person or organisation which might come under threat. In this duty, it can be seen by recent events that the government has developed selective vision when it comes to providing protection. This can be seen by the deaths of Governor Taseer and the Federal Minister for Minority Affairs, Bhatti. The international community is now aware of the very real threats by the Taliban and if they are allowed to carry out these threats it is only the government of Pakistan which will be seen as culpable for their negligence. The failure of the government to ensure security to the citizens may also be seen in their failure to provide security to vital military installations. While it may be argued that it is the responsibility of the military to guard their own establishments despite calls from the media and civil society the government has not at any time called for a credible investigation into these attacks, the most recent of which was the attack on the naval base at Karachi.

SRI LANKA: A report on 323 cases of police torture in Sri Lanka »