Home / News / PAKISTAN: Protests against disappearances rise and the level of tolerance from the law enforcement agencies declines

PAKISTAN: Protests against disappearances rise and the level of tolerance from the law enforcement agencies declines 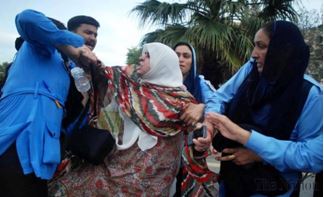 The people of Pakistan watched the brutal attack by the police on a peaceful demonstration for the recovery of disappeared persons in front of Parliament House in Islamabad on April 28. There were more than 250 persons including a good number of women and children who were from the family members of disappeared persons. The peaceful protest was conducted under the banner of, ‘Defence of Human Rights’ (DHR) and was led by its chairperson, Mrs. Amina Masood Janjua. According to media reports, the protesters were attempting to approach Parliament House in Islamabad’s Red Zone area. Police resorted to baton-charging and aerial firing and also fired tear gas canisters to disperse the demonstrators, as a result of which several persons fell unconscious. The resultant clash also left six police personnel, including two women and four men wounded. Amna Masood Janjua, who is a human rights activist and campaigner on the issue of missing persons, was arrested. The police also tried to confiscate the cameras and other equipment, of media teams that were covering the incident.

According to AFP, several journalists were wounded and had their equipment damaged due to the excessive use of force by security personnel. The police began to target the media personnel when they gathered around Mrs. Janjua in an effort to grab footage of the police manhandling and forcing the human rights campaigner into a vehicle. At least three media persons were wounded in the police action. Moreover, several activists and media personnel were also taken into custody by the police. Many persons including women and children were injured.

After the incident Prime Minister took the notice of the incident and ordered the release of Mrs. Janjua and all others who were arrested. He also ordered the suspension of the police officers responsible for the attack on the demonstrators. After their release the participants of the protest again held a peaceful camp in front of Parliament House which continues as of the time of writing.

Their demand is that the government must immediately take steps to recover the disappeared persons who are in the custody of the intelligence agencies and armed forces.

Mrs. Janjua’s husband has been missing since 2005 after his arrest by the intelligence agencies and since then she filed a case for his recovery which is pending before the Supreme Court, which, has so far, failed to produce him. She, along with many of the family members of missing persons is struggling for the recovery of their loved ones. Since the disappearance of her husband she has been constantly on the streets with other family members. She has also filed many petitions on behalf of other missing persons.

Disappointed with the slow process of the courts she has become very bitter about the Supreme Court and its benches. This is especially so as she was among those groups who joined the fight for the restoration of an independent judiciary and the former chief justice, Iftekhar Mohammad Choudhry. Mrs. Janjua attends court hearings on a daily basis and has moved nearly 70 petitions so far and represented over 750 cases of enforced disappearances. At one time or another she has appeared before every judge of the Supreme Court of Pakistan in the last nine years.

She has communicated with the AHRC that, “It is observed that the attitude of the Supreme Court towards cases of enforced disappearance has somewhat changed. A case fixed on 9th of April 2014 after 8 months wait was dismissed at once on its very first hearing without letting anyone speak. Another case presented in the Court of Justice Anwer Zaheer jamali, was simply adjourned without any date given. All the high profile old cases are gradually being either shifted to the Commission of Inquiry or disposed off”.

Mrs. Janjua stated that a prime example of this attitude of the court was visible in the case of her husband. A statement by Dr Imran Munir, who has seen Masood Janjua in secret detention, was to be recorded on 31st March 2014. However, she stated with a sigh that, “After the order dated 13th March 2014 was passed for recording of video link statement of Masood’s star witness Dr. Imran Munir, my hopes were becoming higher and higher, expecting that my husband will be home just any day. In the same hearing Justice Khawaj remarked that this case was a great trial for the family of Masood and needed a closure.”

However Mrs. Janjua was alarmed when the composition of the bench was changed at the eleventh hour. Justice Jawad S. Khawaja, Justice Iqbal Hameed-ur-Rehman and Justice Musheer Alam were replaced by Justice Anwar Zaheer Jamali, Justice Saqib Nisar and Justice Dost Muhammad Khan.

She was shocked to the point of bewilderment when during the proceedings Justice Anwer Zaheer Jamali addressed her and said, “How far do we go for you? We have already done enough. Now there is a danger of confrontation of the (state) institutions because of your case.”

It is important to note that with the nation-wide increase in demonstrations and court cases concerning disappearances, the tolerance of the judiciary and the security forces is decreasing in equal measure

In the recent assassination attempt on a famous anchor personality Mr. Hamid Mir, by unknown persons in the vicinity of the Karachi Airport, one of the reasons for the attack was his coverage of disappearances in Balochistan. He and his brother stated before the attack that he had been receiving threats from different persons, particularly from the ISI for his extensive coverage on the disappearances. For further information please see the Urgent Appeal, PAKISTAN: Protect media from the onslaught of the military establishment.

To divert the attention of the public from the issue of disappearances the government and the military are organising rallies by the religious parties and banned organisations in favour of the ISI and military establishments. It has become very difficult, if not openly dangerous, to discuss the issue of disappearances as the tolerance levels of the military and the intelligence agencies is dropping rapidly.

The AHRC urges the government of Prime Minister Nawaz Sharif to pay more attention to the establishment of the rule of law rather than dealing with issues by using the force of law and order. Until and unless the process of justice and investigation are reformed then such issues as enforced disappearances will continue to haunt the country and the government. It will continue to be blackmailed by the law enforcement and intelligence agencies if it does not stand up to them now.