INDIA: Is judicial morale that low? 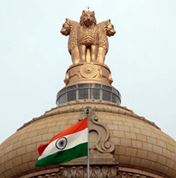 The decision of a high court judge in Kerala to stop hearing a case, following the visit of a lawyer who allegedly trying to influence him, is another symptom of low morale within the judiciary as well as the Bar. The judge in question, Justice C. T. Ravikumar, was hearing a series of litigations relating to the issuance of bar licences in the state.

Justice Ravikumar decided not to pronounce the judgement he had prepared, after a lawyer on the rolls at the High Court Bar, Mr. Thawamani, visited the judge and allegedly tried to influence the judge. The lawyer has denied the charges, but has admitted visiting the judge, against which the Bar Council of Kerala has initiated a suo motu inquiry.

While the judge’s act appears honourable and reaffirms his professional integrity, a few disturbing questions arise, particularly since this is not an isolated incident. In at least four occasions in the past 12 months, trial as well as appellate court judges in India have refused to hear cases any further, due to either lawyers or parties to the litigation having allegedly tried to influence proceedings. In none of these previous occasions has there been an inquiry, the results of which have been made public.

What action has the Indian judiciary taken to prevent such incidents from re-occurring? This question is fundamental; a judge alleging that she/he has been approached inappropriately by a person interested in case proceedings, is a serious event, which, if allowed into practice, has the potential to reduce public confidence in the judiciary further.

In India, as in many other jurisdictions, there are no set laws and rules that bind judges from excusing themselves from hearing a case. Given this fact, the practice of recusal could be used by a judge or a person interested in the lis to protract  proceedings. Can the judiciary guarantee that such a possibility has been ruled out?

Next, what is this environment that prevails wherein a Bar members can dare visit a judge and discuss matters being adjudicated by the same judge? What action is possible through the Bar Council to end such alleged professional misconduct to ensure Mr. Thawamani’s visit to Justice Ravikumar is the last such incident? The Advocates Act, 1961, or the Bar Council of India Rules, promulgated in 1975, do not specify what amounts to misconduct by a lawyer. Legal lacuna must be addressed.

Based on these principles and recognising the importance of the role played by judges and lawyers in preserving the rule of law, the UN has also created a special procedure mandate on the subject, having appointed a Special Rapporteur to deal with the subject of independence of judges and lawyers. A judge, a lawyer, or the institution these professionals represent, defaulting in mandate will have serious adverse consequences on the rule of law regime in the jurisdiction they represent, thereby contributing to the diminishing of the principles of democracy in that country.

A lawyer trying to unduly influence a judge is indeed professional misconduct, against which the Bar Council has a responsibility to act. Devoid of the status of being a member of the Bar, the person involved in the present case is an individual. And, henceforth, any alleged act of interference by this person, if proven, constitutes a crime, one of interference with due process.

Viewed from such a position, trying to unduly influence a judge must be treated as a crime that needs to be investigated by the police, based on a complaint by the judge concerned or an officer of the court. Any failure to make such a complaint, implies preferential treatment to lawyers. This would negate the fundamental principle of equality before the law, which the judiciary, above all, is bound to protect.

In this case, and in all such incidents in the past, no complaint of a crime has been reported registered against any suspect exercising the alleged malice in India.

Hence, one may question the futility of the judge’s recusal, since, apart from the decision getting protracted, nothing meaningful can arise from such an action. A judge recusing himself or herself from hearing a case serves no purpose, unless, the judge declares, that as an adjudicating officer, he or she has a conflict of interest in the lis.

Judges entertain a low level of confidence about public perception of their professional independence. This is a concern that the judiciary and the Bar should compete to address. Their failure to remedy this will keep pushing the Indian judiciary deeper into an abyss of mistrust and demoralisation, from were there can be no easy escape.

THAILAND: Demanding Immediate Explanation and Investigation by Relevant Officials Regarding the Disappearance of a Karen Hill-Tribe Human Rights Defender »