The Asian Human Rights Commission (AHRC) is particularly concerned about the residents of villages in Nepal devastated by the impact of a 7.8 Richter scale earthquake, and its destructive aftershocks. The loss of human lives, over 7,000 and counting, and the destruction of infrastructure supporting daily lives, already under stress in one of the poorest countries on earth, has been terrible. Food, water and medical resources are scarce. So many need help; it is overwhelming to even fathom where to begin. The next few months will be a struggle: infrastructure for food, water, and shelter stand compromised as the rainy season begins.

International help is direly needed now. The indications, however, are that the offers of international assistance are being poorly managed, and the consequences will be negative. While thanking the international community for their generous support in the aftermath of the massive earthquake, the Nepal government has asked all Search and Rescue (SAR) teams that arrived in Nepal from 34 countries to return home. If the global community walks away, the people of Nepal will not receive the assistance required for them to rebuild their lives. 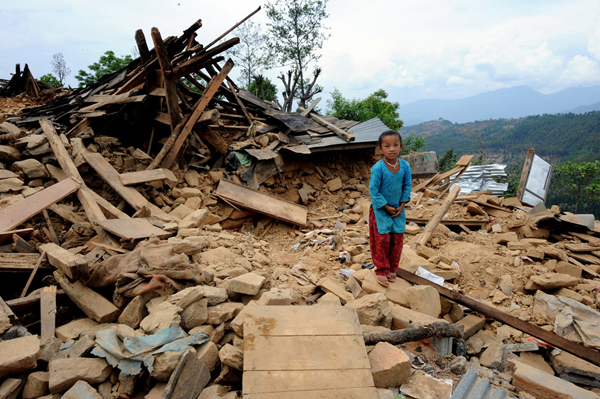 Akriti Tamang, 8, searches for her books amid the rubble and ruins of her destroyed home, in Sangachowk Village, Sindhupalchowk District, one of the areas worst affected by the massive earthquake in Nepal. Photo: UNICEF/Chandra Shekhar Karki

With few exceptions, the state has, so far, performed miserably in the aftermath of the earthquake.

The lack of decentralized governance in the past two decades has become a glaring fissure following the quake. The largest oversight in the government’s disaster preparedness is the lack of robust, empowered local governance. Local elections have not been held since 1997, leaving villages and towns at the mercy of the whims of centrally appointed bureaucrats. Between 2008 and 2012 this was the case for local political leaders too, appointed through “All Party Mechanisms”. Centralized misgovernance of the past two decades rendered development and resource allocation at the local level into inconsistence and unaccountability. And, today, the lack of elected village authorities means there is little co-ordination on the ground for distribution of relief materials. This has complicated distribution to the point that no assistance is arriving where it is needed most.

It bears noting that there has been no political will among Nepal’s politicians to decentralize power. All of the parties are stuck in the centralized, top-down model of governance. And, with power centralized and the centralized system in a prolonged impasse, the middle and local governance have languished.

Imagine if robust local and regional governance systems had existed when the earthquake hit? Then relief efforts would not suffer from the unplanned approach on display today.

The situation in the countryside is far worse, yet, almost a week since the quake, the truth of it remains largely unknown. It appears that in several districts, where millions of people live, most villages have been destroyed. Seismologists have estimated that the death toll as a result of the earthquake could reach as high as 50,000.

It is a reality that most villagers in need have not received relief. But, can one expect the State, which never reached out to its villages in the past, be expected to create an enormous mechanism and roads to reach the villages affected by the earthquake overnight? Had the State laid the foundations in the form of infrastructures and roads, and in the form of emergency mechanisms, a proactive approach could have been taken to provide assistance and to better manage the international assistance and relief distribution.

In Nepal while the government plays a minimal role in many people’s lives, it cannot expect only to receive support, but must be prepared to offer support. There are already reports of public anger directed at the authorities in regional towns. And, in Kathmandu too, those who have lost everything say they have received nothing from the government. There is a risk that this frustration, if not addressed quickly, could boil over.

One trend has become clear. There is a big difference in terms of who gets top priority. Those villages with better connections to people in power have got tents and supplies long ago, whereas many villages where vulnerable Dalit, Janajati and Madhesi residents live are still sleeping in the fields and in animal sheds. Even those that have accessed tents are worried though. Spending the monsoon rains in the tents will be difficult. The rains will begin in about a month, and it will be a busy time for rice and millet plantation.

Since the tremors began, Nepali communities around the world have poured in their support.

Nepali citizens have proven their unity and commitment to each other over and over again when pushed to the limit. Many youths and local groups in the country have realized their role and are doing whatever they can to help Nepal. Now it is time for the government to do so, too.