Home / News / BANGLADESH: Why does the NHRC fail to conduct a genuine investigation into the attack on FMA Razzak?

BANGLADESH: Why does the NHRC fail to conduct a genuine investigation into the attack on FMA Razzak?

We reproduce below a letter written to the Chairperson of the NHRC by the Asian Human Rights Commission complaining about their failure to investigate the complaint relating to the attack on FMA Razzak which took place on April 29, 2011. 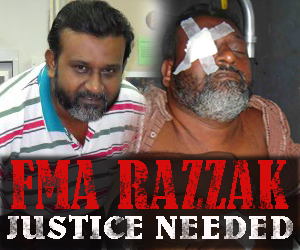 I refer to my earlier letter to you dated May 9, 2011 informing you about the attack on FMA Razzak and his brother, which Razzak believes to be initiated by Army Major Mustafizur Rahman Bokul and carried out by a large group of persons led by his brother, at which there was attempt to gouge out his eyes and very serious injuries were caused to his legs, arms and many parts of his body. He was hospitalized at Trauma Centre in Dhaka. I suggested to you to visit Razzak and inquire into this matter. I later informed you that no one has recorded a statement from Razzak, no judicial medical examination was conducted and that police officers conducting the inquiry have been observed to be partial towards the alleged perpetrators.

The Asian Human Rights Commission thereafter informed you about the visit of a member of its staff Bijo Francis. He met you 19 May.

At this meeting you agreed to visit and see Razzak on 23 May. However, we have learned that you did not visit him on that day or thereafter

The National Human Rights Commission’s obligations towards the victims:

When you met the AHRC representatives you told them that you have called the army officer, who is the alleged perpetrator, who instigated the attack against Razzak, and then you narrated what this man told about Razzak — that you summoned the Major and questioned him. As expected the officer has a counter case, starting from the claim that ‘had he been such an influential person, his father would not have been in custody now’. You pretty much parroted what he has been told by the Major, including that Razzak is a criminal, used to extort money from the people threatening that he would file cases against them, has been expelled from a former organisation he has been working with and so on as if you were in an attempt to convince the AHRC’s representatives that the Major’s accusations are true. You also informed us that after being informed about the case you had taken the initiate to enquire about Razzak through a local organisation that the NHRC has been working with, and that you have received information confirming the Major’s allegations against Razzak. You finished off by saying that Razzak is misusing his association with the AHRC to damage the name of the AHRC.

Thus, you had formed your opinion even without talking to the victim or his witnesses.

The most basic principle of natural law is to give a hearing to the parties. Here Mr. Razzak requested you to give him a hearing about this brutal attack. You did not think that it is your duty to do so. Instead you formed an opinion against him by listening to the very person who is accused of being the instigator of this criminal attack.

A Human Right Commission should conduct a genuine inquiry when the victims complain about abuse of rights.

The views you expressed on Razzak are unfair, baseless and false.

If you took the trouble to talk to Razzak and conducted a genuine inquiry, you would have found that Razzak does not have any criminal record at all. Further, you would have found that he is a popular human rights activist, who has engaged in helping local persons, mostly the poor, to write their petitions against wrong doings of the police and other authorities. For a well documented proof of this position kindly see http://www.article2.org/pdf/v08n01.pdf.

We recall that the law-enforcement agencies including the Army, Rapid Action Battalion (RAB) and the police made attempts to kill him and harass him in fabricated criminal cases.

In December 2002 during the Operation Clean Heart the army raided Razzak’s house and brutally tortured his wife, brother and aged father, who was arbitrarily detained in prison for several months under the Special Power Act-1974 when the armed forces failed to arrest Razzak while he was away. In late 2004 the RAB arrested Razzak arbitrarily, without any legal ground, with an alleged attempt to kill him in the pretext of crossfire. Fortunately, the human rights groups were informed by his family and intervened immediately, which compelled the RAB to release him within few hours on the same day. For further details, please see AHRC’s Urgent Appeal: http://www.humanrights.asia/news/urgent-appeals/UA-035-2007.

In November 2008, the Paikgachha police fabricated a criminal case of abduction and trafficking a teen-aged girl. The girl, who was the so called victim of abduction, was recovered later and told the police and the court that she did not know Razzak while she left her house due to certain family problems. The court discharged Razzak from the case for which he had to stay in jail for 27 days. The AHRC documented the whole issue in several publications, such as: http://www.article2.org/pdf/v08n01.pdf and
http://www.ethicsinaction.asia/archive/2008-ethics-in-action/vol.-2-no.-6-december-2008/families-suffer-more-than-victims-of-human-rights.

Are not even attempted eye gouging and brutal attacks a matter of no concern to the Human Rights Commission of Bangladesh?

The attack on Razzak was brought to the notice of the NHRC of Bangladesh through many sources, with the request
(1).For a genuine inquiry into the allegations
(2) For medical and psychological assistance to the victims
(3).For causing Judicial Medical Examination of the injuries of the victim
(4).For providing protection to the victim

We regretfully note that, so far no action has been taken, despite so many interventions with the NHRC.

An Appeal for Assistance: Make a donation for this campaign here:

« SRI LANKA: Kandy and Kahathuduwa Police refuse to investigate abduction of a girl