April 24, was the frightening Sunday for the poor families including shepherds and daily wage earners of different parts of the Baluchistan in a drive to punish Baloch folks for boycotting by-elections conducted under the supervision of military to get the candidate from ruling party to win.
The separatist and nationalist groups claim that the military operation is the part of “Crush resistance against China-Pakistan Economic Corridor.”

During this month of April, it is third military operation in the different parts of Balochistan where many persons were killed and disappeared after their arrests. Please see the link; http://www.humanrights.asia/news/ahrc-news/AHRC-STM-051-2016

The areas which came under the latest military operation are Tump, Gumazi, Mulant, Buleda, Dasht, Balitgar and Prom of Kech district. It is said that this is the fifth time operation in the Gumazi which is the strong hold of Balochistan National Movement (BNM) and every time the security agencies take some persons into custody and then it was hard to recover them. The whole district of Kech is completely cut off because of bombardment in the hill areas of the district. The people of these areas are advised by the security forces remain inside the houses and if any person, even, found standing at the roof top or before the windows will be shot, according to the local newspapers.

According to the Daily Tawar and daily Sangar and other online websites, early in the morning of April 24, the Sunday, the Pakistan military conducted operation in the areas of Baltgar, Buleda and prome and did aerial bombardment from Gunship helicopter and used land forces to attack on the houses. In the small towns of Kail Kor an Baltigar, land forces searched every houses, looted the valuable items and burnt down many houses. The smokes were still coming on Monday.

Whereas the in the mountainous areas of Buleda and Prome aerial forces did bombardment for whole night after which the entering points of the areas were cut off from the Balochistan. The security forces also made check posts in Kech and Buleda areas. Many parts of Buleda and Zamran areas were taken over by the security forces. During the night operation one 70-year-old shepherd, Mr. Arz Mohammad, was killed. According to reports many women and children were manhandled and injured during the new operation. 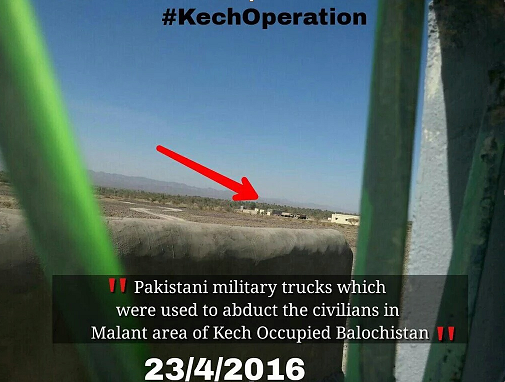 It is said that Kech, the former Turbat, district, one of poorest districts, remained since many years in the total control of Pakistan military the Frontier Corp (FC). The people were taken in to custody from the Tump are taken to a sub head quarter of FC at Turbat where they are tortured for investigation and then those who are suspected were taken to other unknown places in the provinces. Sometime after their mutilated bodies are frond from faraway places.

It is said by the media reports that military conducted a bye election on the five polling stations of a provincial assembly from where the person from the chief minister was elected through the rigging and the opponent candidate from National party of former chief minister, Dr. Abdul Malik, challenged the elections. The election commission found the rigging and conducted elections on the five polling station which were falling in these areas. The security forces were helping the candidate of chief minister from ruling party, PML-N and not providing any space for the election campaign for the opponent candidate. The National party and other candidates announced boycott of the bye elections which resulted in the form of military operation.

The security forces wanted to punish the population of the area who are strongly oppose the China-Pakistan Economic Corridor (C-PEC) which will link the country’s best sea port and local population are afraid of being turned in to minority and lose the political control of their province.

The security establishment of Pakistan want in any case to stop the resistance against construction of
C-PEC whether people are not considered as they did in Bangladesh during the freedom movement of Bangladesh.

« SRI LANKA:Kondaya, Raised to the Status of Mysterious Criminal

SRI LANKA: A TV Interview with Basil Fernando regarding the appointment of public officials in Sri Lanka »