That the Pakistan Military has been extending its tentacles to envelop the State apparatus is no secret. However, a lesser-known aspect is the economic hegemony it is perpetuating over peasants in the shape of Military Farms Okara.

Illegal land grabbing is now being used as a most profitable business for the force, which has anyway been guzzling a lion’s share of the national budget, depriving citizens their right to basic facilities like health and education. As a result, the struggle of the peasantry to own land they have been tilling for generations, which began in the British era, continues in the 21st century. This time it is the Pakistani State goaded by the Military that is denying citizens the right to own what is rightfully theirs.

17th April is the international day of Peasants to commemorate the day Anjuman Mazarain Punjab (AMP), a representative organization of landless farmers, had organized a convention to be attended by the farmers, civil society organizations and prominent human rights defender. The event was banned by the organization and section 144 PPC (assembly of more than 4 people is made illegal) was imposed in the area. On 16th April 2016 Mehar Abdul Sattar was taken into preventive custody on Saturday under the Maintenance of Public Order ordinance.

Despite the ban the event was held as per schedule. A tank was also deployed at the site of the event to intimidate the crows gathered; police also arrested many protestors on charges of terrorism. Thousands of peasant activists gathered in Okara and Dipalpur districts to demand an end to use of violent tactics by the state authorities and to seek the release of AMP’s general secretary Mehar Abdul Sattar.

Following the arrest protestors took out a demonstration by blocking GT road, the main artery connecting different cities of Punjab province, demanding Sattar’s immediate release. Tanks and military men in hundreds are currently deployed on the GT Road trying to clear the road.

A 17-year-old boy also died when a tear gas shell that was used to disperse the protestors hit him. To intimidate the protestors demanding release of Sattar, tanks were deployed and paraded in the village. Many protestors were arrested and charged under the Terrorism Act, Section 7, which proscribes anti State activity. 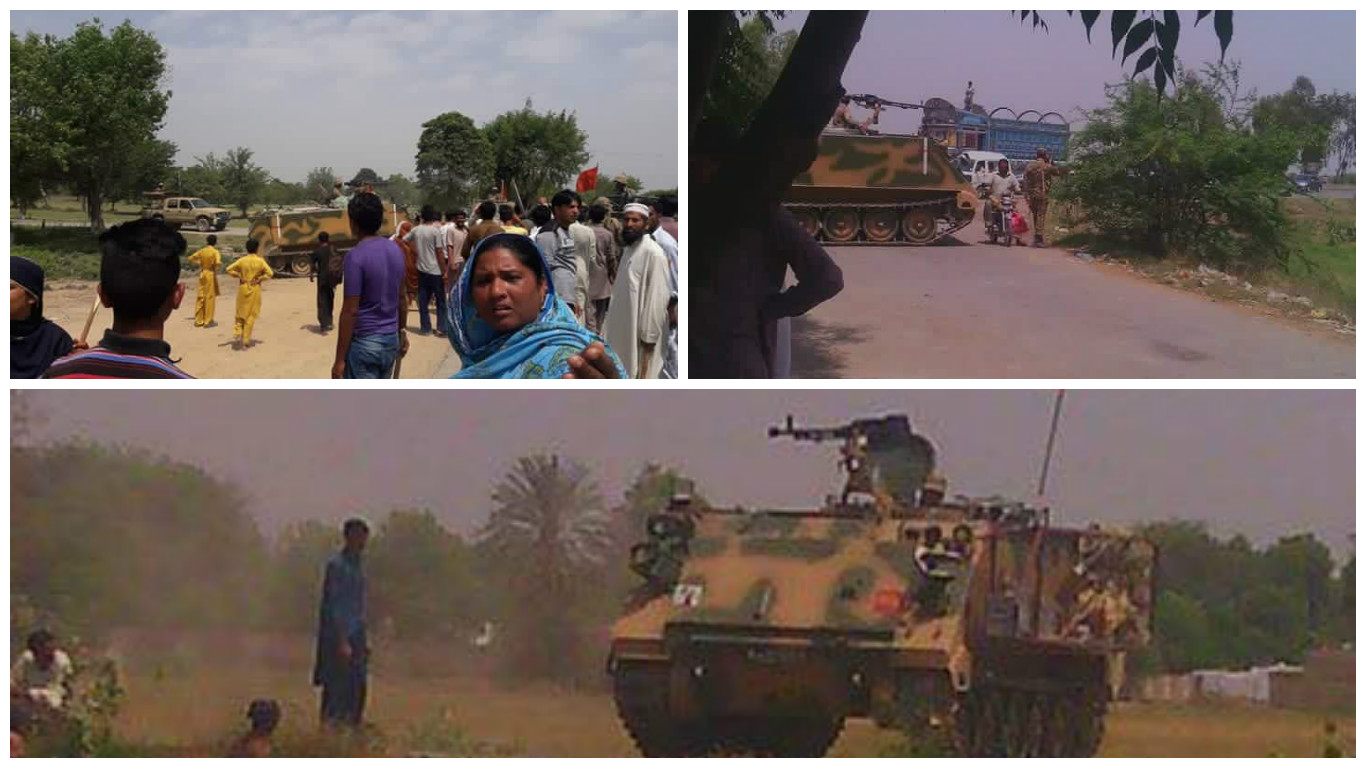 Asma Jehangir, the former UN Special Rapporteur and former president of Pakistan Supreme Court, in a press conference, condemned State actions. She said, “The military, the federal and the local provincial government must clarify their position regarding the suppression of protesting peasants in Okara. What is the criteria being used to determine legitimate threat to national security and law and order?”

Roughly one million tenants work on farms owned by the government of Punjab, in more than 10 districts across the Province. While the provincial government owns the land, the farms are actually operated by different government agencies, including the Military, the Livestock Department, and the Punjab Seed Corporation. These agencies have no legal claim to the land. Some of them had, at one point or the other, been lessees of the provincial government, but presently, none of the agencies are owners or lessees.

According to a subject expert, the actual owner of the land is the Punjab provincial government. The military pays a token fee to use the land, and two years ago, the Province refused an military request to transfer title to the property free of cost, according to a copy of a April 2001 letter from the Punjab Board of Revenue.

In 1999, the government promised to allot lands to landless tenant farmers. However in 2000 the system was changed whereby the peasants were changed from tenants to contractual owners and were required to pay annual rent. This infuriated the farmers and they organized themselves into a representative organization Anjuman Mazarain Punjab (Tenants Association of Punjab) in 2004. However, they were met with brutal repression. Violence and arrests have occurred as tenants have refused to give up their struggle for land ownership.

Since 2001, 11 farmers have lost their lives as a result of brutal force by the Military. The farmers aren’t even allowed the constitutional right to peaceful protest. The Military has time and against used brute force to silence the voice of the peasants. No media coverage of the peasants’ is allowed in mainstream media. Several journalists who have dared to defy the order have been arrested under terrorism charges.

The mighty Military is behaving like an occupation force with these landless, peaceful, unarmed peasants. Peaceful protests are being responded to with gunshots. None of the policemen or Rangers have ever been killed or injured during this movement. The Military’s insatiable lust for power, and the spiteful, will to have their way, by hook or by crook, has deprived the poor landless farmers their means of sustenance. The fight for right of ownership is marred by bloodshed, violence and brutal use of torture.

On 3 July 2014, the Rangers responded with indiscriminate firing on the farmers, and claimed two lives. According to a police official, the paramilitary force took away the bodies and a dozen farmers into custody. The farmers were refused the dead bodies unless they agreed they would not register a case with law enforcing agencies. The dead, along with the kidnapped farmers, were returned after three days.

Fortunately, the Judiciary has provided some reprieve. On 21 April 2016, the Lahore Anti Terrorist Court did not accept the public prosecutor’s argument seeking to charge the 5 protestors held under Anti Terrorist charges. The lawyer argued that demonstration is not an anti terrorist activity and no damage to any public sector building or personnel is been reported. Hearing the argument, the judge ordered the deletion of 7 ATA from the FIR, and asked the Okara police to present the accused in front of a local judge.

In another victory to the cause, on 20 April 2016, the Lahore High Court quashed the frivolous cases registered against Mehr Abdul Sattar. The poor peasants of Okara are being forced to except Military dictates as they are being enmeshed in frivolous cases, according to Muhammad Hanif, a senior defense analyst. Every farmer faces charges in 50 to 100 cases.

Military occupation of State land, and the demand of rent through brute force from the peasants, is not merely a blatant violation of the rule of law; it is a mockery of the institution of civil rule and democracy. Land grabbing by the Military is the biggest threat against the peasants, aggravating food insecurity, while violating human rights with impunity.

The Okara Farms highlight State inability to assert its legitimacy as the rightful authority over the mighty Military expanding its economic interest through real estate and occupying prime property through force and intimidation.

The Asian Human Right Commission (AHRC) strongly condemns the brutal action of the military and urges to the government of Pakistan to immediately release all the arrested person and withdraw the frivolous anti-terrorism cases against them. Government must take punitive action against law enforcement agencies including the officials military who have exceeded their authority by brutally torturing the protestors.

AHRC also condemn the denial of the right to peaceful assembly on the international day of the peasants to the farmers. The protestors were made target of state brutality to appease the military land grabbers.

The show of arbitrary and brute force agsint the peaceful assembly shows how much the state is afraid of the rising working class of Pakistan.
The AHRC supports the selfless and valiant struggle of the peasants for their right and salutes the brave soldiers for the ceaseless struggle against the military hegemony.