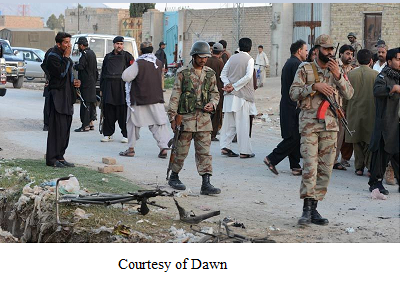 Pakistan’s security establishment has been conducting military operations in Balochistan since 2001, to obtain control over the Baloch land and resources. Tortured and bullet-riddled bodies of Baloch missing persons are found daily in the province. Resistance by the cornered populace is perceived as insurgency and a threat to national security. The construction of the China-Pakistan Economic Corridor has given the government further excuse to accelerate the military operation against the insurgency fighting for their legitimate right to control their resources.

The Baloch ethnic population perceives the Corridor project as a plan to convert them into a minority in their own homeland, and have openly opposed it on every level. This opposition has fuelled military atrocities such as burning houses and conducting aerial bombardments, victimising children and women.

During the past month, many Balochistan districts were seized by security forces. Many persons were killed, including children and women, while dozens went missing after arrest. In the latest development, some parts of the Bolan district have been seized. People are not allowed to go outside as security forces search for militant separatist leaders. All houses were searched, with women and children being manhandled and many persons injured.

In the area of Johan, district Mastung, the security forces bombarded at the civilian population and out of 35 killed only six were militants and remaining were civilians including one woman and five children. The government claimed that among the dead militants there was a prominent separatist, Mr. Abdul Ghani Bangalzai, who later on came to social media that he was not killed and still alive.

According to media reports, more than 100 persons were arrested on suspicion of being involved in subversive activities. These areas were also seized earlier in January, on the suspicion of the hiding of separatist leaders.

For many years, the security forces’ routine practice is to bring arrested persons before the media and claim that a huge quantity of arms including rocket launchers was recovered from them, but these persons are never produced before any court of law. The mutilated bodies of unknown persons however, are found every other day.

The Home Minister of Balochistan, Sarfaraz Bugti, confirmed on April 9 that 34 suspects were killed in a two-day operation conducted in the Johan area. He said the killed suspects had links to a proscribed outfit, whose key commander Abdul Ghani Bangalzai was also among the dead. A large cache of arms including hand grenades and explosives were said to be recovered during the crackdown.

The Baloch Republican Party (BRP) claims that around 40 persons were killed in military operations in different parts of Balochistan province on April 7, during which helicopters were used for aerial bombardments. Among the casualties were women and children. The Frontier Corp (FC) of the Pakistan Army was conducting a search for guerrillas from the Balochistan Liberation Army (BLA). During this year the FC has conducted several operations in their search for militants, during which more than 100 innocent citizens have been killed.

According to a BRP spokesman, a state sponsored armed group, locally known as a death squad, attacked and stormed into a house located in the Pullabad area of Panjgur district, and fired rockets. As a result of the brutal assault, seven innocent Baloch civilians including one woman were killed. The attackers managed to escape successfully. The victims are believed to be supporters of a pro-freedom political party. 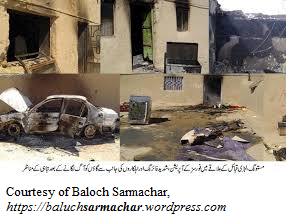 Earlier last week, five persons from the same family were killed in Patfeedar area by the Pakistani forces during an operation. The deceased have been identified as Hasoo Bugti along with his wife Shantul bibi and three children Shahoo, Rukiya & Naaz Gul. The abducted persons were identified as Loti Bugti, his wife Pazi Bibi, and sons Baggan, Jameel and Bashir, as well as the wife and children of Hayatan Bugti; Samreen bibi, Noor Khan, Nazghi and Noor Bibi.

The Human Rights Commission of Pakistan has shown distress at reports emerging from Johan, Kalat, and Isplingi, Mastung-Balochistan, indicating a high number of civilian casualties during an alleged army operation in these areas. Reports quote inhabitants to have seen 27 dead bodies being brought to Quetta Civil Hospital where no identification was allowed.

The Voice of Baloch Missing Persons (VBMP) in its recent report has stated that the cities of Kalat, Narmik, Johan, Mushkay, Awaran, Bolan and other districts of Balochistan are under the complete siege of state organizations. A large number of people have gone missing and women and children were harassed by state forces during military operations in these areas. The people of the affected areas have contacted VBMP and stated that a large number of people were abducted and killed during the military operation.

In Kalat district security agencies claimed up to 34 separatists had been killed. Included among the dead were the bodies of Sabz Ali, Pukar Khan, Khair Jan and Haji Mohammad Waris Lehri, who were later identified by their relatives. The four men were coming to their area Mungchar along with their relatives and livestock. After their extrajudicial killing in custody, the law enforcement agencies refused to hand over the bodies to their families.

Quoting local media, VBMP says only 23 dead bodies were brought to the civil hospital in Kalat; no one knows where the other 11 bodies are. Reports claim that the majority of the victims were local shepherds and farmers, who were heading towards Mastung, when forces stopped them, made them stand in a line and shot them one by one.

On April 9, Deputy Commissioner of Kalat district instructed that the dead bodies should be immediately handed over to Edhi Center, a charitable organization, who runs for swift burials. This proves that the government is hiding the real facts, because in previous military operations the dead bodies were identified by relatives.

To hide their atrocities, the security agencies are blaming the Baloch unrest as driven by India, after the arrest of one Indian retired naval officer as an Indian agent involved in the Baloch insurgency. Due to the civilian government’s lack of control on the local affairs of Balochistan, the security forces are using brute force and are trying to resolve political issues with guns. The indiscriminate use of force cannot be permitted under any circumstances, as it will further alienate the people of Balochistan and is unlikely to win any support for the government or security forces.