The current government in Pakistan has proven to be a bane on freedom of expression as more journalists are reportedly being attacked. Six months into the year, 2017 and 2 journalist have already lost their lives in Pakistan.

The federal capital is witnessing a surge in assault on journalist as two journalists from different media houses were attacked and injured within a week. As per media reports, Aizaz Syed, a senior journalist was stopped by armed men who came in a car and motorcycle and tried to kidnap Aizaz but he managed to flee.

In another incident Zeeshan Ali, who works for the Iranian official news agency IRNA — was injured after having been tortured by two armed men in Islamabad. The assailants snatched two cameras and other belongings of Ali and also tortured him

Pakistan ranks 139th in the press freedom index, while ranking among the bottom 10 countries for supporting free speech in the global index by Pew Research Centre. According to a report by the International Federation of Journalists, Pakistan is the fourth most dangerous country in the world for journalists, with 115 journalist killings since 1990. The year 2017 has seen two journalist deaths so far. Unidentified assailants shot Mohammad Jan from Kalat, Balochistan in January, while a cameraman for the privately owned Samaa TV, Mr. Taimur, was fatally shot in February.

There has also been a dramatic rise in censorship on both electronic and print media under the pretext of national security and blasphemy. Journalists, together with scholars and other activists, are routinely attacked for writing and commenting on religious extremism and abuses by security forces.

Meanwhile, the government has failed to prosecute people who have attacked journalists, thus providing perpetrators with impunity.

The impunity enjoyed by those who attack journalists is seriously hampering press freedom in Pakistan. According a report prepared by Reporters Without Borders, role of non-state groups — often militants such as the Islamic State group (ISIS) —is rising in terms of perpetrating attacks against journalists.

In January 2016 two journalists lost their lives at the hands of unknown assailants. The office of a TV channel was also attacked with explosives in the same month and ISIS claimed responsibility on 13 January 2016. Incidents of threats, attacks, and killings of journalists in Pakistan are clear evidence of how critical the situation has become due to thriving culture of impunity. Pressure and intimidation has forced journalists in Pakistan to adopt self-censorship, particularly in conflicting areas.

It is lamentable that though on face value Pakistani media looks very free, in reality it is under attack from all sides. Journalists have to risk their lives in the line of duty. The growing intolerance within the society has made reporting of truth a culpable exercise. No State institution, be it the Judiciary or the Executive tolerates criticism – a sign of immature institutions. Many journalists are facing treason charges and lower courts have issued arrest warrants without giving them an opportunity to justify themselves.

According to the freedom index, released by Reporters without Borders, an advocacy group working for media freedom around the world, Pakistan is ranked 159 out of 180 countries. The International Federation of Journalists has cited Pakistan as being the most dangerous country for journalists in the world, with 14 journalists killed in 2014 alone. 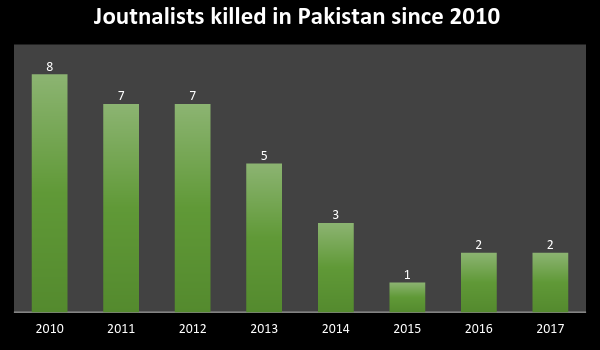 Freedom of expression and the Pakistani establishment have always been strange bedfellows. The freedom to express one’s thought and views are only permitted and encouraged on paper. Since its inception, 70 years ago, the Pakistani State has been grappling with the existential questions of democracy, autocracy, dictatorship, and sharia laws.

The liberty to speak one’s mind without fear of repercussion is fast shrinking. The masses live under constant fear of being trolled online, harassed and threatened in the real world. No one dares speak for his or her rights, or in favor of the marginalized, as if it has become a de facto crime. To condemn religious extremism, mass corruption, and military dictatorship is akin to blasphemy and is not permitted.

The Federal investigation Agency (FIA) has become a tool of oppression and is used to interrogate and target social media activists for exercising their right to freedom of expression on social media. In March 2017, FIA arrested and interrogated an activist arrested for allegedly criticizing the armed forces on social media. The FIA also obtained a two-day physical remand of the activists who was booked under sections 20 and 24 of the Prevention of Electronic Crimes Act (harming the reputation of a person and cyber stalking), and sections 419 and 500 of the Pakistan Penal Code (impersonation and defamation).

Freedom of expression is gravely endangered at present, with Pakistan’s Cyber Crime Wing of the FIA ordered by the Interior Minister, Chaudhry Nisar Ali Khan, to take immediate action against any person or group involved in dishonoring or maligning the Pakistan Army on social media. As a result, more than 200 activists were taken into custody in recent times. While most have been released, their laptops and cellphones were confiscated for some days, and all the data was erased.

Curbing free speech over social media is a new tactic of the Pakistani government for political gain and to prevent defamation. To appease the military, the Interior Minister announced that criticism of the military will not be tolerated, in addition to the media blackout on military operations.

Without freedom of expression, the populace is reduced to a herd of sheep led to their slaughter, silent and subdued. In the face of religious extremism, it has become increasing imperative for activists, being champions of human rights and dignity, to resist and raise their voice amidst deafening enforced silence.

The AHRC urges the state to desist from curbing the fundamental freedom of the people that is guaranteed to them under the constitution. It is about time that the state realizes that criticizing the state or the armed forces is not tantamount to attack on sovereignty of the state and should not be construed as such. The AHRC demands that the perpetrator of violence against the journalists should be brought to books and given exemplary punishment to bring the trend of violence against the journalists to an end.