Home / News / INDIA: A clown judge is the prelude to right-wing forces completely destroying the republic

INDIA: A clown judge is the prelude to right-wing forces completely destroying the republic

A former judge of Rajasthan High Court, Mr. Mahesh Chand Sharma, has claimed that a peacock does not mate with a peahen to breed, and it was because of this quality that it was declared India’s national bird. Elaborating his knowledge on the subject, Sharma said “a peahen gets pregnant after swallowing the tears of the peacock.” 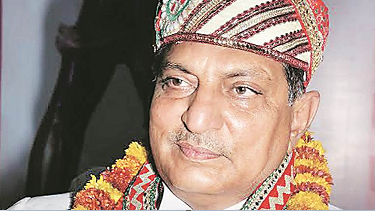 The judge was answering questions from journalists about the logic in the Indian constitution that he has relied upon when he recommended the Union Government to impose a total prohibition on cattle slaughter in the country, and for his direction to the government to consider imposing life imprisonment for those who slaughter a cow for its meat.

The judge elaborated his Brahminical logic, which he claimed is also “the reflection of his soul” and said that “no crime is heinous than cow slaughter.” In his judgment, Sharma appointed the state’s Chief Secretary and the Advocate General as the legal custodians of the state’s cows, and recommended the state to consider cow as a “legal person.” Despite his ‘slaughter of the constitution’ Sharma retired from service on 31 May 2017, with full pension.

A reading of Sharma’s judgment and the logic elaborated therein – a public interest litigation that his bench was called upon to decide – might be abhorring, or comical. However, Sharma’s verdict reflects the reality in India, where hard-line religious influences are increasingly occupying the front seat, when public institutions are called upon to discharge their duties.

India has never been a truly secular state. Secular values, largely are limited to the preamble of the constitution. They have never been the priority of governments for implementation. Any claim beyond this is false, like India’s assertion that ‘it is the largest democracy of the world.’

Over the years, governments have unfairly favoured various religious factions, one over the other, for mere electoral gains. Religion and caste have always remained the denominator of Indian politics, and for public policies. State leaders have openly affirmed their faith in religious practices, often at questionable lengths.

Presidents, Prime Ministers, Chief Ministers and other state functionaries in India have violated this constitutional writ. Governments have often gone to the extent of amending or drafting laws to please religious leaders.

There are Chief Justices who have openly lobbied for the appointment of judges on the ground of caste or religious affinities. Political parties decide candidatures of ministers on similar basis. School text books are rewritten portraying religious myths as historic facts. Every major religious group in the country has exploited this weakness of the Indian administration for their petty benefits.

This partisan approach, of pleasing dominant religious groups controls what is understood as democratic processes in the country. Elections in India has always been decided along caste and religious lines, with people’s active participation. Even the so-called secular political parties practice this evil. In fact, genuinely secular entities are rare in India.

Secular ideals have long lost its value in India. The draconian principle of might is right occupies the centre stage of Indian politics. This has led to the demise of an organised secular opposition, and has paved way for right-wing forces to usurp power, of which the latest example is the incumbent Union Government.

The rise of the BJP to national power, and the very fact that they will remain in power for extended terms, highlights the mass support right-wing forces and their ideals receive in the country. It is unfortunate for India that the country’s media also supports this evil that is passed off as the great Indian identity. Hardly any media undertakes a critical and thoroughgoing analysis of policies implemented by administrations and the bogus claims governments make.

It is in this melee that persons who occupy offices of authority, like Sharma, and their public statements should be analysed. India is today descending into a deep right-wing abyss. This will soon result in largescale and widespread communal and religious conflicts that will not only adversely affect the nation, but also the region.

The civil society in India must not forget, that the incumbent Prime Minister and the political party he leads are responsible for the 2002 Gujarat massacre. Equally, opposition parties like the Indian National Congress, though they have only a handful members in the national parliament and in the state legislatures, also have the bloodied past of orchestrating communal violence.

India is a state that is undergoing a genocidal priming. Perhaps if not at any previous occasion, it is today that India’s civil society must remain vigilant and act steadfast. For this, the country’s secular civil society leaders and institutions must shed their lethargy and see the impending dark clouds of violence mushrooming in the horizon, and take all measures possible, to prevent this dark cloud from engulfing the nation.

« INDONESIA: Stop persecution against the right to freedom of expression and opinion

SRI LANKA: Another innocent man illegally arrested and prosecuted on a fabricated charge by the Teldeniya Police »