On March 24, pictures of four detainees, one of them a woman, with their hands chained and padlocked together, circulated online. The photos were taken by Bong Son, a newspaper photographer, while the detainees were being transported to another detention facility in Manila City. 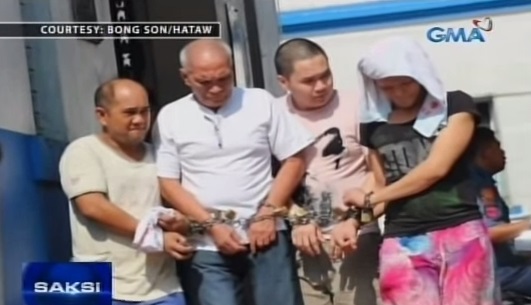 In response to public condemnation, Senior Supt. Rolando Nana, director of the Manila Police District (MPD), suspended two of the jail officers involved, namely SPO4 (Senior Police Inspector) Roberto Quillope, and his colleague, Inspector Danilo Soriano, while investigation into the allegations against them is pending. But Nana has already defended the actions of the policemen—chaining and padlocking the suspects—before the investigation could begin, let alone be completed.

In an interview with a newspaper Tempo, Nana was quoted to have said “the jailer’s action is permissible in the interest of the safety and security of jail officers,” and cited section 4 of Article 235 of the PNP law, as the legal basis of his men’s action. He further said the policemen involved had ‘no intention to maltreat’ the detainees and that even though they have handcuffs available, to chain and padlock the suspects was “the best way for him (policeman) to handle the inmates.”

In a separate interview, jail officer SPO4 Quillope showed no remorse and defended his actions, in this report by GMA News TV here (time code 1:00-1:15):

“Based on experience. Maraming nakulong dyan na henious crimes, yun ang iniiwasan ko. Yung mang-aagaw, o ma-agaw; o kaya kami naman ang gamitin para makuha nila yung mga criminal. (There are so many detainees who are accused of heinous crimes. We are avoiding (an incident) that they could (grab our guns) or the colleagues of this criminal would rescue them).”

The statement by the jail officers labelling the detainees as “criminals” is an outright disregard of the fundamental principle of the presumption of innocence of these pre-trial detainees. Moreover, the AHRC is deeply concerned by the two policemen and their commander’s disregard to the operational procedures they are meant to observe while taking persons into custody.

First, the legal provision that Colonel Nana used in defending his men, “section 4 of Article 235 of the PNP law” is a non-existent law. Guidelines regarding transporting detainees from one place to another are stipulated in the Philippine National Police (PNP) Operational Procedures (POP) in 2010, which they clearly violated. Under section 3, Rule 15, on custodial investigation, the manual requires only the use of handcuffs, and not “chains nor padlocks”.

Consistent with the controlling principle “that he must use the minimum necessary force to accomplish his mission”, the Ground Commander shall equip the CDM contingent only with rattan stick, shield, Kevlar helmet and handcuffs. (Italics are ours)

The purposes of putting handcuffs on any persons under custody, notably those accused of criminal offense, is to restrain their movement. In restraining persons, the policemen are expected to “use the minimum necessary force to accomplish his mission.” For those under complete control of the police, there should be no unnecessary force.

In this case, Senior Supt. Nana defended his men, arguing that the detainees should have thanked the policemen because “chaining and padlocking” their hands at their front rather than their back, gave them more convenience. Had it been at the back he said, “..masakit yun. Mas imobilize yung mga tao. Mahihirapan yun lalo na kapag isinakay sa mga sasakyan (it would be more painful. It would be more difficult for them (detainees) if they are taken inside a vehicle for transport).”

Putting restraint on any persons under police custody is neither for the purposes of convenience to the suspects, nor the policemen. The principle is to ensure that the treatment of detainees is humane, and the force used is proportionate, to make sure the detainees do not escape from police custody. While the AHRC understands the concern from past incidents of detainees grabbing guns from policemen, however, to put the detainees in “chains and in padlock” is not humane treatment or proportionate force.

Third, the AHRC regrets that Senior Supt. Nana has already exonerated his men from criminal liability under section 5 of the Anti-Torture Act of 2009, even before an investigation is completed. The law considers cruel and inhuman treatment of persons under police custody “sufficient to cause suffering, gross humiliation,” a criminal offence. Senior Supt. Nana must correct his earlier statement of citing a non-existent law to defend the action of his men. Ignorance of the law is not acceptable, particularly from those expected to enforce the law.

Finally, we share fully the observations of the Commission on Human Rights (CHR) declaring the treatment of the police towards the detained unacceptable, and for reiterating that handcuffs, not chains and padlocks, are to be used on detainees. The AHRC is concerned by the apparent bias of the police in investigating their own men; therefore, we also urge the CHR to conduct a separate investigation on this case.