INDIA: Does model code of conduct allow mocking the murders?

What should the government do when farmers commit suicide in an extreme response to massive crop failures? Mocking these suicides would certainly not figure as a possible response in any sane mind. But that is exactly what Chief Minister of Maharashtra did when alerted to 22 more farmers ending their lives as noted by the Vidarbha Jan Andolan Samiti, a farmers’ advocacy group. All that the minister had to offer to the farmers standing at the verge of turning into statistics in gloomy and yellowing pages of the statistical data maintained by the National Crime Records Bureau was an appeal to farmers to not take “emotional steps” and instead “wait for” relief measures without offering any concrete steps to arrest the worsening situation. Common sense does not seem to hold ground for those in power, does it?

As it is, all suicides are driven by extreme emotional despair. But this despair is caused by something else, in this case: crop failure, an economic reason. The prolonged and unusual hailstorm that destroyed the crops was sudden, but crop failures leading to farmers’ suicides have been fairly common in the state known as “the Suicide Country”. What had the government been doing all this while? As if this negligence was not enough, the Chief Minister asked the farmers to wait while he checks with the Prime Minister and the Election Commission if declaring a relief package would violate the model code of conduct. The code that bans parties from making any announcements that can influence voters is currently in place owing to India planning for a general election this summer. 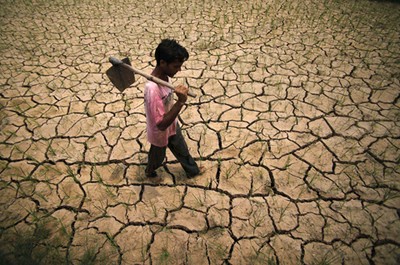 The farmers, unfortunately, do not have enough time to wait for political dithering. The 200,000 who committed suicide since 1997 did not either. They are facing the brunt of a deepening agricultural crisis brought about by a vicious cycle of droughts, floods, and an aggressive promotion of cash crops by different state governments. The democracy must be haunted by many questions such as: if it can live with denying its citizenry their right to life because election code of conduct is in place? If it does who would be responsible for these deaths, abetting these suicides to be precise? Why is there no system in place to address to such crises?

That these questions are seldom acknowledged is baffling in itself; complete inaction, especially when alerted to a crisis, is just intolerable. The Chief Minister of Maharashtra, for example, has asked for a special relief package worth INR 5,000 Crore from the central government. These demands bring us to the next question regarding the fate of earlier relief packages offered to crisis ridden states, with Vidarbha and Bundelkhand readily coming to the mind. The much touted Vidarbha package, totaling INR 3,934 crore, did not help the situation a bit. In fact, it was not even actually released until the second half of 2013 because the government neither issued a resolution nor submitted a formal proposal to be considered by the Union Cabinet. Remember that there was no model code of conduct in force then. So much for the seriousness of the government in tackling the crisis.

Similar was the predicament of the relief package worth INR 7,000 crore offered to Bundekhakhand, which has been fighting a drought for 8 years now. We know that the money was released is all but not where it went. The distress continues, and so do distress migrations and suicides accompanying it. The area, chronically short of water, has been seeing water wars ending in people stopping marriages of their children to residents of this area. The situation had not emerged overnight there either. It was long in making with the governments, both provincial and central, fully aware of it. The droughts have caused repeated crop failures and made the farmers dependent upon local moneylenders charging exorbitant rates like 10% per month for ensuring a mere survival compared to the 9% annual rates offered by the public sector banks. Even the cooperative banks established for addressing the needs of the farmers have failed to save the farmers from these loan sharks. This is what leads to the borrowers getting insulted even on a single default thus triggering suicides to reclaim their lost honour as many cases show.

Despite Maharashtra and Bundelkhand having emerged as the “suicide country”, the situation is not any better in many other states. These include even the ones like Gujarat touted for their “growth” model where 135 farmers killing themselves in 2013 alone. Ironically, the state governments tend to deny these deaths except when asking for special packages to address the crisis. These packages, as explained above, often fail to be delivered on the ground and most of the money leaks to the corrupt and criminal nexus of bureaucrats and political leaders.

Need one say then that the Indian state has abandoned its peasantry and it is complicit in abetting these suicides? The only way forward is to radically restructure the system that perpetuates the vicious cycle crop failures followed by loans that end in death. This restructuring would involve immediate implementation of land reforms, construction of a robust and sustainable irrigation system to tackle Monsoon failures, making seeds and fertilizers available on affordable rates, enabling even the marginal farmers to borrow tractors, and investing heavily in sustainable agricultural techniques. Simultaneously, any attempt to stop the deaths would need to snatch peasantry out from the stifling grips of the moneylenders. This can only be achieved by putting in place an affordable and accessible banking service tailor-made to cater to farmers’ special needs. No amount of relief packages are going to end this blot until then, whether or not a model code of conduct in place. And that is only if the provincial governments actually claim the money after it is announced instead of only pretending to be working.

NEPAL: Request to the United Nations High Commissioner for Human Rights to pay special attention to the demand for justice by the parents of the murdered Krishna Prasad Adhikari, on the 146th day of their hunger strike »