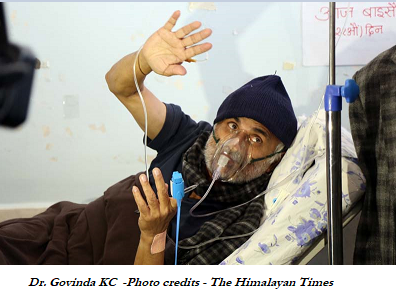 The Asian Human Rights Commission (AHRC) is concerned at the deteriorating health of Dr. Govinda KC, who has been on an indefinite hunger strike in Jumla district since 30 June 2018. Dr. KC, a senior orthopedic surgeon, is seeking reforms in the country’s medical education sector. In particular, he is demanding the enactment of a National Medical Education Act, and other reforms based on the agreements reached between him and the government earlier.

After his health deteriorated, Dr. KC has been receiving treatment in the special ward of the Karnali Academy of Health Sciences (KAHS) in Jumla. His blood glucose level is gradually decreasing and he is having muscle cramps, nausea and a low white blood cells count. He also has very low magnesium in his blood, which is dangerous as low magnesium could cause the heart to stop. Dr. KC has become weak and unable to speak. Dr. KC had also refused the service of doctors sent by the government from Kathmandu to treat him.

Dr. KC has been demanding that new medical colleges should not be established in Kathmandu Valley for the next 10 years and that a single university cannot give affiliation to more than five medical colleges, in line with the recommendations of the commission led by Kedar Bhakta Mathema, a former vice-chancellor of the Tribhuwan University. The Mathema panel also suggested requiring medical colleges to have a hospital operational for at least three years, prior to running medical courses.

The government must act quickly in order to save the life of Dr. Govinda KC, a lone crusader fighting against Nepal’s medical mafia to reform the country’s medical sector. It must particularly be noted that Dr. KC is not carrying any political agenda, but only fighting for the wellbeing of ordinary citizens.

The AHRC urges the government of Nepal to save Dr. Govinda KC’s life immediately. The government must bring about the National Medical Education Act in line with the Mathema panel, and adhere to past agreements made with the Dr. KC at the earliest, for the benefit of the ordinary citizens of Nepal.