Home / News / PAKISTAN: The government ignores the historical long march for the recovery of disappeared persons

PAKISTAN: The government ignores the historical long march for the recovery of disappeared persons 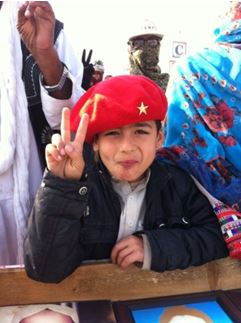 The Baloch long march, under the banner of Voice of Baloch Missing Persons (VBMP) has broken the record of Gandhi’s longest march of 390 kilometers from Ahmadabad to Dandi as a protest against the tax on salt by colonial power.

The long march was started on October 27, 2013 and reached Islamabad on February 28, 2014. World records have been made by Mr. Mama Qadeer, 72, and Master Ali Haider, 7. The sisters and brothers of the missing persons were to be found in the caravan.

As the long march was getting closer to its destination, hundreds of people, including civil society organizations, welcomed the marchers. As an act of solidarity they took part of the last 100 kilometers before reaching Islamabad. The participants presented a memorandum to the UN country office in Islamabad, which has given positive response to the leaders of the march, Mr. Mama Qadeer and Ms. Farzana Majeed.

According to The Express Tribune, the four page memorandum demanded the UN to investigate issues of missing persons; target killings; enforced disappearances; alleged involvement of agencies in heinous crimes; and a UN fact-finding mission to investigate mass graves and international standard DNA tests to identify bodies.

United Nations Information Centre Director Vittorio Cammartoa, who was also a part of the meeting, told The Express Tribune that UN Resident Coordinator Lola Castro, and ILO Country Representative Francesco d’Ovidio, who is also chair of the Human Rights Task Force, was part of the meeting. Cammartoa said that the concerns of the marchers were handed over in the form a petition which was addressed to UN Secretary General Ban Ki-moon.

“The petitioners were assured that their request will be promptly forwarded to Secretary-General’s office in New York and to the Office of the High Commissioner for Human Rights in Geneva for follow up,” said Cammartoa.

The delegation of the long march was satisfied with the assurance given by the officials from the UN mission.

Since the arrival in Islamabad, the government has not given any affirmative response to the participants of the long march, whereas some members of the parliament have urged Prime Minister Nawaz Sharif to invite the participants, who have written history with their peaceful protest across the country, to a talk.

The long marchers have been invited by the office of the European Union, showing solidarity in their cause for the recovery of missing persons. The U.S. Embassy has also contacted Mr. Mama Qadeer and has shown willingness to meet the delegation.

The government’s indifferent attitude towards the issue of the disappearances of thousands, and the continuous practice of extrajudicial killings in Balochistan, demonstrates that the government has no control nor does it want to control the activities of state intelligence agencies and military, whom are blamed by the family members of the missing persons as the perpetrators.

The rejection from the Prime Minister to meet the long marchers illustrates that his government does not want to annoy the military and intelligence agencies who are running parallel government and are autonomous in their actions.

In the interim, military operations continue unabated. In the past few weeks at least 8 people have been abducted from Jhabar Kohistan Marri, and Sibi, more than two dozen Bugti tribesman from Sui and Dera Bugti and at least 38 people from Jhao and the surrounding areas in Awarn Balochistan.

The Asian Human Rights Commission (AHRC) strongly urges the international human rights community to treat the problem of enforced disappearances in Balochistan as one of the top priorities of the civil society organisations and to take appropriate action with the government of Pakistan, as well as the relevant authorities in their own countries and the relevant United Nations agencies. The AHRC also calls upon the Human Rights Council of United Nations to constitute a fact finding mission to probe the presence of mass graves in the Balochistan.