PAKISTAN: International Labour Day – Government must align itself with the ILO conventions

Given the lack of any basic medical care, health teaching, affordable housing, universal education, clean drinking water and a decent way of life including the right to life–the demand for labour rights sound hollow and meaningless. Feigning regard for this class, society is deeply prejudiced against celebrating Labour Day in Pakistan. Hardly any respect is paid to the work of labourers who put their lives on the line daily just to earn enough money for two square meals a day. 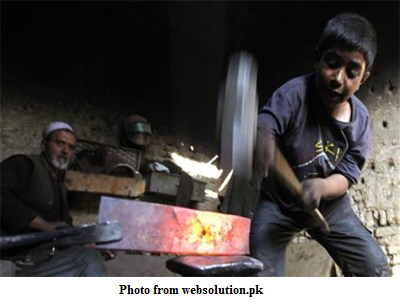 From brink kiln workers to labourers working in the ship-breaking industry, hazardous working conditions go unchecked. Hiring underage workers is a crime under the law, yet one may find a great number of children working in severely hazardous industries. And no mill owner is ever penalised for the offence. Domestic child labour is one of the most common forms of child labour in Pakistan. Torture and even the murder of children has been attributed to employers. A marginalised and abused labour class is forced to live from hand to mouth due to inadequate government policies, capitalists, landed aristocracy and their hegemony over resources.

The complete lack of state control has resulted in the rise of a neo-slavery situation where peasants and brick kiln workers mortgage future generations to the land owners in exchange for a few thousand rupees per month.

Pakistan ranks third in the Global Slavery Index. A weak rule of law, widespread corruption and poverty reinforce political, social and economic structures of modern slavery in Pakistan. Bonded labour is most common in the brick kiln sector, with the majority of kilns in Punjab and Sindh provinces. The government has had a limited response to modern slavery. They largely just provide basic victim support services, a limited criminal justice framework, limited coordination or collaboration mechanisms, and few protections for those vulnerable to modern day slavery.

Around 2.3 million brick kiln workers all over Punjab are subject to a bonded labour system. They are denied their basic fundamental rights, including social security and the Minimum Wage Award of July 2013, i.e. Rs. 740 per 1,000 raw bricks made. Workers are paid only Rs. 400 per 1,000 raw bricks. They are victimized for demanding their just constitutional and legal rights be honoured. Workers struggle to end the bonded labour system, to ensure social security, fair wages, and a decent work environment. These demands have become life threatening for them.

The AHRC has reported incidents where high-ranking police officers have been operating brick kilns and keeping the workers in private torture cells. Feudal landlords, particularly from Punjab and Sindh provinces, affiliated with political parties, employ bonded labour and protect their involvement in bonded labour. They use their political, social and economic clout and influence to continue this practice. In January 2015, the Supreme Court (SC) heard the petition of a criminal case filed in 1996 against two landowners including a former member of the Provincial Assembly. They reportedly used thousands of forced agricultural labourers in Sindh’s Digri and Sanghar provinces. The labour group, responsible for the original court petition, claimed that the landowners used their influence in the Provincial Assembly to intimidate bonded labourers and their supporters

The workers employed in the ship-breaking industry are no better off. The industry, that is notorious for being more dangerous than mining, employs a workforce of 6,000 direct workers. It pays them a paltry daily wage of Pak Rupees 500 to 800 (US $7 to $11). Due to a lack of protected working conditions, workers are forced to work in hazardous situations with complete disregard for their personal safety. The workers are exposed to many carcinogens, toxins, and other hazardous materials that can potentially maim them for life. Due to the lack of legislation on importing hazardous waste into the country, workers are exposed to dangerous waste material dumped by industrialized nations.

In November 2016, in one of the worst cases of fire at the Giddani ship-breaking yard in Balochistan, 26 people lost their lives with more than 100 reported missing and feared dead. It is likely that those who were missing were burned to ashes. These were washed away by the water used to douse the fire that raged for three days. To date, not a single worker has been compensated by the contractor or the government. Though numerous workers were maimed for life, they received no aid from any public or private quarters to cover their medical expenses.

Sadly, in Pakistan, the children of labourers are caught in a vicious cycle of poverty from which they can never escape. Pakistan has been ranked third in the world for having the largest children’s workforce. According to statistics taken from the International Labour Organization (ILO) report for 2014, a decline has been observed throughout the world in the number of underage workers. Yet–Pakistan remains in the third spot with the highest prevalence of child and forced labour.

Take the case of Tayyaba, a child maid. She was brutally tortured by her employer, the wife of a Magistrate. This testifies to the failure of the State to provide for the weak and vulnerable. The case also calls attention to the larger issues of labour–domestic labour, and child labour in the country. Labour laws in Pakistan are ineffective and inefficient at curbing the practice of child labor. When a judicial office – a guardian of the law – is itself abetting child labour by hiring an underage girl child as a domestic helper, how can one expect the general public to be any different?

Taking advantage of a person’s poverty, influential torturers get away even with murder, by paying the aggrieved family hush money. The practice of paying hush money as compensation to the underage maid is fairly common in Punjab where most of the cases of abuse of domestic servants occur. Urban areas are particularly notorious for the practice.

The families of the victim are too poor to take the employer to court. As a result, in almost all cases of abuse, the abuser is “pardoned” by the heirs. Having many mouths to feed, the family often forces the victim to continue working at the house of the abuser.

The Institute of Social Justice reported 29 child house-workers’ deaths from torture between 2011 and 2015. In 2013, 13 children died as a result of violence at their work place, in addition to 21 cases of physical torture by employers. According to SPARC’s Annual Report on the State of Pakistan’s Children, 2015, there are 264,000 underage domestic workers experiencing cruel and unsafe working environments. They are often left to the mercy of their employers who routinely subject them to physical and psychological abuse, exploitation, and violence.

To counter the violence and abuse of the labour force in the country, the Government should formulate and implement labour laws on a par with international norms and conventions. Stringent and coherent policies should be enacted and implemented to make the working environment safer for labourers. At the same time they need to ensure that the requirements of labour rights, according to the International Labour Organization, are met.

Domestic and other informal sector workers must be given access to social protection. Their minimum wages must be regulated. The State should ensure the inclusion of an informal sector representative in the tripartite mechanism. It needs to make amendments in the labour and the child labour inspection mechanism for adherence to the existing laws, child protection laws, and the Punjab Employment of Children (Amendment) Act, 2011

Labour legislation should be adapted by the Government and aligned with the provisions of the ILO conventions. They have to continue to spearhead progress toward gender equality and development for women in the areas of education and employment. No country in the world can prosper without the progress of its labouring class. It is time for government and policy makers to realize their shortcomings in this regard and work to invest in the training and uplifting of the labourer. Paying lip service by observing Labour Day is an exercise in futility if the State does not fulfil its responsibility that it owes to its economically vulnerable citizens.